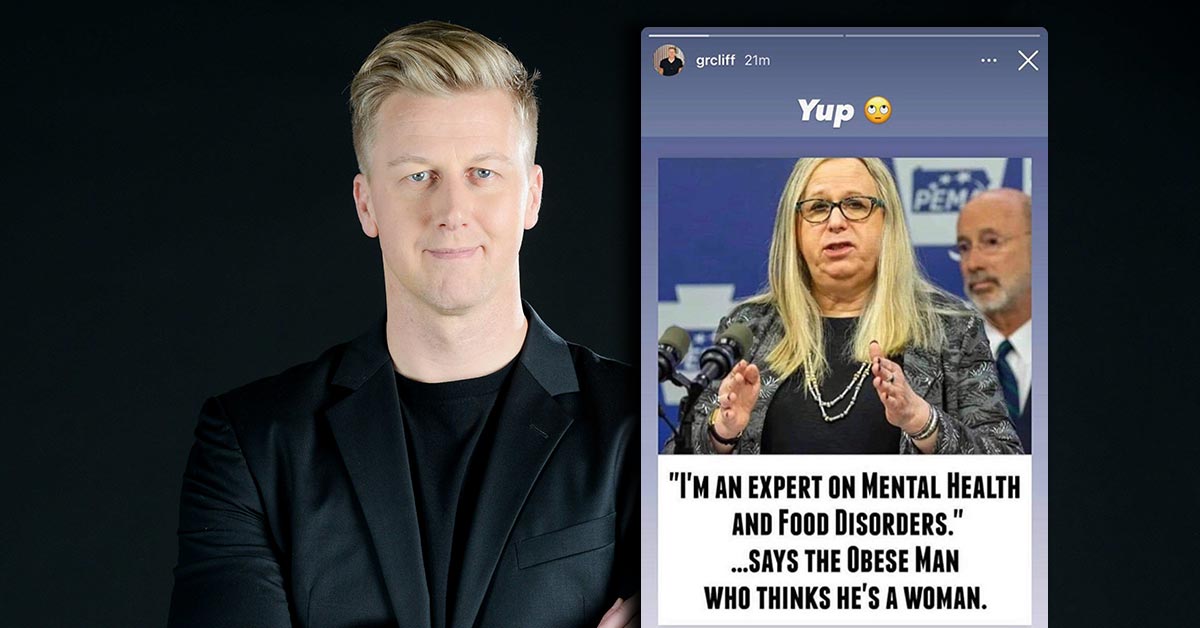 The meme features a picture of the recently-appointed US Assistant Secretary of Health, with the statement: “‘I’m an expert on mental health and food disorders.’… Says the obese man who thinks he’s a woman.”

Aside from the juvenile body shaming, the meme suggests that Levin is delusional in thinking she is a woman and therefore cannot pronounce on mental health issues. This infers that her transgender identity is not legitimate or “real” and is a mental disorder.

Levine who previously served as the secretary of the Pennsylvania Department of Health is a professor of paediatrics and psychiatry at the Penn State College of Medicine. She is also an author on the opioid crisis, medical marijuana, adolescent medicine, eating disorders, and LGBTQ medicine.

MambaOnline contacted Cliff, who confirmed he’d shared the post, although he insisted that he is a supporter of transgender rights.

His beef with Levine, he said, is that “I think she was a particularly bad Health Secretary for Pennsylvania and needlessly sent thousands of elderly people back into nursing homes to die of COVID, like Cuomo did in New York.” (This parrots primarily right-wing Republican accusations against Levine, which Newsweek has debunked.)

When asked what this had to do with her being transgender, the former SA Idols judge admitted “zero”. He did not offer any clear explanation as to why he posted a meme that belittles Levine for her weight and gender identity rather than for her real or perceived failings as health secretary.

“How she chooses to identify is entirely her business, and there is a well-known condition called gender dysphoria. There may be no relation at all,” said Cliff ambiguously and noncommittally about why he shared the post to his 109,000 Instagram followers.

MambaOnline put it to Cliff that purposefully misgendering a transgender person and painting them as mentally ill due to being transgender perpetuates and legitimises a culture of ridicule, stigma, abuse, discrimination and violence against transgender people.

He responded: “I support anyone’s right to identify in any way they like. Misgendering isn’t an offence and I am always happy to identify anyone by their preferred pronouns, in person. I would never endorse the mistreatment, abuse or any violence against of any person, nor in this question, a transgender person.”

Cliff also cited an interview he did with Anastasia Tomson, a transgender South African doctor and author, presumably to confirm his trans-affirming credentials. However, no regret or apology for the Levine post was forthcoming.

As for posting the meme on the Transgender Day of Visibility, Cliff insisted it was pure coincidence. “I had no idea it was a special day,” he said. “Thank you for letting me know. Perhaps next year we’ll do a show on Cliffcentral.com to help spread the word.”

Tomson told MambaOnline that she was “devastated” by Cliff’s actions. “There is a line between individual satire, where members of the media poke fun at or criticise public figures, and making comments that are damaging to an entire community,” she said.

“Any narrative that suggests that a trans woman is ‘actually a man’ reinforces the harmful and toxic ideas that lead to trans women being murdered at a rate vastly out of proportion to that of the general population. It validates the inane notion that trans people should not be allowed in bathrooms congruent with their identity, and it spreads the fallacious and damaging idea that trans people are, in fact, predators.”

Tomson continued: “I can guarantee that while his Instagram story will likely never have an impact on Rachel Levine herself, it may very well play a role in inciting acts of violence, or even murder, against trans people who come from a far less privileged background and context than Rachel, myself, or Gareth.

“I would hope that Gareth’s interactions with both myself and other members of the LGBTQIA+ community would lead to a position of reflection, and a critical evaluation of the effect that comments like this have on the trans community.

“I know that Gareth is capable of better than this, and I do hope that he reflects on his comments, chooses to grow from them, makes amends to those he has hurt with this, and resolves to do better in future,” Tomson said.