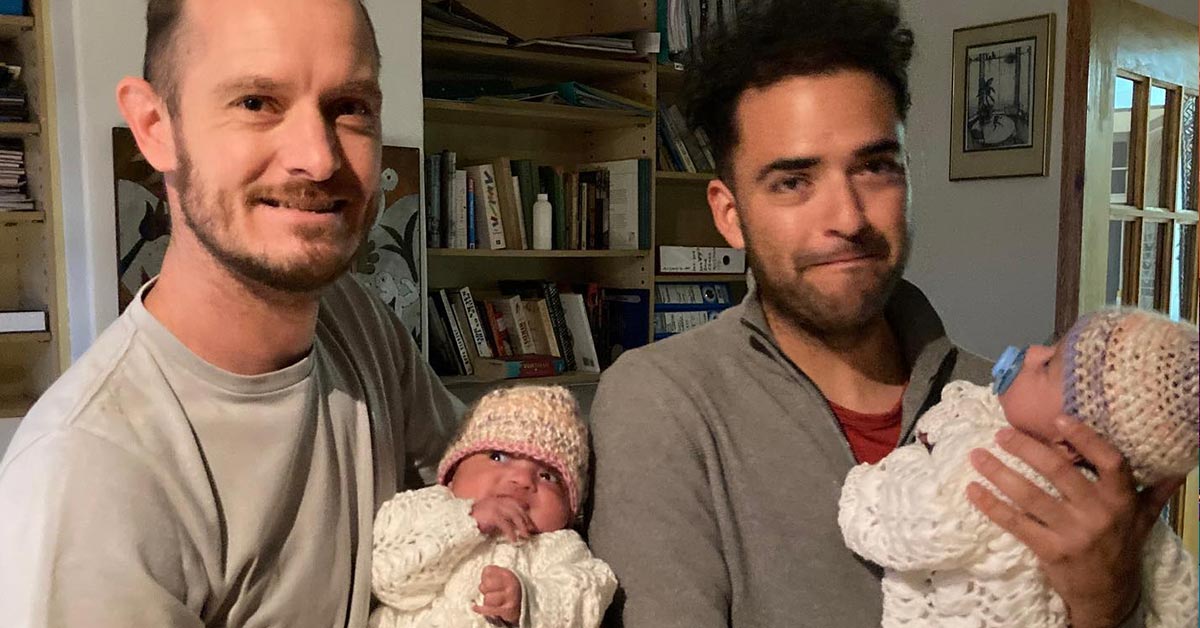 An emotional reunion: Phillip Lühl and Guillermo Delgado with their twins, Paula and Maya

The Namibian government has finally issued travel papers to two babies born to a gay couple, allowing the twins to go home to meet the rest of their family. But they’re not leaving just yet.

Paula and Maya were born on 13 March in Durban, South Africa through surrogacy. Phillip Lühl, who is Namibian, and his Mexican husband Guillermo Delgado are registered as their legal parents in South Africa.

Lühl and the girls were left stuck in South Africa after the Namibian government refused to recognise the family and to allow the babies to go home to Namibia to meet their other father and brother. Last month, the couple heartbreakingly lost their court case against the government.

On Tuesday, Lühl confirmed to MambaOnline that the Ministry of Home Affairs had done a U-turn and has now instructed the High Commission in Pretoria to issue emergency travel documents to Paula and Maya. He revealed, however, that the children would not be travelling to Namibia just yet.

“The High Commission can only issue travel documents that allow the twins to enter Namibia, but then they couldn’t exit [Namibia] again,” explained Lühl. “And so, we are seeking now a commitment by the ministry to also, once the twins are in Namibia, to issue them with a so-called ‘brown passport’.”

This temporary kind of passport can be issued to refugees (the girls are not recognised as Namibian at this point), allowing them to travel in and out of the country.

“So the fact that we now have travel documents for the girls is literally only one piece of the puzzle and the other pieces still have to fall into place,” said Lühl.

The family had an emotional reunion two weeks ago when Delgado travelled to South Africa from Namibia to join his husband and finally meet his daughters for the first time.

Delgado has remained in South Africa with the girls while Lühl has returned back to Namibia for the time being. The couple have a son, Yona, in Namibia, who is also not recognised as a Namibian citizen by the government.

While noting that the children remain stateless, Equal Namibia welcomed the news that the twins will be issued with travel documents. “No child should be discriminated against based on their parents status,” said the organisation in a statement. “Families belong together and are entitled to protection from society and the state.” It vowed to continue to fight the “government’s discriminatory stance.”

Lühl said it was unfortunate that it had taken so much energy and time for the Namibian government to grant the girls the right to travel home.

“It’s really quite sad that it takes so much emotional and financial [effort] and disruptions to our lives in order to get a simple bureaucratic decision taken that allows us to be together as a family,” he told MambaOnline.

The family are also embroiled in a separate legal bid to force the Namibian government – which does not recognise same-sex marriages – to give Delgado and Yona permanent residence.