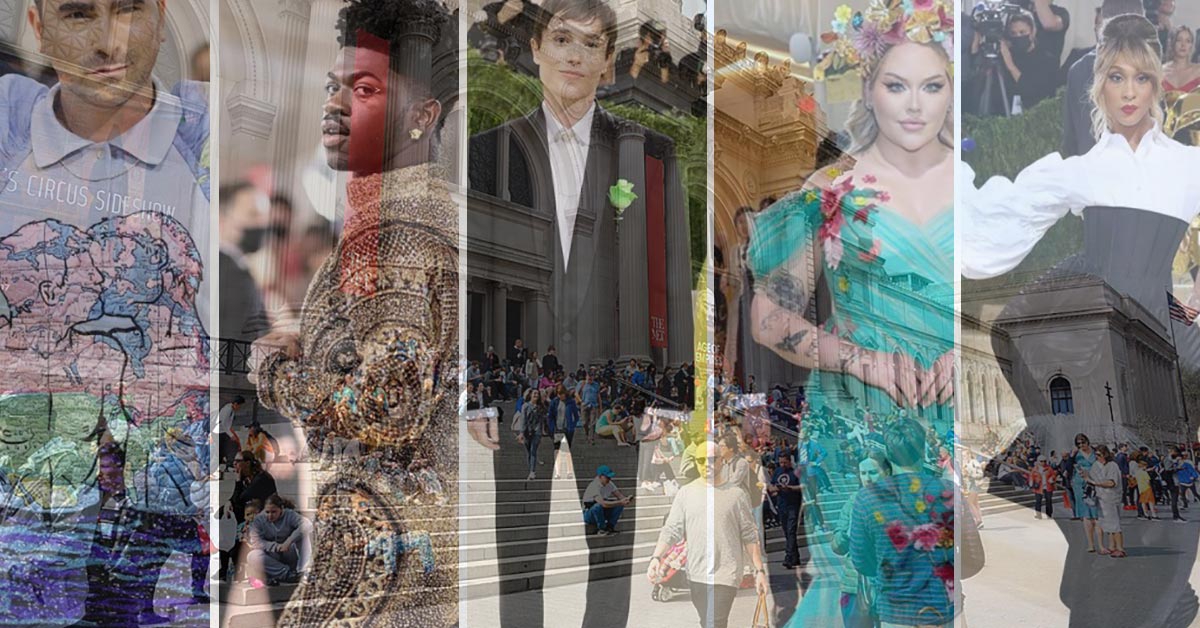 Queer celebs made a statement at the 2021 Met Gala

After a hiatus last year due to the outbreak of the pandemic, the Met Gala returned in all its spectacular and thought-provoking glory.

Fashion’s biggest night out was as glitzy as ever at this year’s Gala, with the event again serving as a fundraising benefit for the Metropolitan Museum of Art in New York City.

Needless to say, queer celebs served looks and social commentary, with a great many of the who’s who using their outfits to also convey a political message.

Here are some of our favourite looks of the event, which took place on 13 September.

Never scared of adding some spectacle to events, Lil Nas X opted for not one, but three red carpet looks. The artist, who also recently won the video of the year award for his banger Montero (Call Me By Your Name) at the VMAs, entered the occasion in an ornate golden cape, adorned with gold beading. The second part of his ensemble (which was custom-designed by Donatella Versace, no less) was a C-3PO-esque golden suit of armour, which was later taken off to reveal a golden body suit with crystal detail. Despite this being the rapper’s first appearance at the Met Gala, his outfit got top marks from fans and fashion critics alike.

The trans YouTuber, who is also known as Nikkie de Jager, looked breathtaking in a sea green floral gown and headdress, with a sash reading “PAY IT NO MIND” on the bottom part of the dress. The phrase is famously attributed to the late gay liberation activist and one of the most prominent members of the Stonewall riots, Marsha P Johnson. The phrase – which Johnson said the “P” in her name stood for – was often sarcastically used by the trans icon when she was questioned about her gender.

All that glitters is Keke Palmer

Keke Palmer co-hosted Vogue’ livestream coverage of the event, and the actress’s outfit had many jaws dropping. She was clad in a tight-fitting black floor-length gown with glitter detail by Sergio Hudson, and was compared to Diana Ross numerous times. Palmer came out as sexually fluid in 2015.

Cara Delevingne sticks it to the patriarchy

Pansexual model and actress Cara Delevingne sported a Dior-designed white bulletproof with a message for the patriarchy on the front. Not mincing her words, Delevingne advised anyone who doesn’t know what the message means to look it up, adding that it’s about gender equality and women empowerment.

A post shared by JUST A FAN PAGE! (@caradelevingne_world)

In his first appearance at the Met Gala, the Schitt’s Creek star stayed true to the evening’s theme, “In America: A Lexicon of Fashion” with a bold look featuring two men kissing, juxtaposed on a map of the USA. Levy expanded  about the significance of the outfit in the run-up to the Met Gala, also mentioning that it pays tribute to the late LGBTQI+ activist and multimedia artist, David Wojnarovicz.

Mj Rodriguez has something up her sleeve

The Pose star and Emmy nominee looked ravishing in a Victorian-inspired ensemble, with Rodriguez describing it as “beautiful oil spill, slash edgy Victorian look”. The outfit was designed by Thom Browne. Sky-high platforms complete the look – a well thought out decision, as the actress “wanted people to see that I feel like a statue”.

In his first red-carpet appearance since coming out as trans last year, Elliot Page looked dapper in a black Balenciaga tuxedo. In a nod to the LGBTQI+ community, Page pinned a green carnation to his lapel – this flower, the use of which was popularised by Oscar Wilde – has been a symbol of queer love since the late 1800s.