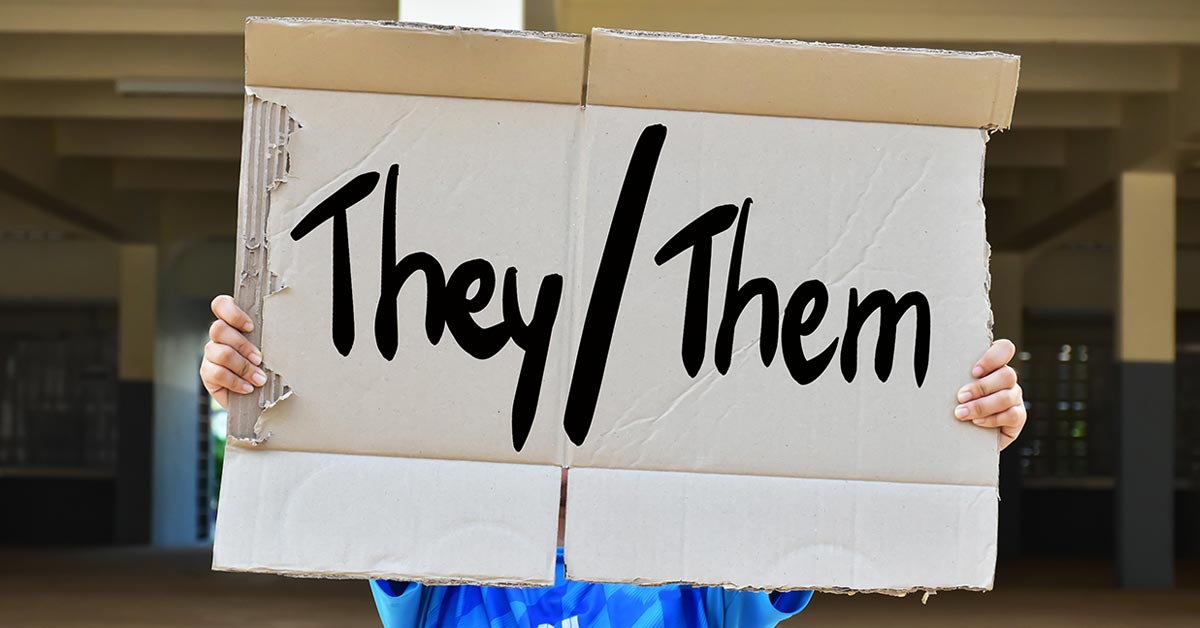 Gender pronouns are the terms people choose to refer to themselves that reflect their gender identity. These might be he/him, she/her or gender-neutral pronouns such as they/them.

The difference between sex and gender

While people may use the terms sex and gender interchangeably, they mean different things.

Sex refers to the physical differences between people who are female, male, or intersex. A person typically has their sex assigned at birth based on physiological characteristics, including their genitalia and chromosome composition.

This is distinct from gender, which is a social construct and reflects the social and cultural role of sex within a given community. People often develop their gender identity and gender expression in response to their environment.

While gender has been defined as binary in Western culture, gender is on a broad spectrum; a person may identify at any point within this spectrum or outside of it entirely. Gender is not neatly divided along the binary lines of “man” and “woman”.

People may identify with genders that are different from sex assigned at birth, some people do not identify with any gender, while others identify with multiple genders. These identities may include transgender, nonbinary, or gender-neutral.

Only the person themself can determine what their gender identity is, and this can change over time.

People who identify outside of a gender binary most often use non-gendered or nonbinary pronouns that are not gender specific. These include they/them/their used in the singular, ze (pronounced “zee”) in place of she/he, and hir (pronounced “here”) in place of his/him/her.

Everyone has the right to use the gender pronouns that match their personal identity. These pronouns may or may not match their gender expression, such as how the person dresses, looks, behaves or what their name is.

Why the right pronouns matter

Being misgendered and/or misnamed may leave the person feeling disrespected, invalidated and dismissed. This can be distressing and threaten the person’s mental health.

Transgender and non binary people are twice as likely to have suicidal thoughts than the general population, and are up to four times as likely to engage in risky substance use.

Studies have found that when compared with peers who could not use their chosen name and pronoun, young people who could experienced 71% fewer symptoms of severe depression, a 34% decrease in reported thoughts of suicide and a 65% decrease in suicide attempts.

Transgender youth who can use their chosen name are less likely to attempt suicide, per study https://t.co/7pdjZ3xenc pic.twitter.com/xisvMwnOnX

7 tips for getting pronouns right

The following tips might help you better understand gender pronouns and how you can affirm someone’s gender identity:

You can’t always know what someone’s gender pronouns are by looking at them, by their name, or by how they dress or behave.

Asking about and correctly using someone’s gender pronouns is an easy way to show your respect for their identity. Ask a person respectfully and privately what pronoun they use. A simple “Can I ask what pronoun you use?” will usually suffice.

4. Apologise if you call someone by the wrong pronoun

Mistakes happen and it can be difficult to adjust to using someone’s correct pronouns. If you accidentally misgender someone, apologise and continue the conversation using the correct pronoun.

Avoid addressing groups as “ladies and gentleman” or “boys and girls” and address groups of people as “everyone”, “colleagues”, “friends” or “students”. Employers should use gender-neutral language in formal and informal communications.

If you’ve not used gender-neutral pronouns such as “they” and “ze” before, give yourself time to practise and get used to them.

This is article is by Glen Hosking, Senior Lecturer in Psychology. Clinical Psychologist, Victoria University. It is republished from The Conversation under a Creative Commons license. Read the original article.