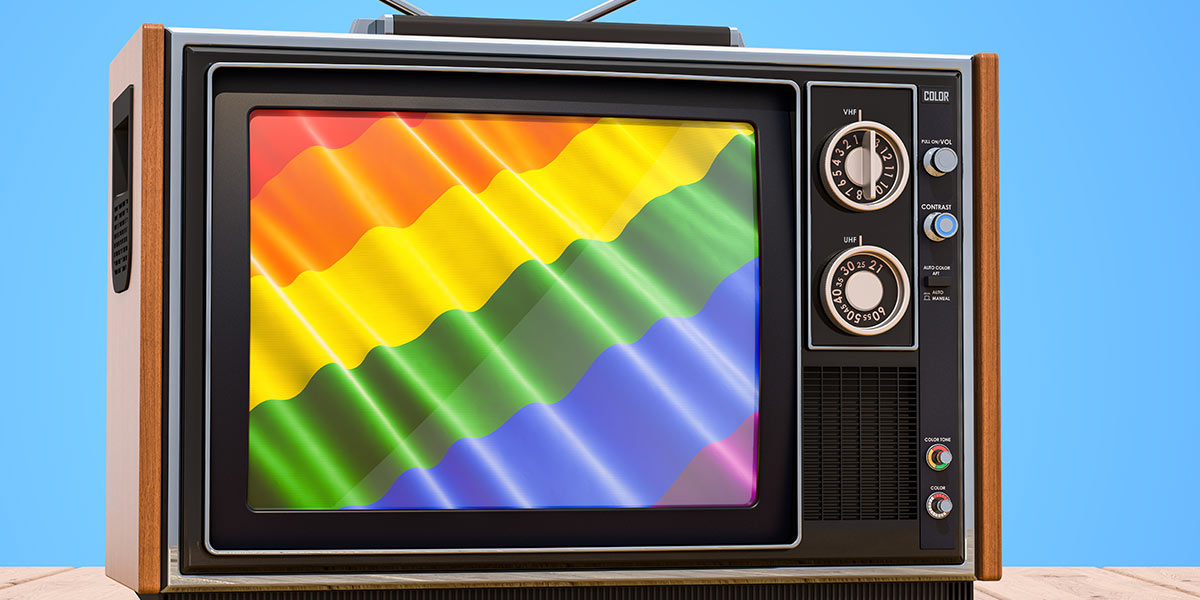 As South Africa marks Pride Month, local streaming service Showmax has highlighted 12 LGBTQIA+ shows and movies now on its platform that are worth watching – with Pride.

From lesbian superheroes to a gay coming-of-age horror, there’s a great selection to keep you engaged in the coming days.

The first season was up for a 2020 Queerty for Best TV Series and a 2020 GLAAD Media Award, with an 81% critics rating on Rotten Tomatoes, where the critics consensus says Generation Q “has style and charm to spare and announces a new phase for The L Word that will please new and old fans alike.” Slate calls it “a glossy, bighearted show that’s less soapy than the original series but delivers enough secrets, sex, and secret sex to keep the stakes high.”

Chucky S1 picks up after the events of the seventh film in the cult horror franchise, Cult of Chucky. Child star Zackary Arthur (Transparent, Kidding) makes his franchise debut as Jake Wheeler, a quiet gay kid who buys a vintage Chucky doll at a suburban yard sale, throwing an idyllic American town into chaos as a series of horrifying murders begins to expose the town’s hypocrisies and secrets.

Arthur is surrounded by Chucky veterans, from franchise creator Don Mancini (Hannibal) as the series showrunner to the likes of Oscar nominee Brad Dourif (The Lord of the Rings’ Wormtongue and One Flew Over the Cuckoo’s Nest’s Billy Bibbit) as Chucky; his daughter Fiona Dourif (Dirk Gently’s Holistic Detective Agency) as Nica; and Oscar nominee Jennifer Tilly (Bound) as Tiffany, not to mention Alex Vincent and Christine Elise as Chucky’s arch-nemesis Andy Barclay and his foster sister Kyle respectively.

Slant calls Chucky S1 “a gruesome, surprisingly insightful coming-of-age story,” while AVClub says, “Chucky is as foul-mouthed and homicidal as ever… Mancini and Dourif have been doing this for so long, they seem to have nailed down an understanding of what makes Chucky fun.”

Looking star Murray Bartlett is an early favourite for 2022’s Best Actor Emmy for his career-best role in The White Lotus as Armand, the hotel manager at an exclusive Hawaiian resort.

Set over the course of a week, the biting six-part HBO series gradually peels back the glossy veneer of picture-perfect travellers, cheerful hotel employees, and the idyllic locale itself to reveal something far uglier beneath.​

The White Lotus has an 88% critics rating on Rotten Tomatoes, with Time billing it as “the must-see show of the summer… a darkly hilarious, existentially terrifying wealth satire” and The Guardian as “2021’s best, and most uncomfortable, show.”

In Umakoti Wethu, SAFTA and Africa Movie Academy Award Best Actress winner Fulu Mugovhani gives another prize-worthy performance as Khathu, a Venda woman struggling to conceive, who finds herself in crisis when her Zulu husband’s new job takes them back to KwaZulu-Natal, his overbearing mother, and his old flame.

Beyond Black Productions executive producer Moeketsi Moeketsi says Umakoti Wethu is an attempt to “pay homage to a beautiful part of the isiZulu culture while in the same breath giving voice to those individuals that may not always be heard within that same culture.”

In the second season of the superhero drama Batwoman, actress Javicia Leslie makes history as the first black actress to play Batwoman in a live-action series, following Ruby Rose’s (rather controversial) exit.

Apart from also being a lesbian, Javicia’s Ryan Wilder is nothing like Kate Kane, bringing a whole new feel to the series. Athletic, raw, passionate, fallible and even goofy, Ryan is not your stereotypical all-American hero, but she could be exactly what Gotham needs…

Nominated for a 2021 Saturn Award for Best Superhero Adaptation, Batwoman also picked up nominations at the 2020 GLAAD Media Awards and the Queerties. Season 2 has an 89% critics rating on Rotten Tomatoes, where the critics consensus says it maintains “the show’s excellence while giving Javicia Leslie plenty of room to spread her wings.”

The #2 show on Rotten Tomatoes’ Best TV of 2021 (So Far), Hacks centres on legendary Las Vegas comedian Deborah Vance, who takes on an entitled, down-on-her-luck Gen Z comedy writer in a bid to find fresh material and remain relevant as her performance dates start to dwindle.

Hacks was up for 15 Emmys this year, including Outstanding Comedy Series, with Jean Smart (Watchmen) taking home her fourth Emmy as Deborah and co-creator Luca Aniello winning Outstanding Director and sharing the Writing Emmy with Paul W. Downs and Jen Statsky. This was just the fifth time a woman had won the Comedy: Directing category at the Emmys. Newcomer Hannah Einbinder and Carl Clemons-Hopkins (Candyman) were both nominated in the Outstanding Supporting Actress/Actor categories, while Golden Globe nominee Jane Adams (Hung) was nominated for an Emmy for Outstanding Guest Actress. Hacks was also named Best TV Comedy and Jean Smart Best TV Performance by GALECA: the society of LGBTQ Entertainment Critics.

Already renewed for a second season, Hacks has a 100% critics rating on Rotten Tomatoes, where the critics consensus says, “A prickling debut that pulls few punches, Hacks deftly balances its sharp critiques of the comedy world with more intimate moments, all the while giving the incomparable Jean Smart a role worthy of her talents – and an excellent partner in Hannah Einbinder.”

“Made with great panache, this is a real gem of understated poignancy… about summers as lovely as they are fraught,” says Globe and Mail, while Empire Magazine says, “Arterton triumphs again and Swale marks herself as a director to watch. Summerland successfully combines an intelligent feminist fable and a lesbian love story with a slick period tearjerker.”

Nominated for four Teen Choice awards, a People’s Choice award and the 2021 Critics’ Choice Super Award for Best Superhero Series, DC’s Legends of Tomorrow returns to the show’s sci-fi roots in Season 6 when Sara Lance (Caity Lotz), aka White Canary, is abducted by time-travelling aliens – just before she wants to propose to Ava Sharpe (Jes Macallan from Mistresses).

The series has an 89% critics score on Rotten Tomatoes, with Season 6 finally cracking that elusive 100% score. AV Club praises it as a “marvellous, irreverent, stupid-like-a-fox show,” with “oh-thank-god-let’s-have-some-dumb-fun energy,” and says, “Punch aliens! Roll your eyes at Spartacus! Drink a cocoon! Talk about John Constantine’s ass! Do whatever you want, Legends — we’re just glad to see you.”

Calling all Steven Universe fans – Cartoon Network’s 20-episode epilogue to the beloved original series zooms in on life in the aftermath of the events of Steven Universe and Steven Universe: The Movie. Humans and Gems coexist in harmony at last, after the end of the war between the Crystal Gems and Homeworld… but, at 16 – and with no more enemies to defeat – our love-everyone, make-friends-with-everyone, heal-everyone hero must see if he can make that Steven Universe awesomeness work for himself.

As Polygon puts it, “Instead of endlessly cycling through more and more enemies, the show’s wrap-up is doing something strange and amazing: it’s reminding viewers that what happens after a fight may be just as important to the participants as what happens during it.”

Sticking with the award-winning legacy of the franchise, Steven Universe Future was nominated for the 2020 Primetime Emmy Award for Short Form Animated Program and has been widely acclaimed by critics and fans alike. It has a 100% critics rating on Rotten Tomatoes, with Salon.com saying, “A cartoon that’s a rallying cry to love yourself and grow into your identity should be nothing radical for children… Steven Universe envisions a world where queerness is extraordinary as it is normal.”

The dearly missed Michael Kenneth Williams (The Wire) was nominated for an Emmy as Montrose in Lovecraft Country, nominated for Best TV Drama by GALECA: the society of LGBTQ Entertainment Critics. When Courtney B. Vance won the Emmy for Guest Actor as Uncle George, he used the opportunity to sing Williams’ praises. Vance credited Lovecraft Country creator Misha Green for saying it best: “Michael did everything with his full heart open, with his infinite spirit and with way too much style. May he rest in power and let us all honour his immense legacy by being a little more love-forward, a little more endless in thought, a little bit more swaggy in act.”

In the 1950s, Atticus (Emmy nominee Jonathan Majors) sets out on a road trip with his friend (Emmy nominee Jurnee Smollet) and uncle to find Montrose, his missing father. This catapults the three into a struggle for survival against the dual terrors of Jim Crow-era America and terrifying monsters that could be ripped from a paperback written by pulpy horror author HP Lovecraft.

Lovecraft Country has an 88% critics rating on Rotten Tomatoes, their best-reviewed sci-fi/fantasy series of 2020. As Newsday put it, “To call Lovecraft Country ‘wildly original’ seems almost a quaint understatement. But it is wild. And original. Little doubt about that.”

The three leads have all been nominated for Teen Choice awards for their roles, with the show nominated three times as Teen Choice Summer TV Show.

In the girl buddy road trip comedy drama Unpregnant, 17-year old Veronica’s dreams for the future hang in the balance after she accidentally falls pregnant. Unable to get an abortion in her home state of Missouri, she turns to her former best friend Bailey to help her get to Albuquerque.

Nominated for a 2021 GLAAD Media Award and a Gold Derby Award for Outstanding TV Movie, Unpregnant has a 91% critics rating on Rotten Tomatoes, where the critics consensus says, “Unpregnant puts a compelling twist on the road trip comedy – and treats its sensitive subject with heart.”

These represent just a sample of the LGBTIAQ+ titles on Showmax. There also We’re Here, winner of the 2021 GLAAD Media Award for Outstanding Reality Program; 2021 GLAAD nominees like Superstore; 2021 Queerties nominees like P-Valley, Hightown and Bully. Coward. Victim. The Story of Roy Cohn; 2021 BAFTA nominee Moffie; and 2021 Emmy winner I May Destroy You.