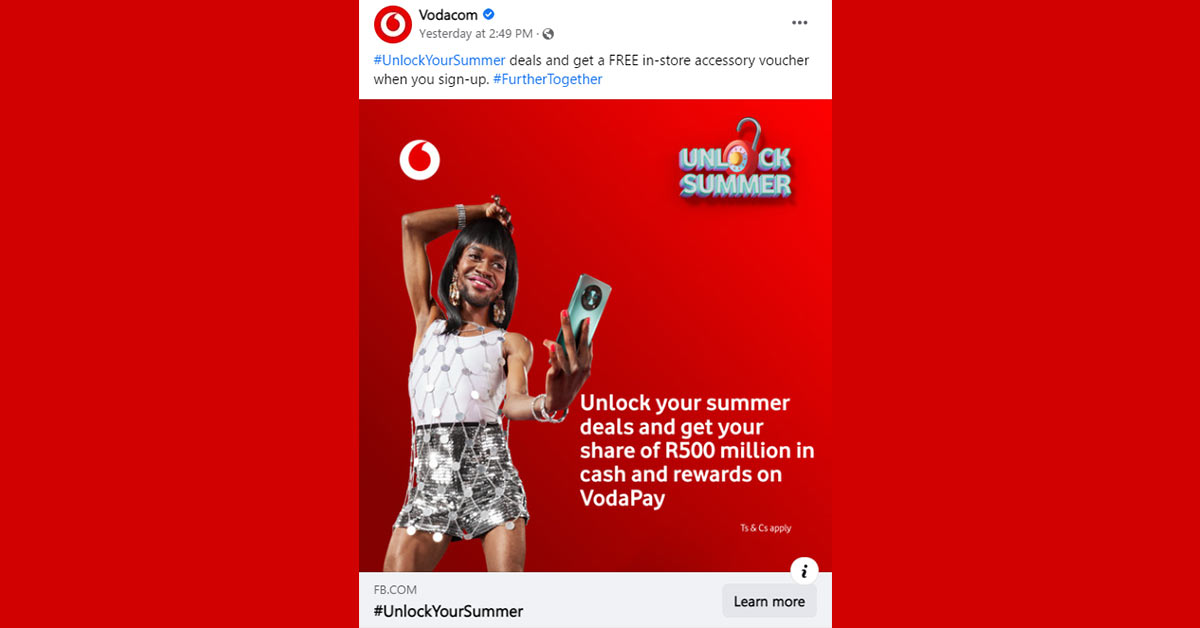 An online advert for Vodacom featuring a queer-presenting model has seen hundreds responding with shocking vitriol and hatred.

The Facebook ad was posted on Wednesday to promote the mobile operator’s #UnlockYourSummer specials. The campaign features a range of diverse models and the ad in question shows a transgender or gender non-conforming individual appearing to take a selfie.

Within minutes, people began commenting on the ad; the vast majority attacking the model and LGBTQIA+ visibility in general. Without any shame or fear, hundreds more went on to spew queerphobic – particularly transphobic – slurs and jibes.

Many slammed Vodacom for its so-called “woke” agenda and accused it of “encouraging people to be gay” and “pushing the trans agenda”. Some were so outraged and offended that they threatened to stop doing business with the company.

“WTF! Goodbye Vodacom!! Will be cancelling my phone contract and fibre and moving to providers that doesn’t encourage this madness!” wrote one person.

“What did my eyes see!” exclaimed another, with others stating that “This is kinda disgusting!!!” and that “that picture is against my relationship with God.”

There were many more, with Vodacom deleting the most heinous and extreme examples of hate speech which we have also chosen not to repeat.

“We are pleased to represent the LGBTQIA+ community in our campaigns and creative work and will continue to do so.” Vodacom

A Vodacom spokesperson told MambaOnline that “As a purpose-led brand that focuses on using technology to connect for a better future, we acknowledge the human spirit in all of our customers. This includes various communities which unite us in our diversity.”

“This is in line with our Equality, Diversity and Inclusion (EDI) policy as a company and is reflected in our advertising as we continue to embrace diversity and remain committed to inclusion.”

The spokesperson said that “we will delete all comments on our platforms that are deemed as hate speech” as “we have a responsibility to uphold the constitution of the country, which prohibits the advocacy of hatred based on race, ethnicity, gender or religion.”

When asked if the negativity towards the ad will affect Vodacom’s queer representation in future advertising, the spokesperson responded that the company has no plans to back down, explaining that “we are pleased to represent the LGBTQIA+ community in our campaigns and creative work and will continue to do so.”

The company, which recently hosted a #PrideAtWork roundtable discussion, also referred us to its inclusion initiatives.

The appalling reaction to the Vodacom advert is a disconcerting and depressing reminder of the hatred facing LGBTQIA+ South Africans and the pushback against corporate allyship. While we are quick to accuse companies of “pink-washing” it’s also important to acknowledge and support the progress that is being made.