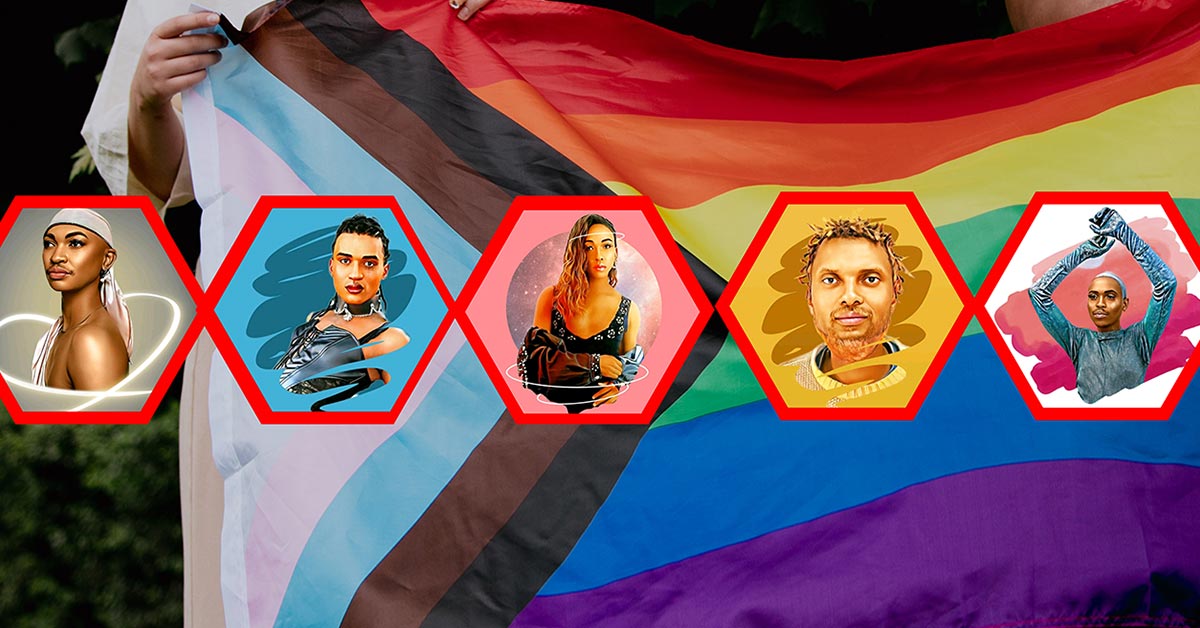 It’s been 32 years since South Africa’s first pride march celebrated LGBTQ+ identity. To mark this milestone, Future Kwaai Records and 1Beat have brought together some of SA’s most exciting queer artists – Gyre, Mx Blouse, Mr Allofit and Hlasko – for a collaborative EP unpacking the theme of freedom.

Nkululeko, which means freedom in Zulu, features six original tracks made by these queer music artists and highlights queer struggles, love, the fight for freedom, and community.

“The lack of opportunities, spaces to gather, and creative inspiration saw suicide rates going up on top of the increasing death and violence against our community. Nkululeko is a body of work that speaks to the idea of healing, freedom, and upliftment within our community,” she explains.

”This project came from the need to take up space and highlight our stories, music, creativity, and points of view to create a bridge of understanding in our society so that the future can look brighter for all of us.”

“The manifestation of my career is as of a result of freedom. When I began rapping, I grappled with the idea of identifying as an openly queer rapper. This was especially challenging, cause at the time, I didn’t know of any other in the industry. But I chose to operate from a place of authenticity and that can only exist when one is free enough to be themselves without inhibitions,” says Gyre.

Each artist contributed a song that speaks to the theme of freedom, creating a blend of sounds ranging from psychedelic pop, queer rap, afro-rave, avant-garde electro, and kwaito.

Musician, stylist to the stars, and avant-garde designer, Mr Allofit says: “Freedom for me is the equivalent of ‘NO FEAR’ – Limitless and boundless existence!”

The project will be officially performed at the inaugural Legrand Queer Arts Festival in February 2023, where each artist will perform a set of their most iconic songs.

Together with Legrand Queer Arts Festival, some of the proceeds from the project will go towards local LGBTQ+ organisations making a difference in queer issues, housing and healthcare.

Get to know the artists

Umlilo
Intergalactic shape-shifting kwaai diva of the universe, Umlilo is a genre and gender-bending multi-disciplinary artist in music production, fashion, 3D animation, VR, visual art, and performance. She is a trans artivist with two acclaimed EPs that have been playlisted and performed around the world. Umlilo has collaborated with institutions like OneBeat USA, Prohelvetia Switzerland, Goethe Germany, Rosa Luxemburg (Germany), Explode Brazil, and Electric South. She is the founder of Future Kwaai Records and Chakra Huns Podcast on Other Radio. Her signature sound is dubbed ‘future kwaai’ and explores and pushes the boundaries of electronic sounds.

Gyre
Gyre is a South African queer music artist pushing the boundaries of rap and hip-hop. His debut album Queernomics explored queer bodies with sultry trap anthems like Eat My Ass. He has toured Switzerland as part of the Shap Shap tour with Moonchild Sannely and is currently in production for a vogue musical about queer icon Simon Nkoli. He was also featured in Desire Marea’s Studies in Black Trauma. He is also an entertainment, queer rights, and sports journalist.

Mr Allofit
Mr Allofit is a rapper, musician, choreographer, designer, and stylist to the stars with his fashion line CustomMrAllofit. Mr Allofit has released several acclaimed EPs. His single UberX was number 1 and Activate was number 2 on the 5FM local charts. He has collaborated with celebrities like Sho Madjozi, Moozli, and Bongani Fassie to name a few. Mr Allofit is no stranger to local television having appeared on shows like SABC’s Trending SA, YOTV, ETV, and many more.

Mx Blouse
Mx Blouse is a genre-defying, gender-non-conforming rapper and artist who is considered one of the vanguards of SA’s creative music culture. The journalist, lyricist, and performer has been at the forefront of queer music in the past years with acclaimed EPs, singles and music videos. Mx Blouse combines a variety of musical influences — including R&B, hip-hop, Kwaito, rock, and house.

Hlasko
Hlasko is an ethereal electronic songstress, producer and queer music artist who has been playlisted all over the world. They have collaborated with artists like Nonku Phiri, Jumping Backslash, and German producer Akrobat. Hlasko’s music fuses a range of influences within the experimental music realm. His voice and sounds produce an exciting mix of afro-future electro and avant-garde experimental music.