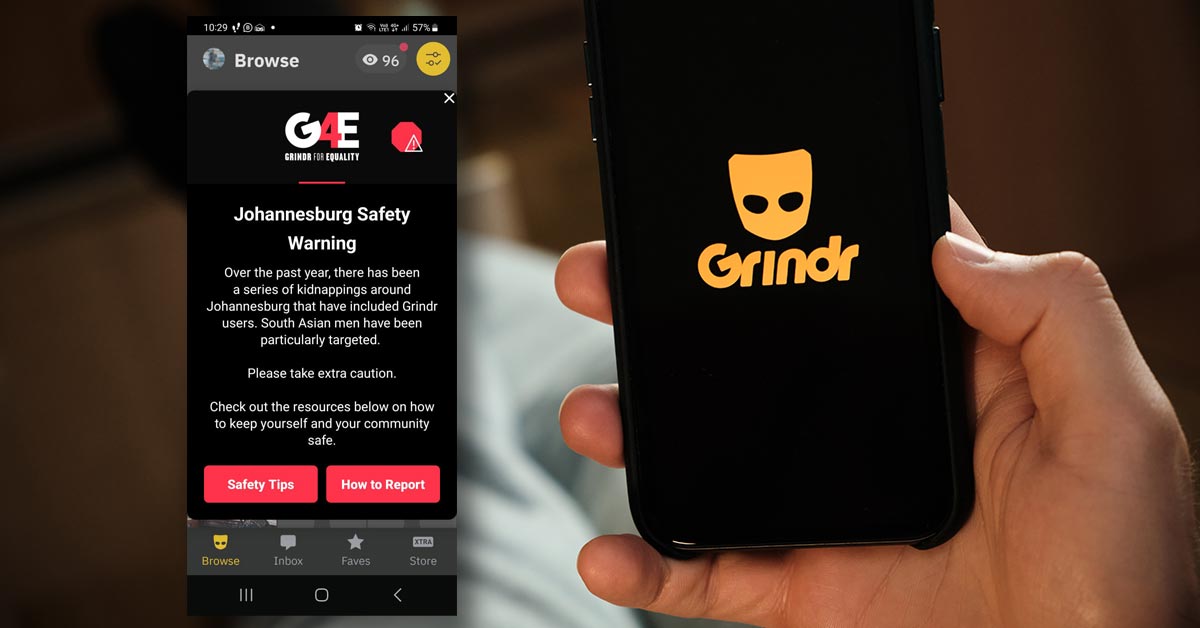 For several years, numerous queer men in Gauteng have become victims of criminals who lure them via dating apps like Grindr and then proceed to hold them captive and rob them. There has been a significant spike in these cases over the last year or so and these criminals appear to operate unfettered without any consequence. Hendrik, a Johannesburg man, was a recent victim. Here he tells us about his experience with the so-called Grindr Gang.

When I open Grindr, there is a message that pops up. It warns of a gang operating in Johannesburg that is extorting money from especially South Asian gay men. Last year, a friend of mine was taken hostage by this Grindr Gang. He was held for 14 hours and they bought alcohol worth almost R50,000 using his bank cards. Never did I think I would fall for the same scam.

I think of myself as being Grindr savvy, so how stupid do you think I felt a few weeks ago when I went to meet someone at their house only to end up tied up by four men, who proceeded to e-Wallet a substantial amount of money out of my bank account?

It was a Friday morning. I was feeling frisky. I struck up a conversation with a guy on Grindr. He very quickly wanted to move the conversation to WhatsApp. We arranged to meet at his house in Riverside in the Fourways area. I wanted to pass by the shops anyway, so thought I would stop by for a few minutes and have some fun.

I found the place easily enough and got a WhatsApp message to park inside the garage. As I drove in, two guys emerged, closing the roller door behind me. This was unexpected. My heart beat a little bit faster as I assessed the situation.

I introduced myself and was invited inside, where I saw some empty booze bottles on the table. I asked whether they had a party and they said yes. One guy started making sexual advances to me.

He deftly guided me into the bedroom and out of my clothes, and within seconds the second guy came in and started tying my feet together while the first guy put me in a chokehold. I tried to struggle, but two more guys came in and soon my hands, knees, and ankles were tied up, using the laces from my shoes.

I was dumbfounded by the speed and efficiency of what had just happened. It all happened so smoothly, I hardly had time to think it through – from the moment we met on Grindr to me being helpless and naked here on a bed, surrounded by four threatening men. This gang knows exactly what they’re doing, as they have obviously done this many times before.

I was tied up for four hours and my phone used to get as much money as possible out of my account. When there wasn’t enough for them, I had to phone my son to ask him to transfer more. They also emptied a work card to buy alcohol.

“During the four hours I was held, they were constantly on Grindr, WhatsApp, and taking calls from other potential victims.”

Luckily, I wasn’t hurt. I did speak to them during the ordeal and managed to piece together something about their modus operandi. I hope that by sharing this it will help someone to recognise the scam and perhaps lead to the arrest and conviction of the members of this gang.

It seems that they usually do the following:

They rent a “guest house”, which is not a guest house in the traditional sense of the word, where there are staff and hosts around. These houses are rented for the night, with them booking in probably at around 14h00, and vacating it the next day at 13h00.

Once booked in, the party starts, as does the work to get a victim. During the four hours I was held, they were constantly on Grindr, WhatsApp, and taking calls from other potential victims. I overheard a call put on speakerphone with a young South Asian crossdresser who revealed a lot about themself in the five-minute call. They must have many leads which they try to convert into victims every day.

Once someone arrives, they jump into action to tie him up. Then the party continues, as they drain bank accounts until it’s time for them to move on the next day. They order a car and, when it arrives, leave you tied up to find your own way out.

In my case, there were four guys, but perhaps the number changes, as I have heard someone say the gang that kept him captive had five. I do suspect that it’s the same core group time and again. Two of the guys are a little chubby and the other two are darker-skinned, older, and look more hardened.

The gang’s main aim is to get into your bank account through your phone. For this, they need a fingerprint (if your biometrics are set up on your phone), or they will threaten violence to get your PIN.

Money in your account will be sent via e-Wallet to your phone number. One of the guys will go to a shopping centre close by to draw it, from where it is shared between them. From what I could gather, they have a minimum that they want to get, and in my case, they weren’t very happy with the end result but their time ran out and so I came off rather lightly. In total, they took R13,000 and my cell phone.

They told me they aren’t into stealing victims’ cars unless it’s a new car. They did ask whether I had access to weapons, which I do not. It might be that they could sell weapons for cash. I didn’t see any weapons while I was tied up, but was threatened with being stabbed with a knife and burned with an electric iron.

These guys were mainly after cash and booze and from what I could see, their little “cash business” was doing extremely well.

From the questions they asked me, it was clear that they were looking for ways to blackmail me. If I was still in the closet or married, they would have had added ways to put me under pressure, but everybody knows I’m gay, so there was nothing for them to explore there. I suspect if you’re a young closeted queer whose family doesn’t even know that you’re gay, never mind cross-dressing, you are going to pay dearly for that when in the clutches of this gang.

This gang has been doing the rounds for a while now and the chances of them becoming complacent in their routine might be their downfall. They might end up staying in the same guest houses regularly and use the same ATM machines at the shopping centres close by.

I have questioned myself why I did not spot the warning signs. Perhaps I did but chose to ignore them, as my thinking wasn’t done with the right head.

“Listen to your subconscious and, when something feels off, trust that instinct…”

Here are a few things to think about in the way you use Grindr:

Some advice I have heard is that one needs to go on a date first, but let’s face it, sometimes you just want to hook up.

There is no one thing you can do to avoid getting caught by these guys, but you can lean into your previous experience and be more discerning. Always listen to your subconscious and, when something feels off, trust that instinct. I didn’t, instead, I scoffed at it, only to now regret not trusting my gut.

If somebody does go through this, please go to the police and get a case number. There are quite a few cases and perhaps we can put all of them together and get a detective to really investigate this and find this gang.

Please be safe. Take extra precautions. Falling into the hands of the Grindr Gang will cost you dearly.

What you can do:

Hendrik also spoke about his ordeal on The Martin Bester Show on Jacaranda FM. You can listen to the podcast recording here.