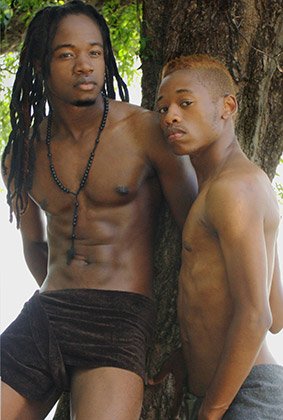 On a continent where homosexuality is often seen as foreign and unnatural Tshepo Cameron Modisane and Thoba Calvin Sithole are loudly proclaiming their love for each other. Meet this proudly gay and engaged-to-marry couple who’re determined to live and love freely.

The now 27-year-old men first met and became friends while studying in Durban but lost touch after Tshepo returned to Joburg. Thoba, who is originally from KZN, later moved to Gauteng in 2011.

They then bumped into each other at the Sunninghill Virgin Active gym, reigniting their friendship and becoming gym partners; supporting and motivating each other in their workouts. “We were helping each other with weights, training exercises and eating health plans,” explains Tshepo.

The chemistry between them grew and they soon realised that they were becoming much more than friends. “We finally made it official and were an item,” says Tshepo.

“The great step that we took in our relationship as a gay couple was introducing each other to our families. We are so blessed to have supportive families who care about us. Even though we are gay they still love us.”

The relationship strengthened and, one Friday evening at home in June last year, Tshepo proposed to Thoba. He accepted and the couple decided to do things the African way; respecting the traditions and customs associated with marriage.

With their families’ support, the couple have set the date of 6 April to have the African ceremony in Thoba’s hometown of Stanger. They expect over 200 guests and the guys will dress in their respective traditional clothing (Tshepo is Tswana and Thoba is Zulu).

“Since we are both men we have decided that neither of us will pay lobolo. The most that we will do is to buy gifts for our parents as a sign of appreciation for raising us,” says Thoba.

They plan to have their white wedding later in the year in Johannesburg as a more intimate ceremony and are determined to have children through a surrogate.

“Family is important to us and that is the number one reason why we want to have children. We also want our children to grow up in an environment where they are loved greatly by both parents who appreciate them,” says Thoba.

The relationship has become something of a cause cause célèbre in KZN, with a local newspaper celebrating their upcoming nuptials as the area’s first legal gay marriage with a front page feature.

Tshepo says that one of the reasons they’ve chosen to be so open is that they “hope to inspire people out there who are still struggling to come to terms with their sexuality”.

“We see no reason to hide in darkness as if there is something to be ashamed about. Our marriage is largely symbolic and a sign that black gay men can commit and build family through a happy and loving marriage,” he says.

Thoba chimes in that “This is who we are and we are just tired of people judging with no understanding. We are people and entitled to live life to the fullest”.

He adds that as a couple, “we have never felt any negative reaction that was blatant to our face. Most people have largely been supportive and excited about our union”.

They both agree, however, that there is a lack of openly gay role models in South Africa, especially among people of colour. “People are still ashamed because the vast majority of the black community is not accepting of being a homosexual. They see it as largely being a ‘Western trend’ that is in fashion lately,” says Tshepo.

He goes on to add that he has no problem being seen as a role model. “If our action of getting married and being bold and proud about it is emulated by more members of the LGBTI community who are black, then so be it. If people are inspired by our love and actions and want to do the same to follow in our footsteps then we don’t mind being labelled as ‘role models’ in the LGBTI community.”

Tshepo believes that “More and more members of this community who hold positions of influence need to come out so that people become aware that being a homosexual is not some disorder or curse from God”.

Thoba agrees: “Hiding who we are is what makes people judge us even more and makes them not accept us for who we are. If we can just live life openly then in time people will get used to the idea that gay and lesbian people are part of society and we are here to stay.”

They scoff at the widely held notion on the continent that being gay is un-African and somehow brought here by the West.

“We grew up in a township and homosexual people have always been around us even though they were ridiculed by members of the community,” says Tshepo, arguing that it’s discrimination, through colonial laws and attitudes, that was imported to Africa.

“Studies by historians and anthropologists have found same-sex relationships to have been in existence in pre-colonial Africa,” he argues. “Most Africans need to stop making excuses for their own fears and embrace that same-sex relations have been happening in Africa since time immemorial.”

They see Valentine’s Day as “a wonderful day for celebrating love” but also believe that “each and every day should be Valentine’s Day” between people who love each other. They’ll be marking the day this year by having a romantic dinner for two.

Romance is something that they say helps keep the spark alive in their relationship. “Tshepo is very romantic and not afraid to show his love,” says Thoba.

“I think one of the most romantic things that he has done for me was writing a poem that was dedicated to me which brought tears to my eyes as I knew that it came from the heart. It is the small simple things that matter to me the most.”

Tshepo says that what he most loves about Thoba is “his calm and humble spirit. I love the fact that he takes care of me. I love the fact that he is sexy and I can rely on him as a partner that will always be there for me. His love for me has no begining and no end. We share a common goal and vision about the kind of life and future we want to live in.”

When asked what he most loves about Tshepo, Thoba says that he adores the “fact that he is really smart and wise beyond his age. I love the fact that Tshepo is goal oriented and driven about the future. Not forgetting the fact that I find him extremely sexy – and his six pack stomach as well. Tshepo cares a lot about me. I have experienced his love and it genuinely comes from the heart.”

Tshepo and Thoba are part of a new generation of young gay Africans who are determined to claim an equal space in their communities. Through their actions, words and love for each other these two men express the common humanity we all share. They inspire us to hope and dream that in an ideal world love may indeed conquer all.