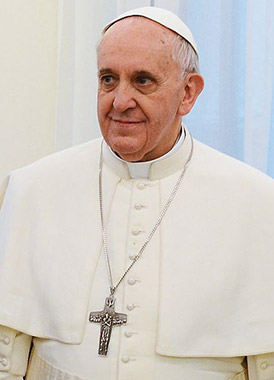 In what has been seen as a conciliatory move, Pope Francis has said that while homosexual acts may be sinful, gays and lesbians should not be discriminated against or marginalised.

During a discussion with journalists on a plane returning to the Vatican from his trip to Brazil, Francis said: “If a person is gay and seeks God and has good will, who am I to judge him?”

He went on to say: “The Catechism of the Catholic Church explains this very well. It says they should not be marginalised because of this (orientation) but that they must be integrated into society.”

The acceptance of homosexual people but not their sexual acts has been part of the Catholic dogma for some time, but it is unprecedented for a Pope to so publicly express his support for the wider acceptance of gay people.

Commenting about reports of a gay lobby in the Vatican, the Pontiff joked: “You see a lot written about the gay lobby. I still have not seen anyone in the Vatican with an identity card saying they are gay.”

The Pope did not show any signs of softening on the issue of gay marriage, however. The Catholic Church has actively campaigned against moves to legalise same-sex marriage in countries around the world.

The Church holds the position that homosexual acts are “acts of grave depravity,” describing them as “intrinsically disordered and “contrary to the natural law”.