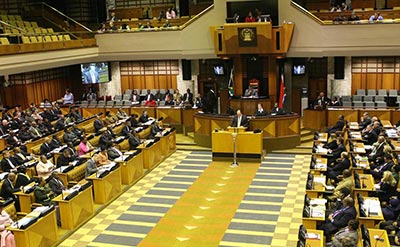 The DA says that the ANC blocked its motion in Parliament on Tuesday to condemn the Anti-Homosexuality Bill signed into law by Ugandan President, Yoweri Museveni on Monday.

According to Sandy Kalyan, DA Deputy Chief Whip, ANC MPs heckled her when she raised the issue in the House, “illustrating their brazen insensitivity if not support for this shocking measure.”

She said that the ANC in Parliament did not seek to propose any amendments to the motion but rejected it “in its entirety.”

“Our motion would have ensured that South Africa continues with the human rights-based foreign policy established by President Nelson Mandela and that we re-gain our moral standing in the international arena,” said Kalyan.

She also condemned the “shameful failure by President Zuma’s administration to act on this matter.”

The development came as the Department of International Relations and Cooperation (DIRCO) issued a weak statement that fell short of condemning the Ugandan law or a similar recently enacted Nigerian bill; continuing the government’s policy of “silent diplomacy” on LGBT issues.

It further stated: “The South African Government will, through existing diplomatic channels, be seeking clarification on these developments from many capitals around the world.

“South Africa views the respect for the promotion, protection and fulfilment of human rights and fundamental freedoms as a critical pillar of our domestic and foreign policies; hence they are enshrined in our Constitution.

“South Africa believes that no persons should be subjected to discrimination or violence on any ground, including on the basis of sexual orientation,” said DIRCO.

Referring to the statement, Kalyan accused the Minister of International Relations and Cooperation, Maite Nkoana-Mashabane, of failing “to act decisively on this issue.”

She stated: “We must indeed ask why it is that South Africa always resorts to silent diplomacy when it instead should be providing leadership on the continent. With our proud history of fighting injustice, and with one of the most progressive constitutions in the world, our government should have been first to publicly object to the barbaric laws of a state right on our doorstep.”

Kalyan added that, “The South African government, and the African Union, which is being chaired by, Dr. Nkosazana Dlamini-Zuma, must be urged to act to ensure that Uganda’s suppression of human rights does not go without censure.”

The ANC’s failure to condemn the anti-gay law in Parliament and DIRCO’s unimpressive statement on the matter is unlikely to silence critics who have slammed the government for not loudly commending the growing wave of anti-gay sentiment and laws on the continent.

In its recent World Report 2014, Human Rights Watch praised South Africa for introducing a precedent-setting 2011 resolution at the UN Human Rights Council on combating violence and discrimination against LGBT people, but noted that the country “has not played a decisive leadership role on this issue at the UN since then.”