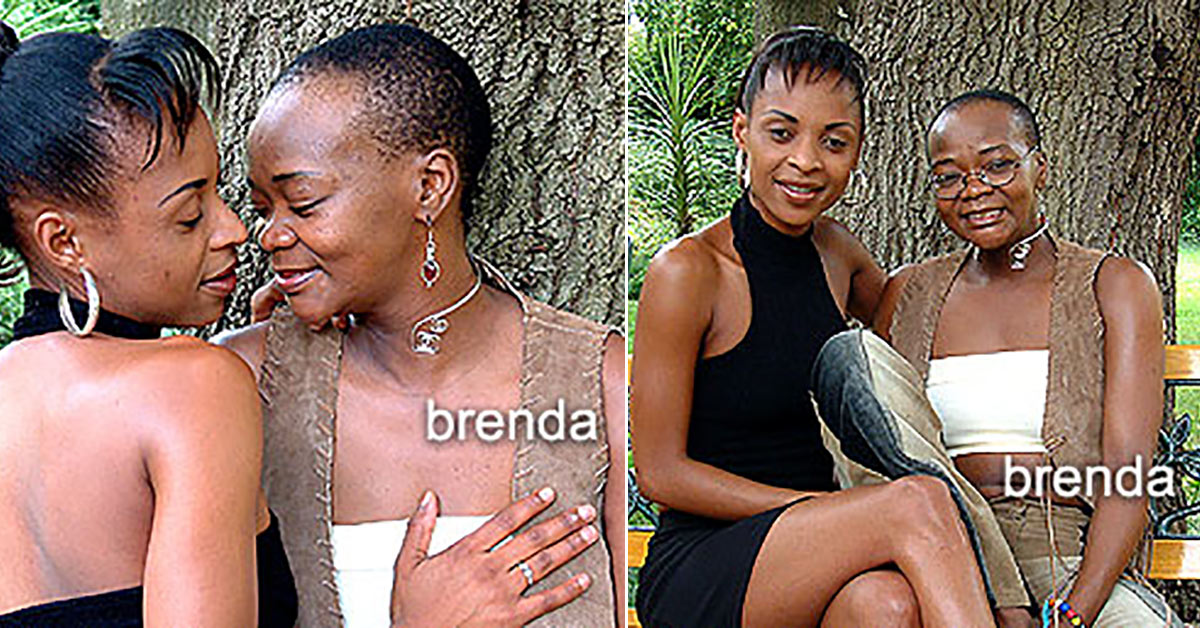 In 2004, South African music superstar and queer icon Brenda Fassie died tragically of a drug overdose at the age of 39. In memory of the late “Queen of African Pop,” we’re republishing our landmark 2003 interview with the singer, in which she spoke openly about her lesbian relationship and identity.

Since her 1983 solo debut entitled Weekend Special Brenda Fassie has been billed as one of Africa’s greatest voices and one of the continents biggest selling artists.

Media scandals involving drugs, rehab and a number of stormy relationships have done nothing to dim Brenda’s popularity. Her affairs with both men and women have also added a mystique to the star’s sexuality.

I admit that there was some trepidation in my meeting the hotheaded star renowned for her onstage catfights. My first attempt to interview Brenda was something of damp squib, although it hinted at Rock n Roll excesses.

I arrived at her hotel room in Sandton and was met by Brenda at the door in a towel looking thoroughly confused to see me. She’d had a late night out and wasn’t up to the interview. I suggested we reschedule and she seemed eager to do just that.

The second time round Brenda was expecting me, and after an hour wait (standard modus operandi when interviewing a star), I was again greeted at the door by Brenda herself, wearing a bandana and a tie-dyed T-shirt. It’s Valentine’s Day.

She leads me into the room where her partner Sindi is dozing au naturelle under the covers. Brenda picks up the phone and orders herself four bottles of Hunters Dry plus a can of Coke for Sindi (it’s eleven in the morning).

“I hate Valentines Day,” Brenda comments in her raspy voice, “It’s fake love. Every day is special. Do you have to confess your love? Why confess?” Still, she’s touched by the roses and bottle of brandy delivered by two men of international descent. Cracking open the bottle, she pours the first sip of brandy onto the ground for the ancestors and then slips down onto the couch next to me.

I explain what Mambaonline is all about, and who forms our primary target audience. “So you want to talk about me being a lesbian?” she smiles, before I’ve said another word. Brenda immediately confirms that she has chosen to give up on being with men. “It’s dangerous to be with men for me because they’ve hurt me,” she says,

“And with this disease that’s around it’s even better to be with my baby.” She turns and looks toward the bed, where Sindi is surfacing from her half-asleep state. “Hello,” Brenda smiles gently, and Sindi murmurs a comment in return.

“It just happened just like that,” Brenda continues as she turns back to me, explaining how she first discovered she was a lesbian. Because “lesbian” is how Brenda identifies herself. “I am, I’m a lover,” she confirms. I ask when she first realised she was a lesbian, adding that we’ll discuss it if she’s happy to talk about it. “She’s happy to talk about it,” Sindi comments from the bed, and Brenda smiles in agreement.

“I’ve always been a tomboy,” she begins, adding that during her formative years in Langa she didn’t have a concept of homosexuality. “I wasn’t aware of it then,” she says, “I was just a tomboy. In 1979 I came here [to Johannesburg] and then I thought I could be a lesbian.” I ask about the fact that she’s been involved with men in between her lesbian relationships. “I’ve always been with women,” she replies, “When I was still married I was also with women.”

She adds that people have always been aware of her sexuality and it’s never bothered her that it was public knowledge. “They knew. People knew,” she continues, “And a lot of people are into it now. They want to join in. They’ve started faking it.”

Sindi pitches in from under the bedclothes, seemingly clarifying Brenda’s statement that certain homosexual people are “faking it”. “People are adventurous nowadays,” Sindi says, “They want to experience it.”

But, Brenda goes on; her lesbian status has had no negative effects upon her career. “Before people thought it was a bad thing in God’s eyes,” she says, “But I became more interesting to people.” But Brenda has never cared what anybody thinks. “They don’t bother me,” she says strongly, “It’s nice to be the way I am.” She’s also never kept her sexuality a secret, in spite of what anyone might think about it. “It’s not a problem to be so,” she explains, “It’s my life. I think people should concentrate on my music.”

When I ask her to comment on the perception that homosexuality is “un-African”, Brenda simply says, “Time changes.” Sindi has more to say on the subject, however. “It doesn’t go with culture,” she adds, “According to African culture it’s not acceptable but according to nature it’s just nature.”

“I’ll have a proper marriage one day… We’ll get married.”

I bring up the subject of their wedding, and they refute the misconception in the media that the two were married in a public commitment ceremony. “We’re not married,” Brenda sets the record straight, “We just dressed in white that day. It was just a day. We were on our way to the Metro Awards and decided to wear white.” And so, explains Brenda, this may have appeared to be a wedding but it was a spontaneous celebration, with the two women happening by chance to be in white.

Sindi urges Brenda to show me “the picture”, and Brenda pulls out a newspaper cutting with a photograph of the two women in a passionate clinch. They explain that they’re always like this when they go out. “You should see us!” Brenda laughs, “It’s because we’re both jealous of each other. I get very, very nasty. I’m like that with everything that goes wrong for me. Don’t mess with me, baby.”

She further reiterates her point and shows that she’s not kidding on this subject. “Some women are scared of me,” she says, “I punch!” This, she explains, occurs when anyone has designs on Sindi. “I didn’t find her for them,” she continues, “They want to get to her through me.” She lowers her voice to a threatening tone. “I get very, very, very sleazy. Men also want to try and entice her. Then I go ballistic.” And does this happen often? “It happens every time we get out of this house.”

Changing the subject from the jealousy issue, I ask Brenda whether she’s aware that she is considered a gay icon. She smiles in surprise, because she says she never had any idea. I ask how it feels. “I feel good!” she smiles at this notion, “I feel so good!”

“Let me tell you about gay people,” Brenda says in response, “They’re the best people on earth! I’ve never seen such polite, loving, caring, honest people. They’re so giving. They’re even better than straight men. And they love their mothers!” Brenda hopes to become more involved within the gay community. “I want to do gay shows,” she says, “I’d like to go to the marches. But I tell you if we go we will have a big quarrel. They we come back home angry.” She explains that this anger will stem from women hitting on Sindi at a march – Brenda’s jealousy rearing its head once more.

“I have been to one march in Yeoville,” she continues, “I sang on top of that truck. I was just entertaining them. I help out whatever they do politically.” She notes the hypocrisy in the notion of traditional “families” – where many heterosexual couples have sex and then abandon the offspring. “You have street kids because of married people who go around doing funny things. I know a black gay guy with a Chinese adopted child. The way he treats him it’s like a normal father and mother.”

“I’ll have a proper marriage one day,” Brenda says after a moment’s pause. I mention the legalities of the State still not recognising gay marriage, and ask how the two women feel about it. “We’ll get married,” says Brenda defiantly, “When we decide, we will. As a South African music icon I think I should have my rights given to me.” They plan to extend their family too. “I was thinking of adopting also,” Brenda adds, “We’re just looking. That’s going to keep us together because you never know.”

“This crazy wife of mine,” Brenda smiles as she reaches out a hand to her partner, “She is so…” “Beautiful”? Sindi completes her sentence. “Yes, beautiful,” Brenda smiles, “And demanding.” Again they mention how much they love to go out, and not just to gay clubs either. “We go to any kind of clubs. We become the attraction of the night.”

Brenda with lover Sindi…Brenda gets up and leaves the room, leaving me alone with Sindi who takes this opportunity to tell me a little more about herself. While Brenda’s lesbian status hasn’t affected her career, Sindi unfortunately can’t say the same. “I’m a model and an actress and a trained teacher,” Sindi explains, “But I’ve been having problems since I’ve been involved with Brenda. It has affected a lot in my career. We’re doing educational theatre and my reputation is not good with the Education Department. They said, ‘The image you portray now is the lesbian lover of Brenda Fassie.’ That really breaks my heart.”

As a result, Sindi’s director asked her not to continue her stint with the theatre company. She has been out of a job for a while and is now looking to break into modeling and acting. “They act as if I’ve committed a crime by loving Brenda,” she adds.

Brenda enters the room and takes her place on the couch. I change the focus to talk about her incredible and long-lived singing career. At the height of apartheid Brenda was a musical sensation, and she says that the government of the day couldn’t put a stop to her career. “I’m a tough cookie,” she says, “Places I was told not to sing at I would go sing at. And I knew I would get into trouble.” As she did, more than once. “I was locked up many times and I had to pay a fine. And my songs got banned, some political songs.”

“I’m within the struggle musically,” Brenda adds, and what emerges is a woman who is as self-assured and defiant as she was in the days when she sang where, by government regulations, she should never have sung. “I’m still the same,” she says when she looks back at her legacy, “Nothing’s changed. I’m going on, don’t worry!”

I try to find out whether we can expect a new album in the future. “I’ll let the small ones do their thing,” she says of up-and-coming music talent, “Give them a chance.” But once she’s given them a bit of space she plans to come back with more power than ever. “They found me here, they’ll leave me here,” she promises, because she was around before the new talent arose and she’ll be around when they’ve had their day.

And how long does she think the new stars on the block will last? “How should I know?” she laughs, lighting up a joint as we wrap up, “But I’m still around!” In her capacity as a gay icon, the recently discovered title of which she is so proud, she has a message to all her supporters. “Be who you are, man,” are Brenda’s words, “You don’t have to change. Life is for living. However God has made you, be so. I am so.”