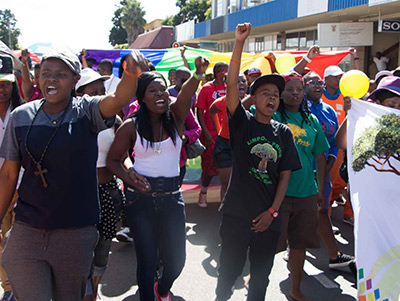 This weekend’s third annual Limpopo Pride in Polokwane was marred by the horrific rape of a teenage lesbian girl.

The event was held under the theme of “LGBTI rights are human rights.”

Cindy Molefe, from the Limpopo LGBTI Proudly Out group, told Mambaonline that the 17-year-old schoolgirl was trying to get home in the early evening after celebrations ended at the city’s Cricket Club.

A man offered to help her with directions but turned on the young woman near a graveyard and allegedly raped her. She was able to escape from the attacker, found help and called the police who returned to the scene and arrested the alleged rapist.

Molefe said that she had spoken to the victim over the phone. “She is very traumatised. The man knew she is a lesbian and he raped her,” adding, “This is the very reason why we are marching on the streets.”

South Africa has been plagued by a string of rapes and murders of lesbian women in recent years, leading to an international outcry and government and civil society efforts to address the crisis.

Molefe slammed the Polokwane Municipality for refusing to allow participants stay at the cricket grounds overnight in order to ensure their safety.

“We arranged to pay the venue for two days and for security overnight to avoid incidents like this. Everyone would be in one place and they could leave when it was light. But the municipality refused,” Molefe said, noting that there had been a recent series of rapes of lesbian women in the area.

“I wanted the extended time because people knew that there would be a lot of lesbians there that day. It was the safest place for people to be,” she explained.

The municipality came in for further criticism for the delay in issuing its approval for Saturday’s march. Molofe said that despite months of negotiations with the authorities she only received written approval on Friday, at 4pm.

To add to the bureaucratic ineptitude, the promised traffic officers who were meant to secure and escort the parade through Polokwane simply failed to show up, delaying the start of the march for an hour and a half. Eventually, the small procession was able to proceed with the assistance of SAPS officers.

“It’s very bad,” said Molofe. “We thought that we had a good relationship with the municipality this year but they failed us completely. It’s not acceptable.”

Organisers of Limpopo Pride have faced continued difficulties in holding the event. Last year, they were forced to sell their laptops in order to cover costs imposed by the city.

Despite the ongoing challenges, Molofe vowed to get to the bottom of the lack of support from the authorities and to hold the event again. “Yes, we are going to do it next year, we’re not giving up. We do hope things will be better though.”

She told Mambaonline that she would be visiting the teenage rape survivor today to offer her support, as well as the police to follow up on the status of the case.

Limpopo is one of the poorest provinces of South Africa. Its economy is largely driven by agriculture, mining and tourism.

View a gallery of images of the 2014 Limpopo Pride march here.