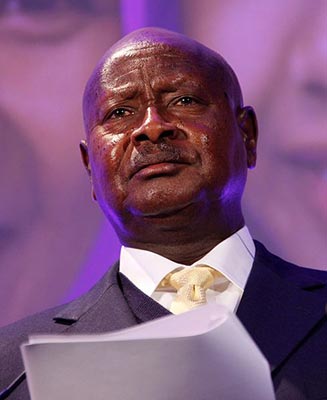 Uganda’s President Museveni has reportedly ordered the country’s attorney general to suspend an appeal filed against the annulment of the Anti-Homosexuality Act.

It’s also claimed that he wants to amend the law so that it is more “acceptable” to the West, following international outrage and limited aid cuts and sanctions.

In a press statement issued by the office of the Government Chief Whip on Tuesday, the parliamentary caucus of Museveni’s ruling NRM party said that it “accepted the court ruling” that recently nullified the law on procedural grounds.

The NRM also noted that that “there were other issues raised by the petition” opposing the law.

According to New Vision, President Museveni told the NRM caucus meeting not to rush the re-enactment of the law.

The party decided to set up a nine-person committee, chaired by Vice President Edward Ssekandi, to analyse the ruling and the law and to report back in a month’s time with a recommendation for a way forward.

Reuters reports that NRM MP Medard Bitekyerezo, who attended the caucus meeting, said that Museveni wants to amend the law so that it no longer outlaws consensual same-sex activity between adults and will only ban “the promotion of homosexuality”.

“[Museveni] said he wants the law back in the house but now says if two consenting adults go into their room and decide to be stupid, let them be,” Bitekyerezo claimed.

“What he said he doesn’t want, and which we must even increase the penalties, is recruitment of children [into homosexuality] and exploiting financially vulnerable youths,” he added.

Without the NRM’s support, it’s unlikely that efforts by anti-gay MPs – including Speaker of Parliament Rebecca Kadaga – to quickly re-introduce the bill in Parliament will get off the ground.

Hundreds of MPs reportedly signed a petition demanding that they be allowed to again vote on the law, which was annuled because not enough legislators were present when it was passed in December.

Even without the Anti-Homosexuality Act in place, gay sex remains illegal in Uganda with penalties including life imprisonment.