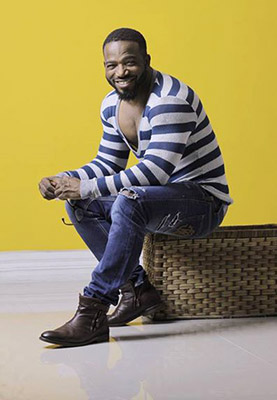 In a brave move for a Nigerian public figure, writer and brand expert Kenny Brandmuse has come out the closet.

A year after Nigeria enacted it’s draconian anti-gay law, Brandmuse, real name Kehinde Bademosi, used a series of moving and insightful Facebook posts to tell the world that he is a gay man.

In one post, he revealed that he had told his now ex-wife that he was gay before they got married, but that “I was only obeying the popular demand of traditions” and that she believed that they could overcome his sexuality.

He acknowledged that “this was my terrible mistake. No one should live their life based on dogmas and other people’s expectations.”

Brandmuse explained: “As far as I could remember, even though I was always dating girls, I had always preferred being with a man. I had fought it with every fiber of spirituality in me as a Pentecostal preacher boy… The more I fought my sexual preference for men, the more I became more miserable.”

When he later asked his ex-wife for a divorce because he didn’t want to cheat on her, she urged the judge in their divorce proceedings to have him charged with homosexuality, which carries a 14-year prison sentence.

“Luckily, I was in a civil court. Sadly, that day, I had to duck my face in shame as the crowd jeered at me for being whom I had always been. ‘You faggot’ ‘Oh what a shameful man!’ ‘homo!’ ‘Na wa o ‘ I still don’t know how I walked out of the court premises that day,” he said.

“It will be exactly a year today, when Nigeria instituted a law to jail people like me. What’s our offense? Because we are simply wired differently,” he added.

Brandmuse expressed his hope that: “One day, very soon, it will no longer be news that some us are gay because the next generation will regard all mankind with dignity, irrespective of sexuality. One day, very very soon, HIV and other such diseases will no longer be a thing to be ashamed of as those affected will live a much healthier life due to scientific breakthroughs and zero stigmatisation.”

After opening up about his sexuality, Brandmuse summed up his thoughts about the reaction he received online.

“In conclusion, having reviewed all emails, comments, hates and goodwill in the last couple of days, I’m happy to say this is not about us. It’s about the ones who don’t have the platforms to speak. Or the one whose voice has been muffled by the fear of being rejected.”

Late last year, Brandmuse came out as having lived with HIV for 15 years, something which he addressed in his more recent posts.

“The culture of shaming and silence has harmed us as people, especially in Africa. Affirm your child’s sexual identity early enough so she or he does not get into high sexual risks. Even for youth who are not gay. When we live in culture of silence, we push people to the down-low,” he said.

“Hence, every time you read about another gay man being added to the statistics of HIV or suicide or mental health, think about the roles you play. Together, we can stop this damage.”

Anti-gay sentiment has swelled in Nigeria after the federal Same-Sex Marriage Prohibition Act was passed early last year, further outlawing same-sex relationships and anyone who supports or operates gay clubs, societies and organisations.

Gay sex was already illegal in Nigeria under federal law, with penalties including 14 years imprisonment. Muslims in twelve northern states in Nigeria also live under local Islamic Sharia law, which allows homosexuality to be punished with death by stoning.