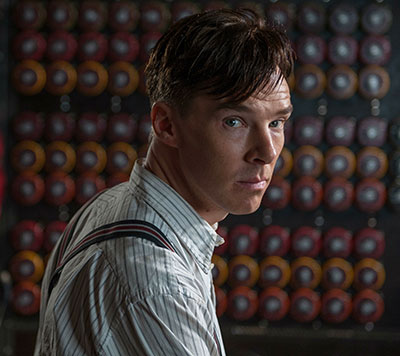 Benedict Cumberbatch is Alan Turning in The Imitation Game

Based upon the 1983 book by Andrew Hodges, Alan Turing: The Enigma and brilliantly adapted into an insightful screenplay by Graham Moore, The Imitation Game is a superb and evocative historical drama about the breaking of the enigma code at Bletchley Park during World War II.

Norwegian director Morten Tyldum elegantly weaves a very touching and tragic story of espionage, cryptography and sexuality extracting nuanced performances out of Benedict Cumberbatch as Turing and Keira Knightley as Joan Clarke, an odd couple who make up the mysterious collective which work on and break the seemingly impossible Nazi enigma code at the height of World War II. Using real war footage and blending in a fascinating portrayal of the mathematician, whose genius has only recently been acknowledged.

Set between the years of 1928 and 1951, The Imitation Game paints a moving portrait of a very complicated man, whose brilliance was only threatened by the inherent violence of war that engulfed England during the 1940’s as well as the prejudice which followed regarding his homosexuality in the early 1950’s, especially in the then provincial city of Manchester.

A Cambridge mathematician graduate whose thesis was entitled the Imitation Game, Alan Turing was socially awkward, shy, bullied at English prep school but was the perfect sort of individual who had the foresight and intelligence to develop a machine that cracked the seemingly unbreakable enigma code, a daily Nazi signal which gave countless GPS co-ordinates of where the enemy would be bombing next during World War II, with a minimum of 29 million variations.

Groomed by the newly formed MI6, Turing was recognised for his mathematical potential and yet later was vilified for his sexuality. He was charged with gross indecency for being a homosexual and subsequently punished by chemical castration in 1952 – this when homosexuality was still illegal in Great Britain. The story is beautifully portrayed by Cumberbatch as the key figure in one the 20th century’s biggest injustices. Although Cumberbatch does not make Turing’s sexuality overt it is soon apparent to all his male co-workers that he not interested in women.

Turing’s mathematical brilliance was the reason that the complicated machine he nicknamed Christopher ( after a schoolboy crush ), manages to decipher the seemingly unbreakable Nazi Enigma code and prevent World War II from continuing beyond 1945.

Widely regarded as the founding father of theoretical computer science Alan Turing’s life story has only recently gained prominence following a Royal pardon in December 2013 and a highly publicised internet campaign to posthumously clear his name and bestow upon him the recognition he never received in his own lifetime in Great Britain and beyond.

This campaign is led by Cumberbatch and is assisted by such prominent openly gay actors like the ubiquitous Stephen Fry who actually petitioned the Duke and Duchess of Cambridge in an open letter to clear not just Turing’s name but an estimated 50 000 other homosexuals who were also persecuted under this law. Ironically, fifteen years after Turing’s arrest, homosexuality was decriminalised in 1967 when the Sexual Offences act made it legal for men over the age of 21 to have sex in private in England and Wales.

In 1954, Turing died 16 days before his 42nd birthday, having undergone one year of oestrogen therapy, from an apparent cyanide poisoning. He wasn’t recognised for his wartime efforts in cracking the enigma code until 2013.

With a suitable musical score by Alexandre Desplat, The Imitation Game features a poignant race against time for Turing and his band of men and one woman, featuring one of the best performances by Knightley (Atonement, Anna Karenina) as Clarke, to save the world from Nazi tyranny. It was Clarke who become Turing’s confidant as she was equally dealing with a similar yet less pervasive prejudice: sexism.

Turing’s genius as a mathematician came at a price, his apparent lack of emotional empathy. Despite the enormity of his task, he remained ironically detached from the brutal war which engulfed Europe and the world around him.

The Imitation Game is a fascinating historical drama, with universal themes of injustice and perseverance despite the prejudice and the odds against an infuriating war bureaucracy, prejudice and espionage. This contemporary British film is highly recommended for those viewers that enjoyed Atonement and the 1984 film Another Country, featuring Colin Firth and Rupert Everett, which explores the homosexual proclivities of Guy Burgess, whilst at Eaton in the 1930’s.