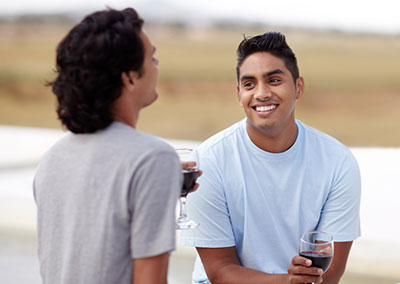 I am a 48-year-old gay male who recently contracted the hepatitis B virus. This is my story.

It all started late last year when out of the blue I felt very bloated; a feeling I was not accustomed to. This was replaced by on/off nausea and feeling tired. I thought it would pass but when it didn’t, I started to worry. The colour of my urine changed to a dark yellow and my stools to a clay colour instead of the “healthy brown”.

A month after the symptoms began I went to the “family” doctor (as in real family) who thought it was a stomach issue and prescribed something for that. But things didn’t change, so after two weeks I went back.

This time he took blood which indicated a high “bilirubin” count and submitted it for further testing as I had now become jaundiced (due to the liver being inflamed) – which is when the white of the eyes become yellow. When the doctor called me in for the test results he told me that I tested positive for hepatitis B.

I was a bit shocked, wasn’t sure what it was, was not told what to do and what not to do, except that I should see a physician. He also implied it wasn’t anything to be concerned about. That was it! He may have mentioned something about “advising a sexual partner” but the briefness of the conversation hardly allowed me time to catch my breath.

I went to the physician and his demeanour was also a bit evasive albeit a touch friendlier (they charge much more than a regular doctor ) and he asked me more questions than I asked him. He asked me “how I got it?” (I didn’t know). He advised me to stop drinking alcohol and said that I was highly contagious which meant that any sexual fluid transfer between myself and a sexual partner would pass the virus on to him (the sex partner, not the physician…lol).

He thought that mild exercise was okay and said to return two to three months later, by which time things should have sorted themselves out with a small likelihood of a liver biopsy if the problem didn’t go away. I was pleased that the outcome seemed to be time related but I still felt uninformed and unable to connect with the doctors, especially being a gay man talking to a heterosexual doctor about my sexual health issue.

This led me to the Ivan Toms Center for Men’s Health in Woodstock (a Health4Men clinic of excellence), which I now know is very much there for gay men to discuss their sexual health issues with open-minded and gay doctors. There my fears were laid to rest and the interactions with the doctors were pleasant, totally open and nothing seemed taboo or unmentionable. It didn’t change the fact that I had this virus, but I finally felt I had people who could help me beat this, whatever this was.

I started going to Health4Men’s clinic for regular blood tests (all consultations and blood tests are free) as they monitored my progress. My nausea was slightly reduced but then I started developing itchiness with the tired feeling persisting. I had slowed down, was hardly going out, living without booze (not that I’m a lush) and felt that it would not be fair to expose any sexual partner to what I had.

The clinic advised me to “slow down” and although the symptoms were easing, the news from the blood tests was still not great. However, the consultations were positive, interactive and my progress was monitored with a genuine interest shown in seeing this through. Over more time however, my body was not clearing the virus.

Hepatitis B often remains undetected and clears up without any treatment. You may even have the virus, not know you have it, suffer no symptoms and clear it. On the other hand, the above can happen but you clear it resulting in one infecting someone else with possible liver problems later in life. So rather “know your status”!

In the interim, my case was being discussed with the UCT liver institute, liaising on how to best move forward. They said that I needed a liver biopsy to determine the intervention which was now a must. The minor op confirmed an “unhappy” liver and a very high “viral load” and thus, how to be treated. This load (lol) just means that there are “tons” of unhealthy (infected) liver cells that need to be disposed of.

I’m now taking a tablet which should bring the enzymes back to normal levels and clear the infected cells. If it works, I’ll no longer be a carrier of the virus as it should be suppressed (which might take three to five months). I may have to take the tablet “for life” but that’s like brushing your teeth every day. I’ll return to the clinic periodically for blood tests to check that the tablets are doing their thing and other monitoring. I’ve now got “high iron levels in my blood” (they’ll have to drain some blood) and the kidneys are being checked closely as well.

I’m not embarrassed by what I’ve got and I’m aware future sexual partners might have a problem with having sex with “a once infected person”.  I simply want to get better, be able to exercise, consume alcohol (perhaps moderately) and have sex. I must have got it from someone who was probably unaware that they had it.

I encourage you to get tested and use the clinic facilities for which you will not be charged. Do your best to stay positive. You’ll probably find more support than you think. It’s good to know that there are people and organisations out there that want to and will help you.

Hepatitis B is a sexually transmitted infection (STI) that can be transmitted during unsafe sex. It can cause an acute infection lasting a short period, or may cause a lifelong infection leading to serious liver complications. There is a vaccination available. For more information visit www.health4men.co.za.