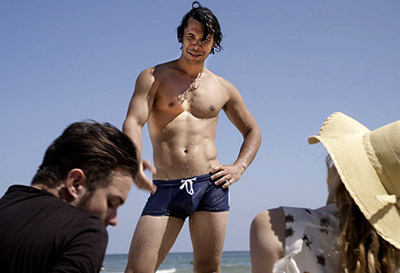 Co-directed by Tanner King Barklow (The Invisible War) and Israeli Gil Kofman, Lost in the White City is a fascinating film about a straight couple’s relationship which disintegrates during a Mediterranean summer in Tel Aviv.

As the film opens, it is evident that their relationship is compromised. Soon Kyle and Eva are swept into a precarious and intriguing Israeli environment where menace, seduction and danger are interlaced with a sultry awareness of each other’s more preferred sexual choices.

Kyle’s sexual awakening comes in the form of the gorgeous and gregarious ex-soldier Avi, played by Australian actor Bob Morley. There is a superb scene where Avi leads Kyle to a bombed out nightclub on the outskirts of Tel Aviv and Kyle shoots Avi naked in a semi-erotic pose for his avant-garde film; likening their coupling to that of German independent director Werner Herzog and actor Klaus Kinski.

In this significant scene, the sexual tension between Kyle and Avi is palpable onscreen, something that’s often masked by aggression and heavy drinking, as the boys hit the Tel Aviv nightclub scene.

Eva, while browsing through a suburban bookshop, meets Israeli-American writer Liam, played by Nony Geffen, who is the complete antithesis of the reckless, almost unfettered Kyle. Liam introduces Eva to a more sophisticated world of the intelligentsia, book launches and parties on yachts.

The filmmakers cleverly link Kyle and Eva’s journeys of self-discovery and their crumbling relationship with Tel Aviv’s disturbing sense of danger, thanks to its omnipresent potential for violence and suicide bombings. 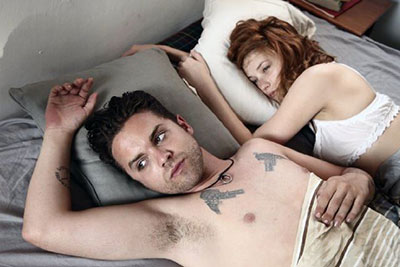 Israeli cinematographer Shahar Reznik paints Tel Aviv in a sumptuous glare of sunlight, contrasting with the night sequences which are filled with glamour, drugs and decadence, giving the audience a sense of the city being constantly under threat while its citizens dance the night away in hedonism.

Watching Lost in the White City, the audience is reminded of a similarly intriguing film about obsession framed by sinister intentions in director Paul Schrader’s classic The Comfort of Strangers, set in Venice and starring Rupert Everett and Helen Mirren.

Gorgeously shot and definitely aimed at a more open-minded audience, Lost in the White City sensually explores the dangers of summer romances, sexuality and unrequited dreams. This is highly recommended viewing.

Lost in the White City is one of the opening night films of the 2015 Durban Gay & Lesbian Film Festival (DGLFF), taking place from Thursday 18 June to Friday 26 June at the KZNSA Gallery. It screens on 18 June, together with Paternity Leave later than night. Tickets are R50 for each film. For a full schedule and more details, visit dglff.org.za.