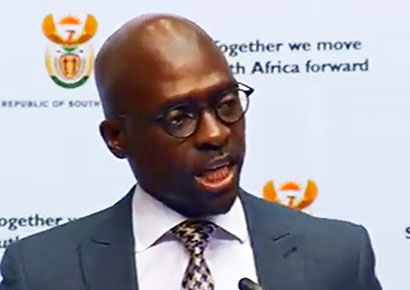 Minister of Home Affairs Malusi Gigaba has announced that American gay hate pastor Steven Anderson, and his followers, will not be allowed into South Africa.

The historic move follows a determined campaign by LGBT activists, led primarily by GaySA Radio, to stop the preacher, who calls for the execution of gay people, from spreading his shocking views in the country.

Anderson, who heads up the Arizona-based Faithful Word Baptist Church, was set to visit Johannesburg with 17 associates in a missionary style excursion on 18 September to “win souls” for his hateful cause. He and his supporters then planned to go to Botswana to set up a branch of his extremist church.

Gigaba cited the protection of LGBT people from discrimination in the Constitution and the Equality Act, which bans hate speech, as the basis for his decision.

“We have a duty to prevent harm and hatred in all forms against LGBTI, as any other person in a democratic state,” said Gigaba, including, he explained, needing to “prohibit foreigners who are likely to promote hate speech”.

Gigaba revealed that not only had he declared Anderson an “undesirable person” under the Immigration Act (as someone who advocates “social violence”), but that he had also withdrawn his visa waiver status, granted to US citizens.

“South Africa does not need more hatred advocated to our people,” said Gigaba, confirming that if the pastor attempted to enter the country he would be detained and deported.

The ban is a significant blow to efforts by American evangelists, who are facing growing resistance in their home country, to export anti-LGBT ideologies to Africa.

GaySA Radio’s Station Manager Hendrik Baird, who participated in the press conference with Gigaba, said that the minister’s decision was “a giant step forward, sending a clear message to the world that we will not encourage hate, bigotry and intolerance disguised in any form.”

He went on to say: “As South Africans, we are proud that our government has today sent a strong message to our citizens and the rest of the world, namely that LGBTI people are as much South Africans as anybody else, and that we are deserving of the same rights and respect as everybody else. When push comes to shove, we stand together as a nation and do what is right. I cannot tell you how encouraging this is.”

“Today we took a big leap forward. Today we celebrate the fact that we are as valued as every other sector of our society, as deserving of love and respect, appreciated for playing a valuable role in building our country’s future, and most importantly, that we are protected.”

Baird thanked Minister Gigaba “for taking this matter seriously and for coming to the right decision that is in the best interests of South Africa,” and for making “an important statement here today”.

He added: “We vow to stay vigilant and to campaign against others who may want to follow in this group’s footsteps.”

Baird also addressed the South Africans who invited Anderson to the country in the first place: “Your hatred has not gone unnoticed, but it has been ineffective. You should hang your heads in shame today, and should take a long and hard look at yourselves and the way you try to make people other than yourself, less than human. We urge you to start a conversation, to put aside your fears and prejudice, and find the truth – we are all the same, no matter whom we love.”

He further expressed solidarity with LEGABIBO in Botswana, where Anderson aims to open a branch of his church. “We support you, our brothers and sisters, and we will help you wherever we can. We urge the government of Botswana to protect their LGBTI citizens and take the action required to stop the hate from spreading in that country,” Baird said.

He called for 13 September be known as ‘Rainbow Day’, “a day to be celebrated annually as a victory for LGBTI rights in South Africa”.

Anderson has stated that killing gay people would free the world from the AIDS epidemic. Most recently, he praised the Orlando massacre as “good news” because “there’s 50 less paedophiles in this world”. Anderson has continued to preach that governments must execute gay people.

During the campaign against the preacher, Gigaba was presented with more than 60,000 petition signatures calling for a ban on the evangelist, as well as a comprehensive dossier on Anderson’s activities, compiled by GaySA Radio’s attorney, Coenie Kukkuk.

Lerato Phalakatshela, Hate Crime Manager at OUT LGBT-Well-being and spokesperson of the Love Not Hate Campaign, welcomed the decision taken by Home Affairs. “This has given us hope that our voices and concerns are being taken into consideration,” he said. “South Africa is a predominantly homophobic nation and we do not need to import extra homophobia from the USA. Minister Gigaba has reaffirmed that the rights of LGBTI people are indeed protected and upheld by our Constitution.”

Mambaonline congratulates GaySA Radio, Baird, Kukkuk and the thousands in South Africa and across the world who supported the campaign for their efforts that led to today’s groundbreaking affirmation of LGBT equality and humanity.