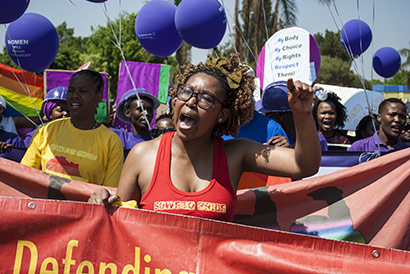 For the first time in its 12-year history, Soweto Pride has been postponed after the authorities threatened to shut it down.

The historic Pride, located in one of South Africa’s largest and most iconic townships, was set to take place this Saturday 24 September in Meadowlands.

On Tuesday, the NGO behind the event, FEW (Forum for the Empowerment of Women), announced the “coerced postponement by the state” with “great regret” and said it had been discriminated against and “bullied by state entities who seem intent on stemming out and discouraging all forms of political protest”.

FEW revealed that Soweto Pride 2016 had been re-graded from a “low risk” to a “medium risk” event by the police, emergency services and City of Johannesburg entities, apparently due to “unruly behaviour” at last year’s event.

“We have been unequivocally informed that should we not comply with these conditions by Saturday, Soweto Pride 2016 will be shut down,” said FEW.

It explained that it had asked for the reported cases substantiating the claimed “unruly behaviour” and physical altercations at Soweto Pride 2015 but has still not been provided with this information.

FEW also said that the authorities had demanded that it charge an entrance fee as a means of crowd control and obtain a liquor licence and sell alcohol at the venue, both of which it says is against the ethos of the organisation. Cooler boxes were also banned by the authorities to limit the intake of alcohol and thus minimise the “risk of chaos”.

“We have attempted to negotiate with the relevant stakeholders. However we were advised that their power is absolute and cannot be challenged,” said FEW. “During the meetings held with relevant stakeholders were informed that we ‘cannot be trusted’ and that they ‘cannot tell whether you are male or female’.”

FEW stated that it chose to postpone the event rather than “host Soweto Pride on their terms”.

The organisation went on to insist: “We will not be strong-armed into changing the very essence of our Soweto Pride to fit their desires. FEW will be taking the matter further with the relevant authorities. We will not meekly accept the closing down of communal spaces to LGBTI persons.”

FEW has urged the LGBT community and those who “support our rights guaranteed in the Constitution (amongst them the rights to safety, freedom of association, and freedom of movement)” to join them “in our fight to eradicate discrimination in our own communities by the very entities tasked with protecting and assisting us”.

FEW Board Member, Adv. Mandisa Mbatha-Beckett, told Mambaonline that while there was no chance that the event would take place on Saturday, “Soweto pride is definitely happening [sometime] this year, although we have not decided on a date”.

She said that the organisation would petition the National Commissioner, the Premier’s Office and the Mayor’s Office and is also considering drafting an urgent court application to lift the restrictions.

“We tried to negotiate and let them understand that we are a small organisation and do not have these kinds of resources and that they are essentially telling us that we cannot hold Soweto Pride. It’s also not necessarily about the financial implications but it is also about the control of the event and how we should have our events. They suggested that we only have the march and not have the post Pride event.”

Mbatha-Beckett argued that the issue of cooler boxes was not negotiable. “We stand for access to all and affordability to all – we cannot comply with conditions that conflict with our vision and mission. We fought to have the rights to have the cooler boxes so that we do not exclude people who cannot afford to buy alcohol at Pride.”

When asked if the organisation is now facing similar restrictions imposed on Johannesburg Prides in the past, events which were condemned as exclusionary, Mbatha-Beckett said that, “perhaps had we known back then these were the restrictions that were being imposed – we could have mobilised around that. I was not personally aware that these were the issues that they were facing.”

Mambaonline believes that the authorities should differentiate between a human rights event such as Soweto Pride and other commercial and entertainment events. We also believe that the city should provide Soweto Pride and other Pride events with support and infrastructure, at least at a vastly reduced rate. Soweto Pride is an important part of our LGBT heritage and must be allowed to take place.

A petition has been set up calling on the authorities to lift the restrictions imposed on Soweto Pride. You can show your support and sign it here.