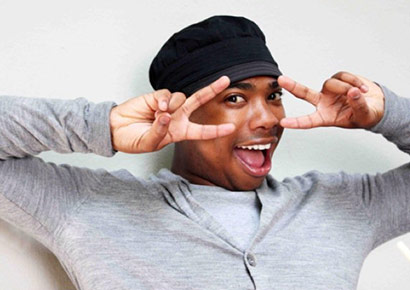 This year marked the eighth anniversary of the influential Feather Awards. Initially a glitzy exercise in celebrity worship (honouring actors, singers, politicians and other public figures who found favour with the gay community) it’s since grown to include LGBTI role models and activists.

In 2016, the Feathers added further gravitas to its purpose; travelling across South Africa to host eight workshops or ‘community dialogues’ on pressing LGBTI issues.

For Thami Kotlolo (aka Thami Dish), the co-founder of the awards, it’s all gone exactly as planned. Starting out as a child actor and TV presenter, he went on to study and work in musical theatre, journalism, and advertising.

Combining this experience, he opened Quad Republic; a successful communications and events company in Johannesburg. At the age of 23, he created the Feathers. Sponsored by Chevrolet and supported by local government, it receives wide mainstream media coverage and is broadcast on SABC.

Mambaonline found out more about this talented and inspiring gay entrepreneur and his vision for the Feather Awards.

Tell us about your upbringing…

I’ve been gay since day two. I grew up around Mamelodi (Tshwane) and I’ve always had a family that supported me. They knew and could see that “this one has got a bit of a broken wrist”. I never had a terrible upbringing when it comes to it being welcoming to gay people.

Were you ever bullied?

I was a strong character. I was very firm. I didn’t hide who I was. And that made it difficult for people to attack me. There was nothing they could say that would embarrass me or shake me or threaten me.

You’re quite lucky in that sense.

I don’t think it was luck… In my high school days I might have been… a little bit of a bully. Because I was always in defence. If you thought you had anything to say about me and my sexuality, I was like: “Bring it on… I’m going to shame you; I’m going to embarrass you. Don’t start that nonsense”.

Maybe that’s where part of that “bitchy” side to some gay people comes from; It’s a defence mechanism.

Do you remember the first time you met another person you realised was gay?

There was a guy called Sello; he’s still around. He was one of those gay people who were into doing hair and makeup. And he used to visit my family and my aunt a lot. I saw this person and I could resonate with him. I found him fascinating.

When it comes to the boys, or me tapping into my sexuality, I was in high school meeting up with a boy and thinking, “Oh my God, I think I like him” and then, “Oops I think we kissed”. And the rest is history! [Laughs]

Describe yourself at the age of 15. What kind of person was Thami?

I was a very hyperactive, and still am, teenager. I was very active in sports. I ran a little dance club in high school. At 15 I was a choreographer at school. I was involved in a lot of arts. I was fantastic, I was fabulous and I was popular.

Did you have a coming out experience with your family?

I brought different kinds of gay people to the house. I was like: “See who I hang around with? They will tell you… you’ll get the message.” And, when I was 16 or so, my mom – my friend was in the kitchen – looked at me and said: “So this is who you are.’” And I said, “Yes”. And that was it! 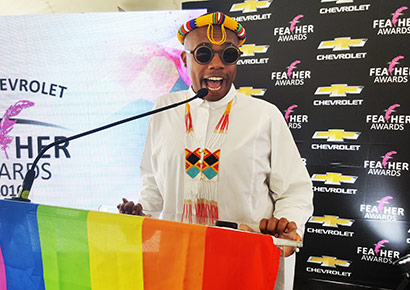 What about in the workplace?

I walked into a meeting and I’m in my long shorts and whatever and I looked somewhat different. And before the meeting started, I said: “Hi, I’m Thami and I’m gay… let’s continue with the meeting”. I’ve done it numerous times. I think it just breaks the ice…

If you could, would you choose not to be gay?

Do you think that being gay has held you back in life?

Not entirely. Being unique and different will always present you with challenges. And I think that because we’re exposed directly or in a secondary way to some kind of humiliation or being boxed by society, we are somewhat scarred. Every single day you’re kind of going against the voices that tell you that you’re not good enough, that society doesn’t accept you. I just feel like I’ve had to work a little harder.

Do you think you’re seen as a role model?

I just go about doing the little bit that I do and if other people find it inspiring and they see me as a role model… it’s theirs. I appreciate it, but I don’t wake up wanting to be a role model.

Why did you decide to start the Feather Awards?

I love the entertainment industry and I wanted to start an awards ceremony that would drive issues around sexuality and LGBTIs. And what better way than to do it in a light-hearted way using that kind of platform. So myself and [TV and events producer] Baby Joe developed the Feathers.

They were initially criticised for being too superficial…

Look, I had the blueprint. I always knew the strategy. Eight years ago, there weren’t so many LGBTI people who were out there and it wasn’t as cool to be who you are. And I think the media then would not have given it so much attention. So I wanted to create a platform and then grow it. Being part of the LGBTI community we’re always having something to say about anything else that’s LGBTI. Everyone’s got an opinion. I was like, “Christmas is Christmas; you celebrate it your way. If you have a problem, start your own awards!”

How have the awards changed over the years?

It’s the work that happens behind the [awards]. It’s not just people walking up and saying “I’ve won”. The dialogues that we’re doing, the talks, collecting the data from people on the ground around issues of sexuality: That’s been the most exciting thing to work on. And I think that’s where we’re going.

What impact do you think the Feathers have had?

It’s enabled the dialogue to continue. When you [as a nominee] are called for an interview to talk about the Feathers it’s also an opportunity to talk about LGBTI issues. And that is helping to inform society at large.

How successful were the dialogues and what are you most proud of?

I’m most proud of the fact that we actually did them! We went to eight provinces. We attracted around 300 people at each dialogue. The exciting thing was that we were not only talking to ourselves; we spoke to a lot of mothers, fathers, community members – and we reached out to those people in the room who I hope will take the message home and will continue the conversation.

Tell us about Thami Dish Foundation.

Every year – and I do hope to increase the sponsorship – I want to take one or two or three LGBTI people into school. Pay for their fees, do mentorship programmes…

What inspired you to create the Foundation?

Having gone to a multiracial school, it seemed to me that the culture of white families doesn’t often take away the opportunity for education. I’ve seen more black families abandon their [LGBTI] children who live in the house – [the parents] quickly move their investment or focus or support to the other child who is heterosexual. So I wanted to be able to take those LGBTI kids into school. And also to break the stereotyping of gay people: Not all of us are dancers, makeup artists, stylists or fashionistas. I don’t in any way look down on those things, but we’ve been boxed. You see a gay person of colour and everyone is like, “Are you in fashion?” You get to a point where you’re actually offended by it.

What issue within the LGBTI community frustrates you the most?

Unity! I just think that we’re not one. We’re not united as the LGBTI community. Too many voices, too many opinions… Black, white… you’re queer, you’re drag… I want to see a united community. To really understand the acronym LGBTI, to really respect it and for us to see each other. 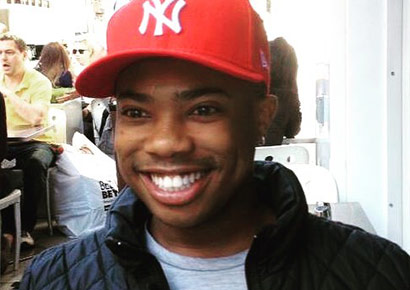 Do you think that people who are successful, who have made it, have more of a responsibility to come out?

Where do you see the Feather Awards going in the next five years?

Uganda! [Laughs] I do want to do more things in Africa. I want there to be Feather Awards for Africa. I think South Africa has got a responsibility to change the status quo when it comes to LGBTI on the rest of the continent. It’s a tough one but we’re privileged to have the Feathers here and with that comes responsibility.

What advice would you give to a gay teen about living life openly and successfully?

There’s never a perfect time to come out and be yourself. You’re always going to experience what comes with coming out; whether you’re 13 or 26. So free yourself as early and as soon as possible.

What do you do in your free time?

I hang out with my boyfriend and his family. I like to stay at home. I cook a lot. I listen to a lot of music. I like to travel.

Describe Thami today. What kind of person is he?

The winners of the eighth annual Feather Awards will be announced on Thursday 17 November.