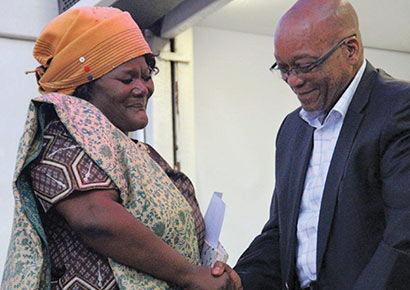 It appears that the principal accused of the homophobic abuse of 38 high school pupils in the Eastern Cape will not face any disciplinary action.

It was reported last month that Principal Nomampondomise Kosani of Ulwazi High School ‘outed’ the girls, aged 14 to 18, as lesbians to their parents, guardians and teachers after two female pupils were found kissing in the toilets.

The humiliated girls were allegedly subjected to insults and were told to ‘stop’ being gay’.

Some of the parents reacted with anger and said they were prepared to use violence to ‘make their children straight’.

Eastern Cape Education Department Spokesperson Malibongwe Mtima told Mambaonline that there had been an “internal investigation” into the matter but would not confirm if Kosani would face any consequences.

“If we say we are going to deal with the principal, the fact is that others may not learn anything from the exercise,” he commented.

“What we did was to sensitise everyone [at the school] about this. We had a series of advocacy campaigns with the partners; gays and lesbians, human rights, [the departments] of justice, social development [and] education, and everyone,” he said.

Mtima explained that the department’s intention was that, “despite the fact that the issue has happened, you want to ensure that it never happens again. You can only do that by educating people so that they respect each other’s rights.”

He also noted that learners at the school had received counselling over the incident.

Javu Baloyi, Spokesperson for the Commission for Gender Equality (CGE), told Mambaonline that it had been invited to raise awareness about “rights based issues” at the school to help “remedy the situation”.

He revealed, however, that in a parallel process, the CGE was also in the midst of investigating a formal complaint against the school and the principal regarding the issue.

“A lot of kids are coming forward about what the school and the principal in particular may have done to them,” he added.

Baloyi would not be drawn on the possible outcome of the investigation, only that it may provide “recommendations and a way forward”.