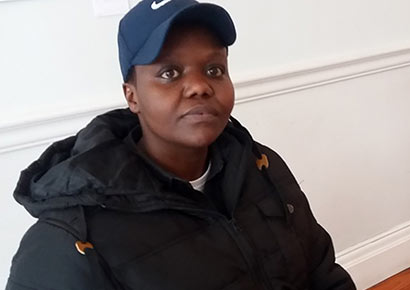 Many gay and lesbian refugees fleeing persecution in other African countries seek asylum in South Africa, says 27-year-old Somali refugee Shamsa Ally Haji. But their path is not easy.

“Being a refugee and a lesbian is difficult,” she says.

Coming to a new country where often they do not know anyone, often with very little money, is hard enough for refugees. In addition, application for asylum is difficult because of the language barrier and sexual orientation discrimination by officials, says Haji.

And it is a challenge to get a job as a lesbian as some employers also discriminate, she says.

Haji lost both her parents in Somalia when she was ten years old. Her mother’s employer took her in.

In 2002 the family moved to Port Elizabeth with her. It was agreed between her uncles and her guardians that in South Africa she would look for work and send money home for her siblings upkeep. Haji had to drop out of high school in Somalia.

Haji says she felt different from childhood. She did not like to wear long dresses and the veil. She preferred jeans and caps and enjoyed playing soccer. Her guardians told other Somalis who complained about her behaviour that she would change when she is a grown-up woman.

At 20 she started to date women secretly. Her foster mother asked her to stop acting like a “tomboy” and when Haji ignored her advice the foster father quickly arranged a husband for her.

It was in 2015 on a Friday when the father told her, “Today is your engagement day. The ceremony will start when we come back from the mosque, soon after lunch. You should get married before you shame this family.” When she replied that she loved women she was told this was a sin.

Haji says that after lunch when the ceremony started she stood up and shouted that she would not be getting married because she had told her foster father already that she was attracted to women. She says other guests at the ceremony shouted at her and her foster father assaulted her. Her brothers took her to hospital. She decided not to lay a complaint with the police as her friends suggested, but rather to flee.

Her friends bought her a bus ticket for Cape Town, a city they said was safer for gay and lesbian people.

Haji did not know anyone here in Cape Town but found a family to stay with. Through the family she met a Somali man who introduced her to People Against Suffering,Oppression and Poverty (PASSOP).

PASSOP referred Haji to Pride Shelter Trust, which gave her shelter and food for a month. In the morning she would go job hunting. Through PASSOP she got a part-time job at a city centre restaurant, where she works three days a week cleaning and chopping vegetables in the kitchen.

PASSOP is renting a place for her and others but only for three months. She is worried that she might not get a permanent job and place before the three months assistance from PASSOP is up.