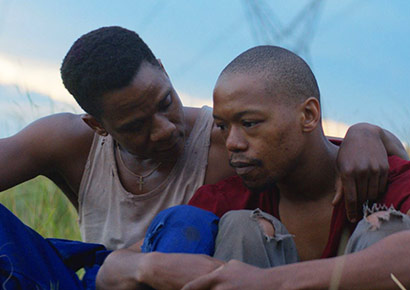 Inxeba (The Wound) has been temporarily ‘unbanned’ by the Pretoria High Court and will be back on South African cinema screens from this Friday, although only for those older than 18.

Tuesday’s court decision followed an urgent application brought by Webber Wentzel on behalf of the film’s producers and distributor to have its controversial X18 rating reversed.

The application also sought an urgent interim court order allowing the acclaimed film to be screened in mainstream cinemas for the first time since the Film and Publication (FPB) Appeals Tribunal last month changed the original 16LS age restriction to X18.

The X with immediate effect has been removed from the 18 classification by the court. While an 18 rating allows a film to be screened in any cinema to those over the age of 18, a film classified X18 can only be shown in adult sex stores.

Contralesa Gauteng, the Man and Boy Foundation and the FPB’s Appeals Tribunal all opposed the producers’ application. They eventually capitulated, however, on the question of urgent interim relief and the court then granted an urgent interim order instructing the film to be screened pending a thorough review of the Appeals Tribunal’s decision.

The battle is not over yet and a decision must still be made by the High Court as to the film’s final rating. The court now awaits representation from all parties both pro and in opposition to the decision of the Appeals Tribunal. The final review of the Tribunal’s decision is scheduled to be heard on Wednesday, 28 March.

“This is a development of critical importance to Inxeba“, said the producers in a statement. Another positive development, they said, is that the Film and Publications Board (as opposed to the Appeals Tribunal) has filed court papers justifying its original decision to classify Inxeba at 16LS and affirming this to be the correct rating with no intent of amending it.

The board pointed out that it is a separate entity from the Appeals Tribunal, and that it does not agree with the X rating, which was not a rating requested by the complainants; Contralesa and the Man and Boy Foundation.

“I am hopeful that the capitulation of The Tribunal, Contralesa Gauteng and the Man and Boy Foundation to remove the X rating will assist in ensuring that the violent acts performed in opposition to the film are brought to an end, and that members of the public who wish to exercise their right to engage with Inxeba are no longer prohibited from doing so,” said producer Cait Pansegrouw.

Inxeba’s director John Trengove also responded to the court order: “Getting back onto screens in mainstream cinemas is a vindicated victory for the film, but the South African film and arts community still deserves to hear a real explanation of how the Tribunal arrived at such an embarrassing violation of our legal and constitutional rights in the first place. We look forward to more clarity on this score in the weeks to come.”

“I honestly have nothing to say about a statutory film body promulgating homophobia and censorship by declaring that the most awarded and critically acclaimed South African film of all time has no artistic merit,” said Inxeba star Niza Jay.

“I am elated that the film is back in cinemas. I hope that the conversation spurred by the film will go beyond being a hot topic and that it will be had in our homes, families and communities. This film is bigger than all of us who made it. Inxeba is South Africa’s film and South Africans should take pride in its accomplishments, but we must always engage with it critically and not romanticise it, so that when bigots try to tyrannise our film industry, we do not fall into the trap of playing victim. Our art is our truth, and our truth is our power.”

“To say we knew we’d be justified wouldn’t be doing justice to ourselves or the country,” added co-producer Batana Vundla. “The winner here is our constitution and the recognition of the lived experiences of LGBTIQ South Africans.”

Helen Kuun, MD of Indigenous Film Distribution, urged cinemagoers to stand against piracy and illustrate their solidarity with freedom of speech for artists by going to watch Inxeba in theatres from 9 March.

“We are vindicated by the court order against a Tribunal ruling which was simply unlawful and could not reasonably be justified by anyone who has seen Inxeba,” she said. “Now that we have secured legal means by way of a court order to make the film available to all those who want to see it publicly, we urge fans to go out there and show their support by seeing it in cinemas.”