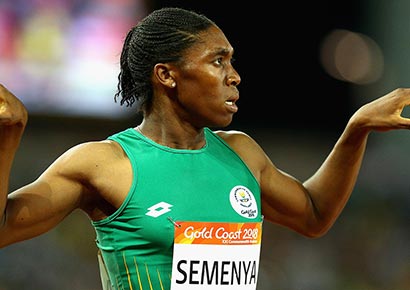 There’s growing outrage at the latest attempt to strip away Caster Semenya’s natural talent so she can be classified as a “normal woman.”

Based on the idea that these levels give some women athletes, such as Semenya, an “unfair” advantage, the rules could force the track star to artificially lower her natural testosterone levels in order to be allowed to compete as a woman.

Writing for The Guardian, academics Katrina Karkazis and Rebecca Jordan-Young insisted that the new policy is “about targeting and impeding a few exceptional women of colour from the global south, especially Caster Semenya.”

They added that, “It was a particularly cruel jab to release it on the heels of her 800m and 1500m wins at the Commonwealth Games.”

South Africa’s Minister of Sports and Recreation Tokozile Xasa slammed the IAAF decision and said that it was “at best a witch-hunt against our athlete Caster Semenya and at worst, a decision to lessen the impact of mainly African athletes.”

He believes that the decision is “intended to appease aggrieved member countries who have failed to put their money where their mouths are, by winning medals, fairly and squarely.”

Xasa said that the government is considering a legal challenge to overturn the regulations which are set to come into force in November.

Gideon Sam, President of the South African Sports Confederation and Olympic Committee (SASCOC), said the organisation was also disappointed with the new rules and argued that the “protection of athletes and their dignity and human rights” should be “at the top of the agenda.”

“We wish to place on record that Caster Semenya has never engaged in any performance-enhancing activities and any enhanced testosterone levels are due solely to her genetic make-up,” he pointed out.

Meanwhile South Africans have taken to social media in their thousands to express their support for the country’s most famous and successful LGBTI athlete.

Ridwaan added: “Yes. Let’s ban all first world athletes because they had better facilities to train, bigger budgets for their athletes….. is that not unfair advantages to the rest of the world?”

Semenya herself has not directly commented on the developments, but posted a message on Instagram, presumably in response, stating: “I am 97% sure you don’t like me but I’m 100% sure I don’t care.”