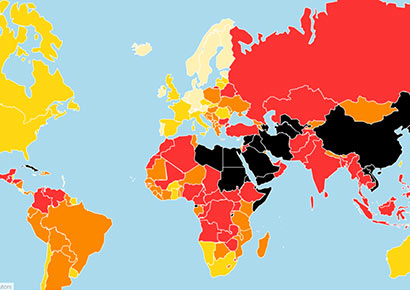 As the world marks Press Freedom Day, the 2018 country rankings appear to once again suggest that a free press is broadly aligned to LGBTQ equality.

Reporters Without Borders (RSF) has released its latest World Press Freedom Index that ranks 180 countries according to the level of freedom available to journalists.

In an accompanying colour-coded map, the darker the region or country the worse the freedom of the press is.

The release of the index coincides with World Press Freedom Day on 3 May, first proclaimed by the UN in 1993, which celebrates the fundamental principles of press freedom.

According to the 2018 index, South Africa is ranked number 28, up three places from 2017. The index also reflects a general rule; the freer a country’s press is, the freer its LGBTQ community is likely to be.

For example, the top five nations on the index are Norway, Sweden, Netherlands, Finland and Switzerland, all of which boast progressive laws and widespread acceptance of LGBTQ people.

Some of the worst offenders in restricting the press, Syria, Saudi Arabia, Iran, Egypt, Uganda, Iraq, Nigeria, Indonesia, Yemen, Sudan and Somalia are included in the bottom half of the list; and all have terrible track records when it comes to LGBTQ rights. In fact, in eight of these nations the death penalty for same-sex sexual acts may be applied.

It makes sense. Much of the oppression of LGBTQ people is based on fear, stigma and ignorance. In a society with free speech and media, LGBTQ people are more likely to be given a voice and not be seen as a faceless threat.

But while this rule seems to be generally true, there are some significant exceptions. Ghana, for example, is Africa’s country with the highest press freedom ranking (23), higher than South Africa (28), Spain (31) and the UK (40).

Yet, according to a recent report, LGBT people in Ghana face arrest, prosecution and not uncommon mob attacks and family violence for being who they are. That’s certainly not the case in the other three countries.

Also Malawi, which last month arrested a man on suspicion of being gay, has a higher press freedom ranking at 64 than Japan at 67. Kenya, at number 96, continues to criminalise homosexuality, while Mozambique, which does not, is ranked behind it at 99.

Brazil, which has LGBTQ-affirming laws such as marriage equality (but the world’s highest LGBTQ murder rate, is ranked as low as number 102 on the index.

Despite these quirks, it can nevertheless be said that freedom of all kinds are generally closely intertwined with LGBTQ equality (as are stronger economies and democracy, other studies have shown.).

This affirms another truth; that LGBTQ rights are indeed human rights and that restricting the freedom of one group or community is a broad indicator that everyone in that country is likely to be deprived of freedom at some point and in some way.