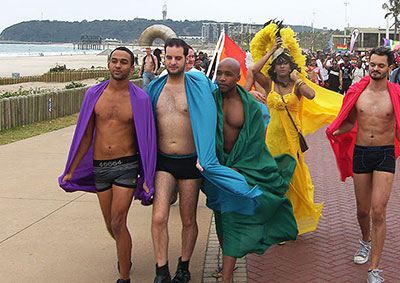 The City of Durban will be hosting its annual LGBTQ+ Durban Pride on Saturday, June 30 2018.

Organised by the Durban LGBTI Community and Health Care Centre in partnership with Aids Health Foundation, this year’s pride will take place at the Gugu Dlamini Park Extension, situated in the Durban CBD.

In a press statement released by the centre, this year’s theme is “Keeping To The Promise.” The theme is a call for families, political parties, leadership organisations and funding agencies to keep to the promises they made towards the advancements of the rights and lives of the LGBTQ+ community which, the organistion says, they have broken.

The event will also highlight the issue of corrective rape against lesbian members of the community and the discrimination faced by people living with HIV and Aids.

The pride week programme leading up to the Liberation March and Festival on the Saturday will include poetry sessions and live entertainment and spiritual awakening services by faith organisations from Christian, Hindu and Muslim communities. There will also be film screenings and workshops by the Durban Gay & Lesbian Film Festival.

Gates open from 10 a.m. and the official pride march will commence at 12:30 p.m. The parade route is yet to be confirmed. Those who are interested in performing at the event have up until June 8 to submit entries. Entries for Mr and Mrs Durban Pride close on June 15. For more information on the official pride march, visit the Durban Pride website.

The official pride after party will be hosted by Club Altitude in association with ViewsTwenty5, with ticket prices ranging from R120 – R400. For more information on the after party visit the Durban Pride Facebook page.