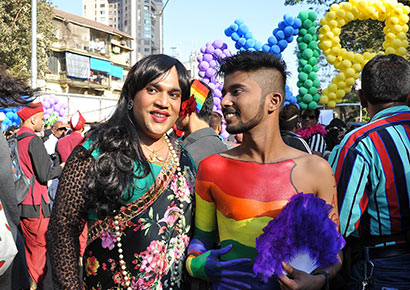 In a stunning victory for one of the world’s largest LGBTI communities, India’s Supreme Court has finally ruled that the Section 377 ban on homosexuality is unconstitutional.

On Thursday morning, a five judge bench of the court unanimously found that the infamous 158-year-old section of the Indian Penal Code does not apply to private consensual sex between people of the same sex.

The law punishes “carnal intercourse against the order of nature” and has been used to arrest and convict thousands of LGBTI people over the decades. In 2015 alone, at least 1,491 people were arrested under the law.

In its historic ruling, the court said it was obligated “to protect the dignity of every individual of the society, including people from LGBT community. Sexual orientation is natural and people have no control on it.”

It found that, “Section 377 results in discrimination and is violative of constitutional principles. Consensual sex (between adults) in private is not an offence.”

According the Times of India, Justice Chandrachud said that decriminalising homosexuality is a major step in burying the ‘colonial ghost’. Section 377 was introduced in 1861 during the British rule of India. He added that the state has no business in interfering in the private life of any citizen, including members of the LGBTI community.

Justice Dipak Misra also noted that, “Respect for each other’s rights, and others are supreme humanity. Criminalising gay sex is irrational and indefensible.”

LGBTI people across India celebrated the judgment as it was announced. “We have finally got justice,” Ashok Row Kavi, LGBTI rights activist and founder of Humsafar Trust, told ANI. “We are finally ‘azaad in azaad Hind’ [free in free India].”

British LGBTI rights activist Peter Tatchell welcomed the news and noted that, “this historic legal ruling sets free from criminalisation almost one fifth of the world’s LGBT+ people. It is the biggest, most impactful gay law reform in human history.”

Section 377 was previously repealed for four years by the Delhi High Court in 2009. In 2013, however, the Supreme Court shocked the world when it overturned the lower court’s ruling and asserted that the ban on homosexuality was not unconstitutional. Today’s decision reflects a more mature, liberated and progressive India for all.