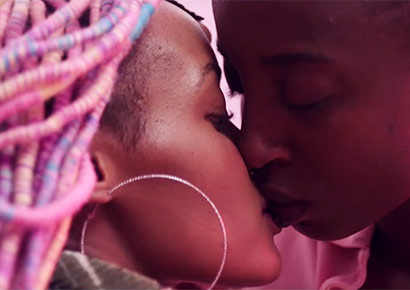 Kenya’s High Court has temporarily lifted the ban on the groundbreaking lesbian film Rafiki, which means it is now eligible to be selected for next year’s Oscars.

On Friday, Justice Wilfrida Okwany ordered that the film be allowed to be screened to adults in Kenya for seven days.

“I am not convinced that Kenya is such a weak society that its moral foundation will be shaken by seeing such a film,” Okwany said in her ruling. Rafiki will be screened daily in Nairobi from 23 to 29 September.

Thanks to the ruling, Kenya’s Oscars Selection Committee will be able to consider the film for entry to the Academy Awards in the Best Foreign Language Film category.

Wanuri Kahiu, the film’s director and co-producer, who sued the state to overturn the ban was elated when she heard the news, shortly after its premiere in Paris.

“I am crying. In a French airport. In SUCH Joy! Our constitution is STRONG!” she tweeted. “Give thanks to freedom of expression!!!! WE DID IT!”

The court’s decision was a blow to the Kenya Film Classification Board (KFCB) which banned the film in April, shortly before it became the first-ever Kenyan movie to screen at Cannes.

Ezekial Mutua, the board’s virulently homophobic CEO, raged against the decision on Twitter. “It would be a tragedy and a shame to have homosexual films defining the Kenyan culture. That’s not who we are and homosexuality is not our way of life,” he said.

Mutua asked, “What pleasure, pray, does a person of a sane mind find in watching girls having sex with other girls?” adding: “Shame on those foreign NGOs who want to use gay content as a tool for marketing the film industry in Kenya.”

He continued: “Our enforcement officers and the police will conduct surveillance and random checks in all public theatres to ensure the orders of the court are strictly adhered to and no children are allowed to watch homosexual content. Proof that one is an adult will be required at theatres.”

Rafiki (meaning ‘friend’) is based on the award-winning short story Jambula Tree by Monica Arac de Nyeko. It is a coming of age tale about two Kenyan girls who fall in love and whose desire for each other flies in the face of African conventions.

I am crying. In a french airport. In SUCH Joy! Our constitution is STRONG! Give thanks to freedom of expression!!!! WE DID IT! We will be posting about Nairobi screening soon. Follow @rafikimovie