Bougardt has also vowed to see Anderson, who was banned from South Africa, return to the country in order to open a branch of his Arizona-based hate church.

Bougardt made the statements in a Facebook post on Friday morning, while sharing a photo of himself and Anderson at the radical Marching To Zion Conference in Atlanta.

Anderson is a speaker at the anti-Semitic event. Topics at the fundamentalist conference include “the fake state of Israel” and “the evils of the religion of Judaism.”

In his post, Bougardt described Anderson as “one of the greatest preacher’s alive”. He went on to write: “To all those who follow Pastor Steven he will come to South Africa soon and he will be cutting the ribbon when we open our own church building.

“All is not lost we fighting behind the scenes and you will see him preaching and doing Soul Winning in South Africa in future,” he added.

In May, Bougardt was found guilty of contravening a 2014 court order to end his anti-LGBTQ hate speech, but he avoided a 30-day jail sentence. Judge Lee Bozalek said one of the reasons he suspended the sentence for five years was Bougardt’s commitment to end his association with Anderson.

It’s no surprise that Bougardt has broken his promise to the court about Anderson; he has flagrantly flouted the 2014 agreement and the May ruling by continuing to – almost on a daily basis – make anti-LGBTQ statements on his Facebook page. He has also failed to produce his court ordered apology to the LGBTQ community.

The SAHRC has told Mambaonline that it is consulting with its counsel as to whether Bougardt’s posts contravene the contempt of court order. Almost five month later, it also continues to negotiate with Bougardt to finalise the “apology”.

On 13 September 2016, Minister of Home Affairs Malusi Gigaba banned Anderson as “a prohibited person in South Africa” due to his hate speech. He has also been barred from entering Botswana, Jamaica, the UK and Canada. The preacher has stated that killing gay people would free the world from the AIDS epidemic and praised the Orlando Massacre. He also preaches that governments must execute gay people.

In December 2016, Bougardt visited Anderson in Arizona and promised to buy a building in Eerste River, Cape Town to house a South African branch of Anderson’s Faithful Word Baptist Church. 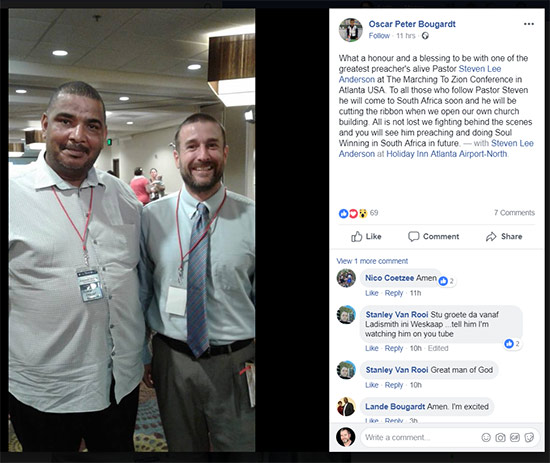