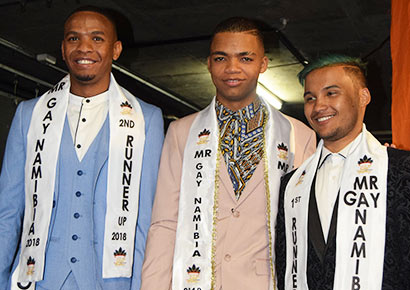 The activist and law student from Mariental was awarded the title at a glamorous ceremony at the Franco Namibian Cultural Centre in Windhoek on 5 October.

Contestants competed on stage in four categories; traditional wear, funky, swimwear and formal. They also answered questions from the judges on issues affecting the LGBTQ community.

“I really did not expect the win as the competition was very high but it is a great feeling to know that you are able to stand firm for what your community believes,” Reinecke told Mambaonline. “I really feel blessed, lucky and overwhelmed.”

Reinecke – who is a programmes manager at the organisation Rights Not Rescue Trust – explained that one of the main reasons he entered the contest was to increase the visibility of the LGBTQ community.

“In Namibia we have lacked role models, most especially as young black gay men,” he said. “It is imperative that a community facing hostile treatment has someone to look up to, someone that could represent the community.”

Reinecke added that he also hopes to use his title to “speak for the voiceless” and “promote inclusivity and participation of the community in decision making.”

The event was organised by former Mr Gay Namibia, Wendelinus Hamutenya. It was last held in 2012 but was relaunched earlier this year.

“The contest was bigger and better than ever,” said Reinecke, who expressed hope that Mr Gay Namibia will continue to take place on an annual basis.

It’s understood that Reinecke aims to represent Namibia at Mr Gay World 2019 in Cape Town, taking place from 28 April to 4 May 2019, although this has yet to be confirmed. The international event was originally set to be held in Hong Kong, but was in August moved to Africa due to a clampdown by the Chinese authorities on LGBTQ affirming events and campaigns.

Under colonial era laws, consensual “sodomy” remains illegal in Namibia and could be used to prosecute gay men, although this is not believed to have happened since the country’s independence in 1990. In May, Namibia’s first LGBTQ community and health centre was launched by Out-Right Namibia (ORN) in Windhoek.