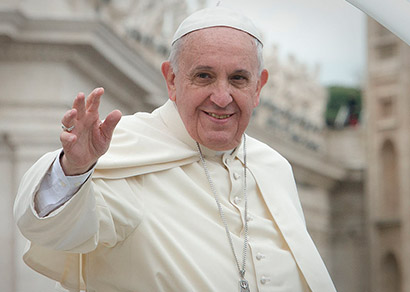 Pope Francis says he’s concerned that priests are in danger of falling victim to the “fashion” of being gay, and that gay clergy should leave the priesthood.

The pope made the comment in an interview published in a book titled The Strength of a Vocation, released in Italy on Saturday and translated into a number of languages.

“The issue of homosexuality is a very serious issue that must be adequately discerned from the beginning with the candidates,” Francis said about those who apply for the priesthood.

“In our societies it even seems that homosexuality is fashionable and that mentality, in some way, also influences the life of the church,” he continued.

The pontiff noted that in some cases, “It can happen that at the time perhaps they didn’t exhibit [homosexuality], but later on it comes out.”

Francis said that, “In consecrated and priestly life, there’s no room for that kind of affection. Therefore, the church recommends that people with that kind of ingrained tendency should not be accepted into the ministry or consecrated life.”

He added: “The ministry or the consecrated life is not his place.”

Francis further urged “homosexual priests, and men and women religious, to live celibacy with integrity, and above all, that they be impeccably responsible, trying to never scandalise either their communities or the faithful holy people of God. It’s better for them to leave the ministry or the consecrated life rather than to live a double life.”

In August, the Vatican had to clarify a comment made by Francis in which he appeared to suggest that homosexuality is a mental illness about which there is “much that psychiatry can do.”

While Pope Francis has shown a willingness for the Catholic Church to be more accepting of gay individuals he has remained steadfastly opposed to the recognition of transgender people, same-sex families and same-sex marriages, describing these in public statements as threats to the family and humanity.

According to official Catholic policy, gay sexuality is defined as “acts of grave depravity”, as “intrinsically disordered” and “contrary to the natural law”.