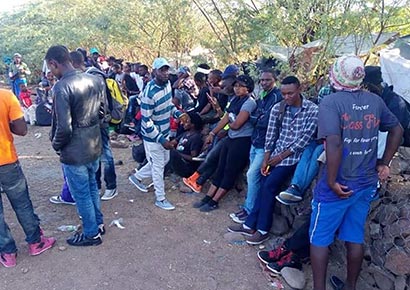 As they prepare to be relocated, the LGBTIQ refugees brutally beaten in Kenya’s Kakuma Refugee Camp have dismissed denials by the UN Refugee Agency, UNHCR, that it was not involved.

The refugees claim they were attacked by the police when they attempted to hold a peaceful demonstration against the ongoing homophobic violence and appalling living conditions they face in the camp.

The refugees, many of whom have fled from Uganda, further claim that the police’s actions on Tuesday were on the orders of the UNHCR, which runs the massive facility.

The organisation has now issued a statement addressing the claims. It said that the during the 11 December demonstration by around 22 LGBTIQ refugees and asylum-seekers, “some violence ensued” and “the Kenyan Police stationed inside the UNHCR compound intervened.”

It’s not clear how the violence started but UNHCR claims that after the police dispersed the crowd, “LGBTI refugees were allowed into the UNHCR compound for their safety and the Kenyan Police called for reinforcement that arrived later to facilitate the transportation of those injured to the medical facilities.” While it condemned the violence it also welcomed “the efforts of the Kenyan Police Force in quelling the disturbance.”

This appears to contradict claims that the police beat the LGBTIQ refugees within the UNHCR compound. One of the victims, Mbaziira Moses, Executive Director of Refugee Flag Kakuma, said that the UNHCR’s statement was “false” and that “you ordered the police to hit us when we ran for rescue inside your compound and some of the UNHCR protection team where happy and taking videos and photos in a mess of our agony.”

UNHCR admitted that the Kakuma camp “does not provide a safe environment for LGBTI refugees and asylum-seekers” and called “on the international community to offer increased places for resettlement, and to accept the urgent and emergency resettlement of LGBTI refugees at highest risk.”

It further stated that the LGBTIQ refugees who were involved in the incident “would be better protected outside Kakuma,” and that “around 21 are currently being moved” to Nairobi and more refugees will be relocated in the coming weeks.

Melanie Nathan, Executive Director of the African Human Rights Coalition (African HRC), said on her blog that it was unfortunate that it took the latest violence and international outrage “for UNHCR to take action.” There were reportedly six separate attacks on the LGBTIQ refugees in the camp in the past few weeks; the most recent the night before the December 11 demonstration. 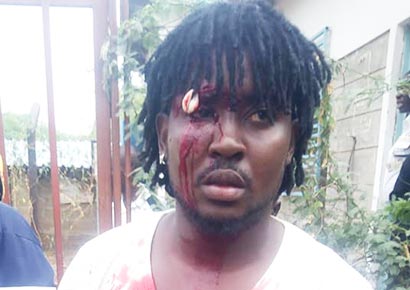 Mbaziira Moses after the beating

“UNHCR cannot pay lip service to this serious situation,” Nathan said. “UNHCR must see this through to a safe house where the refugees are not expected to walk the streets of Nairobi begging and seeking rent and food money. UNHCR must make amends for its part in allowing this to happen.”

Nathan agreed that the international community must also come forward to help resettle these LGBTIQ refugees in countries where they do not face a hostile environment because of their sexual or gender identity.

“There is no safe place unless resettled abroad. For LGBTIQ people the host countries are hostile hosts,” she insisted. “The very persecution which refugees have escaped from their home countries continues in the country that is supposed to host safety and a solution.”

Nathan added: “We the global LGBTIQ family are the ONLY family these refugees have and we must provide our support in an effective and meaningful way.”

Writing on Facebook on Friday, the LGBTIQ refugees confirmed they were in the midst of being moved out of the camp. “We are ready to leave. We are not going back to the camp, we rather die here,” they said. “We are ready to go wherever you think is a safe place for us.”

In June, the refugees held what’s believed to be the world’s first LGBTIQ Pride parade in a refugee camp. The event, however, was marred by violence and death threats from fellow refugees.