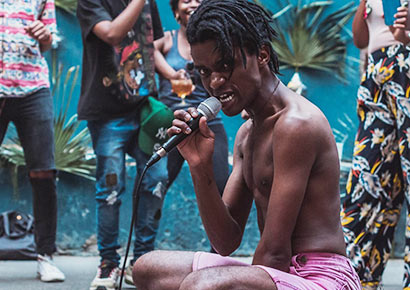 Gyre is a cutting-edge queer rapper who’s challenging the status quo while adding new depth and diversity to the local hip hop scene.

The Johannesburg-based artist (Sbonakaliso Nene) is making an impact with work that he believes speaks to people from all walks of life, because he says, we are all naturally queer.

The 13-track trap album features sex positive songs such as Eat My Ass and Premium Bottom that challenge the heteronormative perspective of the music industry.

MambaOnline had a Q&A with this upcoming performer to find out more about his motivations and his art.

When did you get into hip hop? Was it always something you wanted to go into?

I started rapping in 2015 as an attempt to improve my singing; particularly my breathing. Over time it became clear that that was where my true talents lay and Gyre was born. Never, until the point where I’d made the decision to become a rapper, did I expect to venture into hip hop. In fact, when I started rapping and when I released my debut album, Queernomics, I was still a law student at Wits. So it all came out of the blue. But I’m grateful to hip hop. It really chose me. LOL

As a hip hop artist, what sets your music apart from what’s already out there?

What sets me apart is my ability to make didactic music that, although focused on a queer narrative, speaks to all people from all walks of life. I believe this to be the case because I believe that the world is queer and all other forms of existence are as a result of social conditioning.

What meaning do you think your music carries and what are some of the issues that you address?

My music speaks to issues pertaining to the contemporary black queer (particularly gay, as I am a [gay] man) narrative of post-apartheid South Africa. Unlike the anti-intellectual and shallow discourse on the queer existence that has festered in mainstream media, my music seeks to speak to core issues that are neglected, such as the psyche of sex in queer relationships, to name but one. Our story can no longer be told by disingenuous cis-het counter-parts who in most part fetishise our queerness.

SA is arguably seeing the rise of a number of artists who are embracing their queerness. Do you think this could limit their audience, considering how the music industry and the public are reluctant to change and to open up to new or “different” talent?

I believe that all possibilities are there to manifest. However, what is important for me is that as queer artists we own our narrative. As long as we remain in control, or at least have a degree of control, we dictate the direction of this movement. We have the power as we are the vessels. 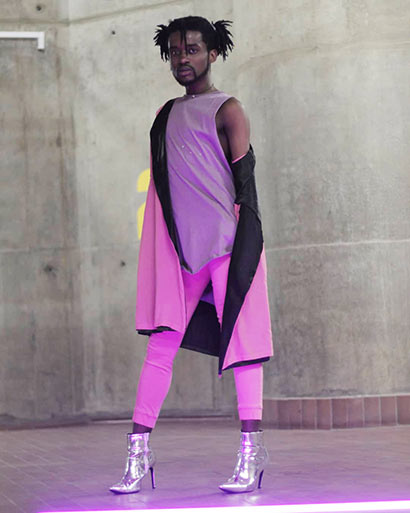 Would you define yourself as a mainstream or alternative hip hop act?

I am what I need to be in that moment. Labels are restricting and my brand seeks to shatter all those pre-conditions. To say I am alternative as a queer musician is to say that queerness and the queer body is alien from the ‘mainstream’ world. To say I am mainstream could be said to be ignorant of the sensitivities of the work I produce. So therefore, I don’t worry about labels. I am the shit. I am legitimate. I do not need cis-het/mainstream media to affirm me. I affirm me. Those who my music resonates with affirm me. That is and always will be enough. Whether I’m sharing a stage with FAKA or fellow queer and “alternative” artists or with AKA and other cis-het artists, I am still Gyre. I am in control of my story and narrative.

A number of young (queer) entertainers who are trying to break into the industry see you as an important symbol and a pioneer who’s using music to disrupt and reconstruct narratives. Do you regard yourself this way?

I am both flattered and admittedly occasionally burdened by such high praise. Flattered because I am grateful to be seen as such an important part of history but equally anchored by the weight that this place in history has. However, I have and continue to use this to liberate me and grow me as person and an artist, as opposed to it instilling fear in me. I am a pioneer but I only pioneer because others do so around me in different forms as well. Whether it’s my queer friend working at an accountancy firm or another at a retail store. Being openly queer is pioneering disruption of the status quo. As I always say, existence is resistance. So I am special in that I am one of the first in the hip hop genre to be breaking these boundaries but I don’t believe myself to be special in that I am the only one capable. In fact, my legacy will be determined by the number of people I inspire to not only match but surpass my feats.

Looking at SA’s entertainment industry, both as a consumer and as someone who produces art for consumption, what would you say needs to change?

Our industry is not an industry, it’s a sector. it needs to be professionalised and rid of corruption (i.e payola). It begins with there being a change in attitudes towards art and artists. My art is as valuable as court cases, merger deals and politicking, etc. The power of art towards enhancing social cohesion is immeasurable yet our financial rewards are so easily and miserly measured. Beyond it being unfair, it is plainly disrespectful because these will be the first people to use our lyrics as catch phrases for campaign slogans and advertisements. LMAO! It’s intellectual theft, but asikho lapho (we won’t talk about that). It’s bullshit.

Do you have aspirations of working with other artists, be it on a local or global level?

Yes, I do but I believe that should come about organically. At the moment I wish to work with FAKA and Nakhane. Both of their music speaks to me. In terms of producers, Muzi would be a dream. Una Rams as well but only after my crush on him ends – we gotta keep it professional! Jokes! LOL. Shembe, Iindirhe, Busiswa and Mykki Blanco, all because their spirit speaks to mine. Those are the first that come to mind.

What would Gyre like to achieve in the next five years in his music career?

As a musician, I would like to release more music. I would love to infiltrate the international market because that’s where the money is at. My reasons for wanting to infiltrate the South African market are purely emotional as I have little to no faith in the integrity of our “industry” but this is home. So, it hurts that I have to be accepted by the Western world before my own people pay attention and recognise not just me but the importance of my work. That is the reality for us queer artists in South Africa. Ang’ngcengi (I don’t beg) but I can’t say it doesn’t hurt. So, in the next five years, I owe it to my heart to dominate the hip hop scene locally so as to inspire other black children to embrace their queerness.