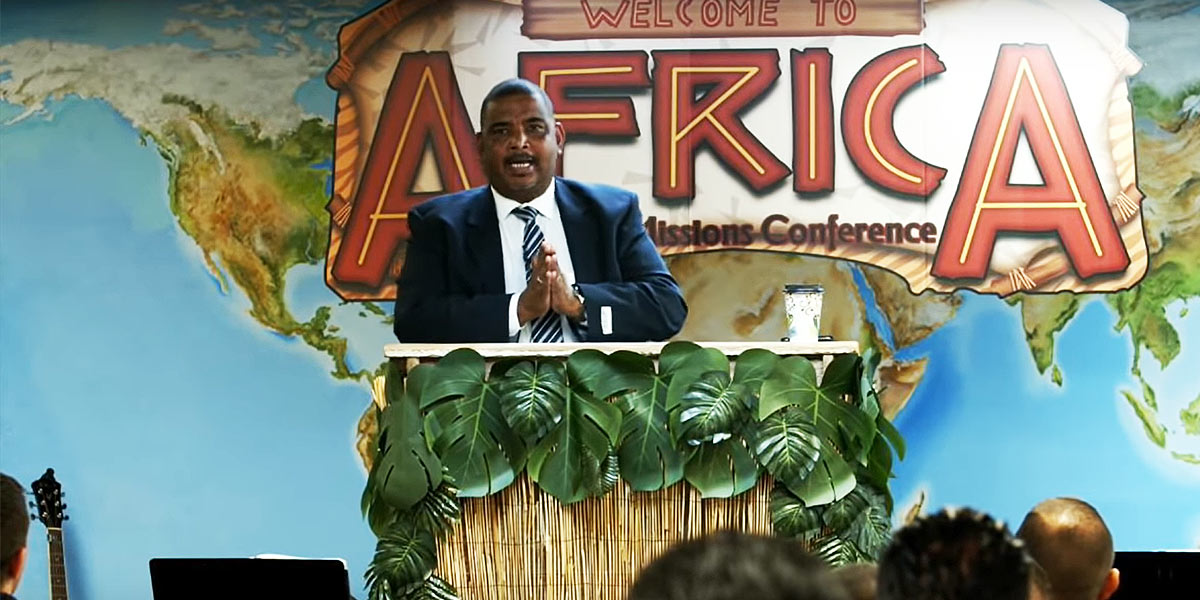 The defiant Cape Town preacher, who is facing hate speech contempt of court charges in South Africa, recently attended the Faithful Word Baptist Church’s “Missions Conference” in Arizona, as a representative from Africa. The Southern Poverty Law Center has listed the American church as a “hate group.”

In the sermon, delivered to a small audience including several young children, Bougardt unrepentantly attacked gay people as ungodly abominations.

The core of his talk was about how “true” Christians will always face persecution because of their beliefs, using himself as a prime example.

Bougardt lamented his life in South Africa because of the backlash against his abusive vitriol, stating that “a bunch of f*gs want me in prison.”

Bougardt said, however, that he welcomes the controversy he’s generated because of his alliance with Anderson – whom he describes as a man of principle – because it helps spread his message. “I became a celebrity because of Pastor Steven, because people want to ear the truth. But government and wicked people want to keep the truth from us.”

The pastor insisted that he would not back down from his anti-LGBTQ stance, stating: “I am going to preach the word of God. If you want to lock me up, too bad, There’s lots of sodomites in jail. I need to preach to them as well.”

Bougardt then railed against mainstream churches for not telling the “truth” about the gospel: “Not the Anglican church because they say it’s alright to be a homo. Not the Catholic Church because most of their priests are a bunch of homos,” he ranted.

Painting himself as a martyr for God, he complained that he’s been oppressed because of his religious views. “I’ve been persecuted by the South African Human Rights Commission and f*ggots trying to stop me from preaching the truth,” he said. He remarked that at one point the state referred him to a gay lawyer, but “how can that f*g represent me in court?” he asked.

Bougardt also claimed that his tyres had been slashed and that he had to change his phone numbers because “homos were calling me”, giving him “a hard time” and asking him to officiate their weddings.

He further revealed that he’d thrown his daughter’s lesbian teacher and her partner out his home because “what you are doing is an abomination”.

Turning to changes to the school curriculum in South Africa that aim to improve tolerance for diverse families and people, Bougardt repeated right-wing Christian hysteria that schools “want to teach children as young as seven and eight what homosexuals are doing in bed”. He asked, “How can my child be tolerant to such a lot of garbage?” adding that, “We should teach our children about the dangers of sex,” instead.

In October, Bougardt was served with court papers for violating the terms of a homophobic hate speech conviction. He was found guilty of hate speech by the Western Cape High Court in May 2018 and was given a 30-day jail sentence, suspended for five years. (It is unclear when the matter will be heard in court.)

This followed years of abuse on social media and in the press against LGBTQ people, including calling for their execution and imprisonment and stating that they are paedophiles targeting young children.

The cleric has not been deterred by the judgement and has continued to make anti-LGBTQ comments on his Facebook page almost daily. He has remained a proud associate of Anderson, who has has been banned from entering over 30 countries, including South Africa, because of his extremist hate speech.