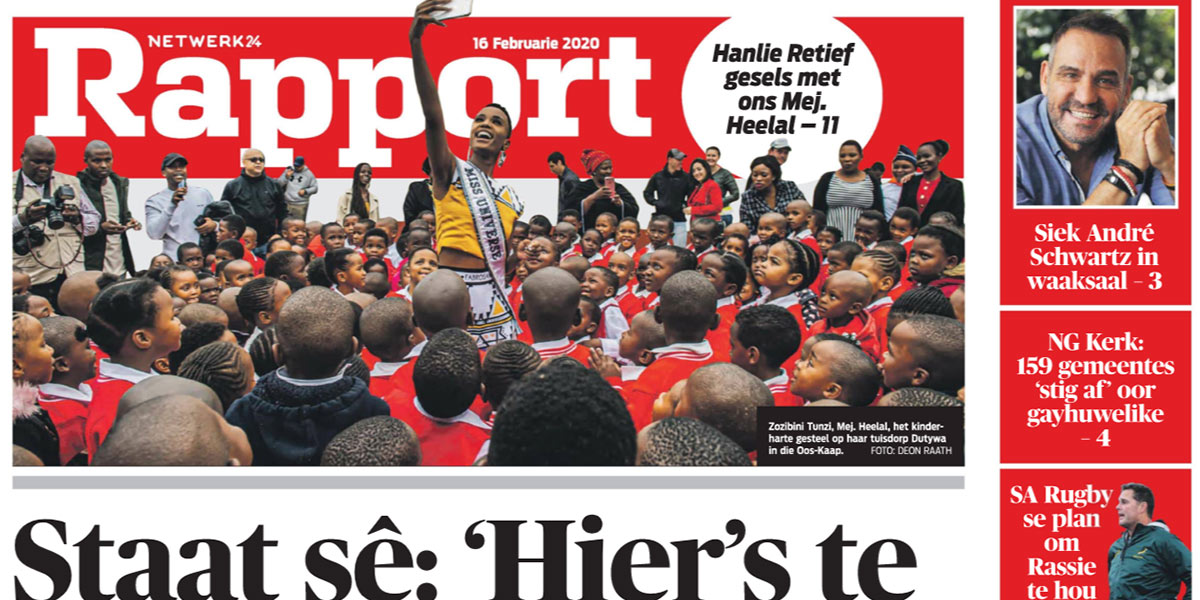 Rapport has been blasted for an article that belittled transgender children as individuals who are confused about their “real” gender.

The piece, published under the headline “Trumpie” in the newspaper and on the Netwerk24 news site on 16 February, concerned Elizabeth Warren, who is vying to become the Democratic Party candidate in the US presidential election.

Last month, Warren said she was so impressed by a question from Jacob Lemay, a transgender boy at an LGBTQ debate in October that she’d consult with him before choosing the Secretary of Education if she is elected president.

Rapport’s Afrikaans article stated (translated): “Hold on to your hat. Elizabeth Warren, the Democrat who thinks she can be a better president than Donald Trump said she will appoint her Education Secretary on the advice of a nine-year-old trans-person – a child who thinks he/she is a different gender than suggested by objective evidence.

“So, as if Trompie didn’t cause enough chaos in the White House, Americans are now considering replacing him with a woman who will take advice from a child who can’t even decide if she is Trompie Toerien or Saartjie Baumann.”

Trompie Toerien and Saartjie Baumann are the male and female protagonists in two different series of Afrikaans youth novels written under different pseudonyms by Mathys Smith in the 1950s.

On Wednesday, the Same Love campaign announced in a statement that it had lodged a complaint with the Press Ombudsman about the article, asserting that the “malicious” remarks “were offensive towards the trans community, factually incorrect and perpetuated incorrect stereotypes” about trans people.

“By publishing this, Rapport / Netwerk24 contributed to furthering a false narrative around trans children and the fact that they choose their gender or that the fact that they are trans is somehow a fashion choice on their side. They also condoned the ridicule and mockery of children who belong to a marginalised community by adults,” said Same Love.

The campaign called on Rapport / Netwerk 24 to apologise and publish an article “on the scientific evidence available on the transgender community and evidence of the discrimination they face in order to correct the harmful misrepresentations they have perpetuated.”

MambaOnline contacted Rapport about the complaint. Editor Waldimar Pelser responded that the newspaper will publish an apology on the weekend.

“The intended target of Sunday’s satirical column was US presidential hopeful Elizabeth Warren. We regret the way in which the 9-year-old child was portrayed and will be publishing an apology on Sunday,” said Pelser.

The Same Love (#samelove) campaign was created by Sasha-Lee Heekes and Megan Watling, the engaged same-sex couple who were recently turned away by the Beloftebos wedding venue in Stanford.