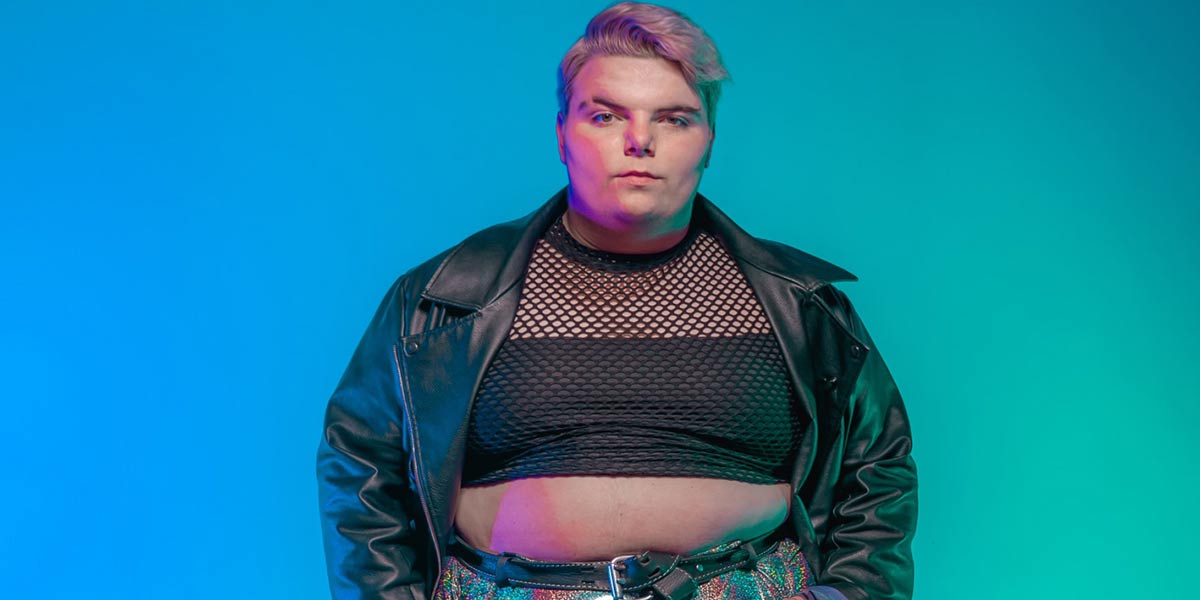 Yahto Kraft blew viewers away on The Voice South Africa with his powerhouse vocals and queer realness. He talks to MambaOnline about reaching for stardom, body positivity and the heartbreak that fuelled his standout track, Ugly.

Nineteen-year-old Yahto has a love for performing and writing music while aiming to be “a light for those in the darkness”. He first came to our attention as one of the top 6 contestants on Season 3 of The Voice South Africa, with diva songbird Lira as his coach. The Johannesburg-based Yahto presented himself as an unashamedly queer talent, subverting norms about sexuality, gender and body image.

He recently released the lyric video for his inspiring first single Ugly, which has its roots in real-life heartbreak and rejection: When he was 16, Yahto was elated after he finally kissed a boy who’d’ been his long-time crush. He hoped to repeat and build on that moment the following weekend, but it was not to be.

“When I tried to kiss him again, he just looked at me and said: ‘Dude, I was desperate and gone, you’re not my type, you’re fat and ugly’,” Yahto reveals. “Needless to say, my little heart was shattered. I went home and put my feelings into words. Thus, Ugly was born.”

MambaOnline caught up with the charismatic rising star whose talent as both a singer and lyricist cannot be denied.

Hi Yahto, how has the lockdown been for you? Are you coping and how have you been occupying yourself?

Hi there! Lockdown is okay. I’ve been working a lot, writing a lot and just trying to stay busy. I’ve been watching many a series and following all of the incredible projects everyone has been doing all over the web. I’ve also been meditating and keeping myself centred. I just really miss being with my friends and hugging them!

What kind of music have you been listening to in lockdown?

I’ve been listening to some throwbacks and having dance parties in my room by myself! A lot of Spice Girls, Fleetwood Mac, Robyn and Blink 182…

Tell us about your name – is it a stage name and what is its origin or background?

My name is actually Yahto, birth certificate and everything! It means blue in Native American. My mother wanted to name me Blue to signify that my dreams can reach the highest of the skies and the lowest of the oceans but my dad refused. So they settled on the same meaning in another language.

When it comes to your sexuality and/or gender, how do you identify?

I identify as queer! Gender is such a wide spectrum and I love playing around with it. I love challenging people’s preconceived notions of gender norms.

What about your coming out? How old were you and what kind of reaction did you get?

I’m very lucky that my coming out story is a positive one. I was never really in the closet, so coming out was never a thing for me. I did, however, tell my mom when I was 15, on my way home from a party. She just looked at me and said: “Sweetie, I know. You were strutting around in my heels and a tablecloth when you were six, and it’s okay!”

Your voice is remarkable. When did you realise that you could sing?

Thank you. I have been training classically since I was eight years old! I’ve never thought my voice was good despite what people keep telling me. I am very insecure about it. I work hard to make it feel good, so it can sound good. I love connecting with people through my voice; making them feel something.

Tell us about your musical influences. What artists have inspired you?

Kacey Musgraves, Dolly Parton, Harry Styles, Fleetwood Mac, Lady Gaga, Queen, The Darkness, David Bowie and Elton John. These artists are all inspirations to me, as they are all unapologetically themselves in their music, style and how they carry themselves.

How has your life changed since you took part in The Voice? And what was it like working with the one and only Lira?

Lira taught me how to be a diva and get what I want. She was the sweetest person I’ve ever met. My first week at live rounds I was panic-central, and she just stopped everything, came backstage, gave me the biggest hug and said, “We both know you can do this, so do this.” The Voice SA shoved me into the public eye and grew my audience in a major way. It allowed people who usually wouldn’t so much as look at me to listen to me and for that, I am eternally grateful.

I love that you were so open about who you are on The Voice. Where did you get the courage and confidence at such a young age to live your truth in the public spotlight?

I was lucky enough to grow up in a house where everything I thought was celebrated, so I never really had that doubt about who I am as a person. It was an extremely supportive household and I just took that with me throughout my life. 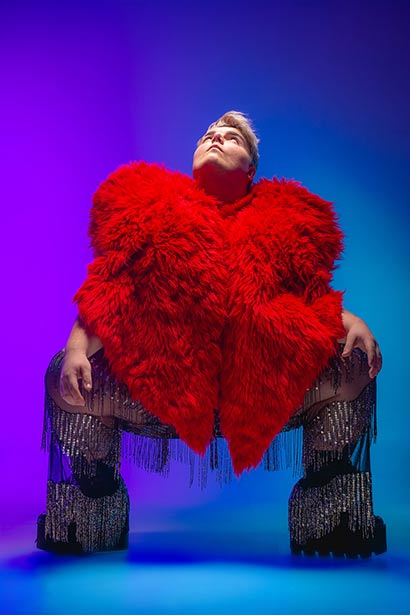 Do you think that being openly queer has limited or been a hurdle for your music career?

Being very open about my ideals and opinions hasn’t necessarily hindered my career, but it has opened up the conversation about what it means to be LGBTQ in the industry. It’s been incredible to see people’s reaction to me.

What drives you as a musician and artist? What kind of impact do you want to have on the world?

Let’s talk about your incredible song, Ugly. What kind of response have you’ve had? Have people connected to it?

The song is doing so well and the feedback has been super positive. I’ve received a bunch of messages from people saying how much it’s helped them deal with their bodies and difficult situations they have been through. That’s exactly what I wanted the song to be; a way for people to deal with their experiences. So I would call that an absolute success!

Do you remember when you first realised that you did not fit into what the world tells us is the idealised version of ‘beautiful?

I don’t remember specifics; I do remember not fitting in with my friends at school when I was very, very young. All of my friends have always been skinny, model types, and I’ve never felt like I belonged, yet we were all so close. It took me a while to realise that looks and personality are very, very different facets of a person. It’s about the heart, not the face, and I slowly grasped that through school.

Have you ever been told or felt that you didn’t have the right “look” to be a music artist?

I have never felt out of place in the industry, with incredibly successful artists like Lizzo being body positive. Yet I still get told – by people who are not in the industry – how to look and what to wear to be successful. I still get told, almost daily, that to be successful you need to be skinny, conventionally attractive and straight, but we are turning that idea completely on its head! 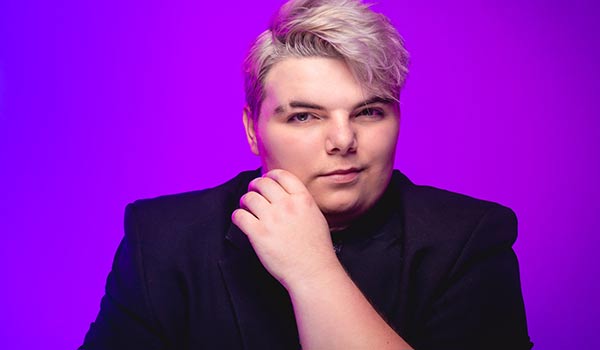 It’s often said that the LGBTQ community – especially when it comes to gay men – is obsessed about looks and buff body stereotypes.

Unfortunately, it is true. Our community can be extremely supportive, but some parts of the community are very selective about who they support. Our generation is changing that, but we still have a long road to walk before we get there…

I don’t need you. Never have, never will. I allowed you to break my heart but, thanks to you, I won’t allow anyone to treat me that way again. I should say thank you! You inspired me to write my first single out of that first heartbreak. Thank you for almost killing me but I am stronger now because of it.

You also create some of your outrageous and gender-bending costumes. What role do they play in your stage persona?

My outfits on stage are what I feel inside! They play a huge role in my stage performance because I am such a visual person. When I write music, I immediately visualise the visual that goes along with it, be it an outfit or a music video storyline. I just picture it in my mind. I express the outer to match the inner, in whatever way, shape or form.

What message would you give to other young queer people who feel like they don’t fit in or won’t ever fit in and be accepted?

Don’t mind what others are saying about you. You are incredible. You are more than a star, you’re a supernova! Don’t let anyone dull how bright you shine. You are you, and that is more than enough!