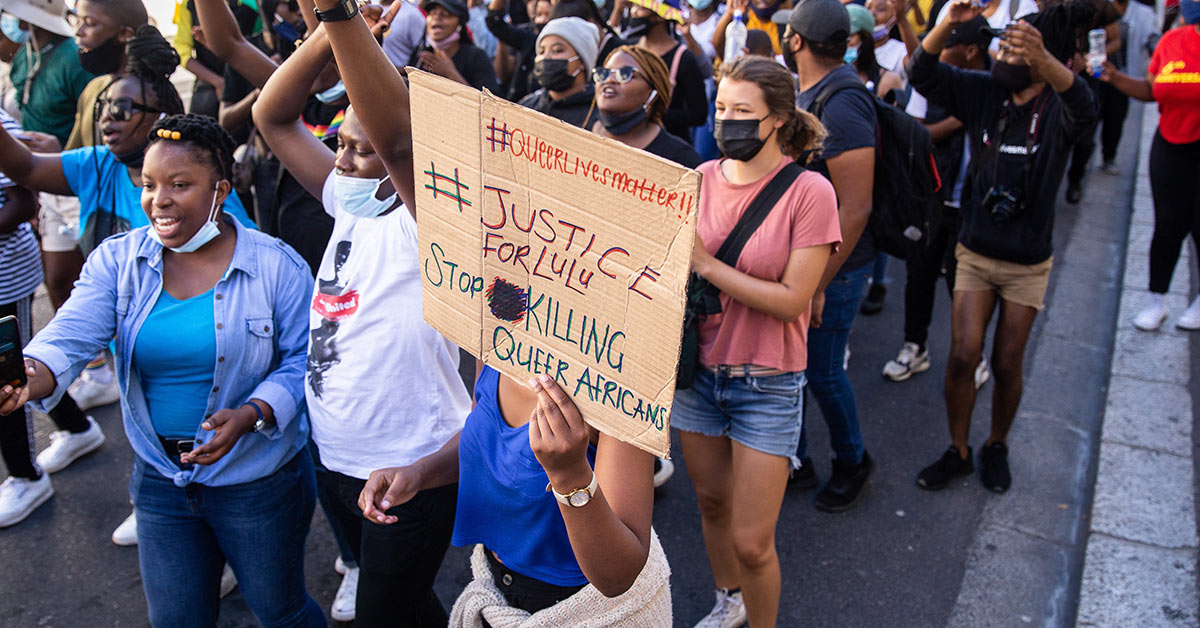 Dozens of people march through the streets of Cape Town to Parliament to demand justice for Andile ‘Lulu’ Ntuthela, a gay man who was murdered in the Eastern Cape in what is believed to have been a hate crime. (Pic: Asharf Hendricks)

The group marched to Parliament on Friday calling for the Prevention and Combating of Hate Crimes and Hate Speech Bill to be fast tracked.

About 100 people marched to Parliament on Friday, calling for justice after the murder of Andile ‘Lulu’ Ntuthela.

Protesters held up placards saying: “I’m sorry that we couldn’t protect you” and “Justice for Lulu”. Ntuthela’s body was found in a shallow grave days after he was reported missing. The body was on the property of Luvuyo Jonas, who is currently in custody for the murder in the Eastern Cape. It is believed Ntuthela was murdered because he was gay.

A statement by Iranti, an organisation that campaigns for gay and lesbian rights, states that Ntuthela’s murder follows a number of other recent murders which include Sphamandla Khoza, a gay man from Durban. Nathaniel Mbele in the Vaal area and Nonhlanhla Kunene from Pietermaritzburg who was lesbian.

Sibusiso Kheswa from Iranti said that they were “angered by the attacks on LGBTI people”. Kheswa said that the government must ensure justice is served. Kheswa said that many cases have been closed by the police and National Prosecuting Authority without thorough investigations which gives the impression that “LGBTI lives don’t matter”.

Outside Parliament protesters stood in a circle singing while holding candles and flowers, as they mourned Ntuthela.

Entertainer and activist Soli Philander, who spoke during the vigil, said that all people seek to do is live their purpose “and we get murdered for it”. Philander said that was “the worst possible thing that can happen to a human being in the era of our freedom, of our democracy”.

Kamza Gwana of the ‘Justice for Lulu’ movement said, “We seek justice for the brutal murder of queer bodies in this country. Queer bodies do not walk and live freely, they live in a hetro-patriarchal society.”

Mabuti Mkangeli of the Triangle Project said queer people died every day “because of their sexuality”. Mkangeli said that there was often little to no support from families, police, or government.

Provincial Secretary of the ANC Ronalda Nalumango received and signed the memorandum handed over by the group. She agreed that there should be no bail for perpetrators of crime against the queer community.

Demands in the group’s memo included that Parliament fast track the Prevention and Combating of Hate Crimes and Hate Speech Bill.

Protesters said that they would return if their demands are not met.

This article was written by Asharf Hendricks and was first published by GroundUp.