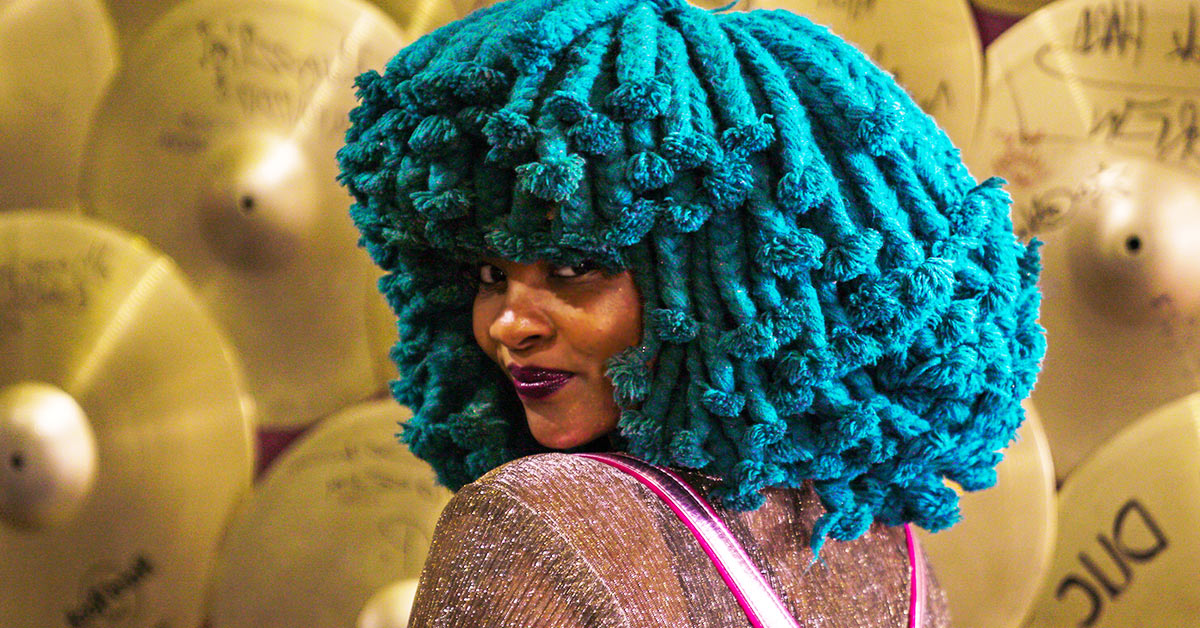 Moonchild Sanelly: “I don’t consciously decide whether I want to date men or women.”

With her signature blue hair and sexually empowering persona, Moonchild Sanelly is one of the most distinctive music artists on the continent. And, at the end of 2020, the gqom star revealed that she is dating a woman.

The Gqeberha-born Sanelly launched her career performing in Durban. Moving to Joburg, she started to take on the rest of South Africa (and the world) with her “future ghetto punk” sound; fusing elements of electronic, afro-punk, pop, kwaito, hip hop and jazz.

Sanelly has since performed at festivals around the globe and in 2019 was famously featured on the track My Power, on Beyonce’s critically acclaimed album Black is King. Former Blur frontman Damon Albarn has described her as “a global superstar waiting to happen”.

A mom to three daughters, Sanelly recently brought her personal life into the spotlight with a 10-part MTV Africa reality show. Her fans – known as “boo beams” – and the wider public have now gotten to see her as a parent, an artist, a creative and a girlfriend.

Moonchild Sanelly – who’s proclaimed herself “the president of female orgasm” – spoke to MambaOnline about her sexuality, her fearlessness and her connection to the queer community.

When it comes to your sexuality, how do you identify?

I would describe myself as a person. And I identify as a girl; her or she.

How has your sexuality or sexual identity evolved or have you always been aware of your queerness?

I don’t know about evolving but I know that I have played around. This is something that has existed in my music and in my existence. So if you have to read between the lines you would have an idea that I am queer. It is, however, my first time dating a woman. But I don’t consciously decide whether I want to date men or women. This is me being a person, exploring their sexuality.

Was there ever a “coming out” to family and friends for you?

I have never had to explain how I live to anyone. So there’s no coming out of anything for me. I’m just myself and you just adjust, because if you don’t, you are not going to stop me from living my life. That comes from me not caring about people’s opinions of me because if I am happy, that is the priority. Coming out for anyone to be pleased, happy or comfortable is not my burden. I don’t even think about it because I just live my life.

Tell us about your partner. What drew you to her – why her?

My partner is awesome. What drew me to her was she really fly and I didn’t know much about her. I flirted with her and we are still together. She had great energy, she looked hot, she had a vibe and attitude and I found that very attractive.

How important is sex in a relationship for you?

Sex is very important. There are so many different types of sex that people can engage in when they are together, and we all have our different preferences. That’s why I am always stressing [how important it is that] people vocalise and communicate how they want to have sex.

What are your thoughts about consensual non-monogamous relationships? Is that something that appeals to you?

People have their own rules, their own relationships and their own comforts. It’s what you discuss with your partner if you even discuss it. It’s about communication as to whether you are willing to or not. I know that permanency comes with some boredom, that’s why people cheat. And if you have better communication that wouldn’t happen. So, a shoutout to those who are secure enough in open relationships to just make it even more interesting. It’s something that requires that both parties be very secure. I am pretty much chilled.

You’ve spoken about opening an adult club and launching a line of sex toys? Why do these things appeal to you?

The reason I always say I’m going to open a sex club – and I still will – is that I [would like to offer] security and confidence where people don’t care about their shapes, their sizes and people don’t get violated because they’re walking around naked. I just want to create a safe space for my community. I stand for sex liberation and it’s only natural really.

When it comes to sex and sexuality, what are we getting wrong in SA?

The word sex is already taboo because religion fears it, as do parents. Teachers can teach about sexual anatomy but in songs, we can’t talk about it because it’s bleeped. I feel like it’s in every belief that people fear sex and therefore don’t talk about and it’s something that happens behind closed doors. We just don’t ever have the conversation and it’s hard to talk about sexuality if you can’t even talk about sex.

You’ve described yourself as fearless. Where does that fearlessness come from?

I come from a mother who taught me to never follow but to always lead. I come from a parent who made me feel fine with being different in my community and also created the platforms for me to be able to express myself. So fearlessness is something that I just had as a kid. I believe fear is a concept created by adults who limit themselves and I have always lived in my own bubble and basically, I remain childlike. The world exists, but I am living in my own world.

How connected do you feel to the queer community?

African women who are upfront about their queer sexuality often face pushback. Have you experienced this as an artist and if so, in what ways?

I am a woman in South Africa who is going through lifetime trauma, like normal South Africans. It’s like breathing. The difference is I have chosen to make this my power. And no one has time for tears. Tears don’t make you money, and you can’t burden yourself while you grow. It’s the choices that I have made and any circumstance that I have been handed I have chosen the path that will help me succeed and enable me to name, shame and inspire. I am creating a space where I remind women that their voices matter. 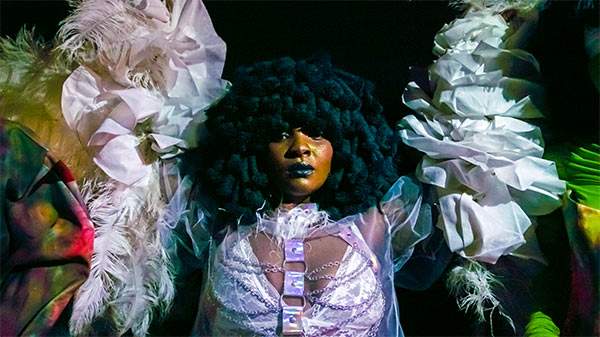 Moonchild Sanelly: “I am inspired by liberation.”

When it comes to being so open about your power and sexuality as an artist, who inspired, influenced or led the way for you?

I am magical and free to do and be whoever I want and I represent everything that has never been represented for me. I grew up listening to the likes of Brenda Fassie and there were indirect messages in those songs that I didn’t know the meaning to. She was vocal and not scared to say what she wanted to say so that was amazing. Another thing that inspired me is that when I wasn’t feeling safe at home I needed a song on the radio that made me feel fine. I am being the person that I needed to listen to when I was a kid. I am inspired by liberation and reminding people to have a voice. My platform is forever going to be about empowerment, whether it’s forgetting your problems or singing them away, or laughing at them. I am always going to encourage people to own it and live life to the fullest.

You’ve heard about the recent spate of queer murders across the country. Do you think queer artists and allies should be speaking out about this?

Indeed. I feel like people have the right to speak on whatever they want to speak on. For me, I speak on pussy politics because that is my chosen politics. The murders are horrible and should be condemned, however, people shouldn’t be attacked for not speaking out.

Like so many out there in Mzanzi, you’re a survivor of gender-based violence. What helped you not only survive but thrive?

I got this book called The Artist’s Way and it just helped me focus and chase my dreams even harder and leave the situation I was in. I bumped into more situations but because I knew my power, my dreams and where I was going I was able to overcome them. Also bear in mind that for me it sounds like such a simple decision but I have realised that we don’t have the same backgrounds. My mom was such a free person growing up for me to be able to think the way that I do. I know that it doesn’t come easy, but I do feel it’s always great to tell a friend or have a friend that knows. No one can force you to leave that situation but if you share it so that if anything happens to you someone can support you. If you are not strong enough to leave on your own, share it with someone so you have that strength.

What’s the reality of reality TV been like for you? What has surprised you about being in a reality TV show? And will you do it again?

The show has been really awesome. What surprised me though is that it became so draining when going into deeper situations that I had not dealt with. But overall, the production was really exciting and sharing my story was empowering. I would definitely do it again.

Tell us something wild about yourself we’d never know?

I am a fashion designer; that’s what I actually went to school for.

The final episode of Moonchild Sanelly WOZA airs on MTV Africa (DStv Channel 130) on Monday 17 May at 21:30 CAT.