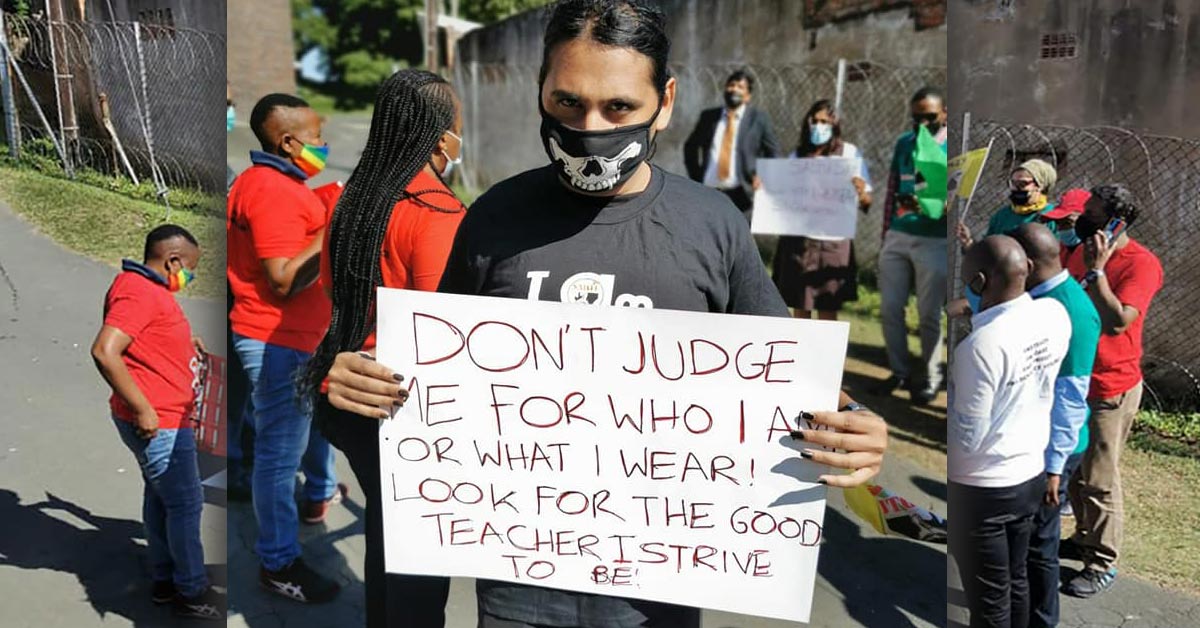 Bi-gender teacher Serbash Thumbadoo says they were shamed by their principal for wearing a skirt (Photo: SADTU/Facebook)

The principal of a KZN school has publicly apologised for his queerphobic response to a bi-gender teacher coming to work in a skirt.

Mathematics and life sciences teacher Serbash Thumbadoo, 29, who identifies as bi-gender, has worked at Centenary Secondary School in Durban for two years.

They recently came out about their gender identity to their boss, Principal Douglas Gounden, who seemed to initially be accepting. However, Thumbadoo says that when they came to work in a skirt, black stockings and flat ankle boots on 21 May, the principal was far less supportive.

“…While I was standing outside the office administration block, the principal saw me and asked what I was wearing. I responded, asking ‘why?’ He then said he did not want the school to be a laughing stock and what I was wearing was a joke,” Thumbadoo told The Post.

Thumbadoo also says that the principal took a mobile phone picture of them and said he planned to send it to the school’s circuit manager and Thumbadoo’s union representative.

“I was hurt. I walked to my car and changed into a pair of pants. I just broke down and began to cry. I felt victimised and discriminated against. I felt like I was not allowed to be who I really was,” said the teacher, who added that the incident had affected some of their classes.

A few days later, Thumbadoo, along with members of the South African Democratic Teachers Union (SADTU) and the LGBTIQ community staged a protest at the school against the principal’s discriminatory conduct.

Thumbadoo held up a placard stating: “Don’t judge me for who I am or what I wear! Look for the good teacher I strive to be.”

Gounden added that he had since met with Thumbadoo. “I did apologise to him for my action. He has accepted my apology.” He also called on his staff to accept people’s differences, to educate themselves and not to discriminate against others – and to spread this message to their learners. “Change the way you think,” he urged.

Thumbadoo told The Springfield Weekly Gazette that they had indeed accepted the principal’s apology and things were back to normal at the school. Thumbadoo added that they hoped the incident would serve as an example to others to embrace diversity and inclusion.