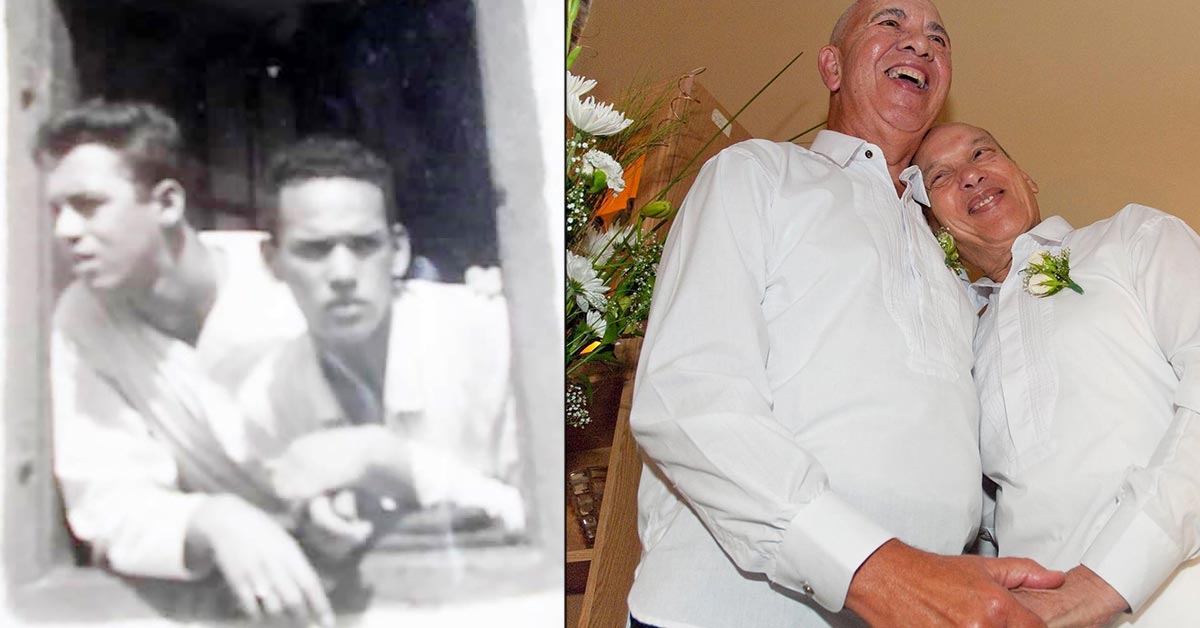 Walter Sassman and Gerry Dagnin and their enduring decades-long love story were honoured at a moving memorial service in Cape Town.

The much-loved couple, who faced both the indignities of apartheid and the criminalisation of their love for much of their lives, were together for an astonishing 64 years.

Gerry was originally from Bloemhof Flats in District Six while Walter grew up in Rondebosch and later moved to Walmer Estate.

After meeting at a New Year’s Eve party in 1957, they became inseparable, officially tying the knot in 2010 when they were both in their 70s. Gerry worked as an accounting clerk and Walter was a retail manager, ultimately retiring from the Markham clothing retailer.

The couple were devout Anglicans but their relationship was never acknowledged by the church.

In 2016, Gerry told the Mail & Guardian that it “would mean the world to us” to have their marriage blessed in an Anglican church. “We would like it to happen in our lifetime, yes. But, you know, we’ll leave that decision in God’s hands.”

It’s a wish they never lived to see fulfilled.

In June last year, Walter and Gerry were admitted into hospital with Covid. Walter passed away on 24 June at the age of 85; separating the couple for the first time in six decades. Nurses brought them together to say a touching final goodbye in the hospital.

“Gerry described the look in Walter’s eyes and their last goodbye as a beautiful one. They both knew,” said Sharon Cox from Triangle Project.

The frail Gerry was discharged from the hospital and was taken in by members of the LGBTIQ+ community, including Cox. Friends and neighbours all helped in his care, providing meals and other support. A year later, Gerry also passed away on 4 June at the age of 86.

On Saturday, loved ones gathered at Christ Church Constantia in Cape Town and online for a moving memorial to celebrate their lives. Stories about Walter and Gerry were shared and their favourite songs were played.

“They both loved the opera and music was a large part of their lives. The pieces played were carefully picked for each of them and incorporated into the celebration of their lives, instead of hymns. The tributes were a reflection of them and who they were as individuals, a couple and as friends,” said Cox.

Theirs was a long and well-lived life and a true and unique gay love story.

“It is a testament to their faith and to their persons that they didn’t turn into twisted, angry [people], filled with evil and hatred… considering how they, and others like them, were treated in this country, which claimed to be Christian, for so many years,” remarked Father Terry Lester, who officiated the couple’s memorial.

“You were both role models to us all on how to maintain a happy, healthy, loving relationship,” said Mike Viveiros, a friend of many years, who noted that “they have been together longer than I have been alive.”

Close friend Malcolm Stellenboom described Walter as “always the great fun, always in the kitchen telling a multitude of entertaining stories of their youth and how they met.” Gerry was “always the creative photographer… with “a deep love of fine music.”

Cox remembered the monthly get-togethers, called ‘Tea with Dorothy’, attended by the couple. “It was years ago and it got its name from a time when gay men’s relationships were criminalised, and so in order to establish whether another person was gay, the question was asked ‘Are you a friend of Dorothy?’ There were around nine gay men in the group – all over the age of 60 in those days – and it was pure joy.”

Cox told MambaOnline that the couple’s last years highlighted the struggles of older LGBTIQ+ people. “Ageing is a reality that many of us often don’t give too much thought to. Although there are LGBTIQ+ people who have supportive families and many that have children, there are others that do not have children or have family who have their own lives, children and grandchildren,” said Cox.

“It is important that people who are ageing or those who know someone who is getting to the stage where it is evident that care is needed, that a care plan is put in place.”

Cox added: “It is not always easy to walk alongside someone in the last lap of their journey, but it is a privilege. There will come a day when it is our turn and we can only hope that we will have a circle of care to be there for us, and to have them walk alongside us on our final lap.”

Thankfully, Walter and Gerry were surrounded by a warm LGBTIQ+ family and caring neighbours in their last days – a testament to the importance and value of building and sustaining community. Theirs was a long and well-lived life, filled with joy and friendship; and a true and unique gay love story.

Walter and Gerry’s ashes were interred in the garden of remembrance at the church following their memorial.