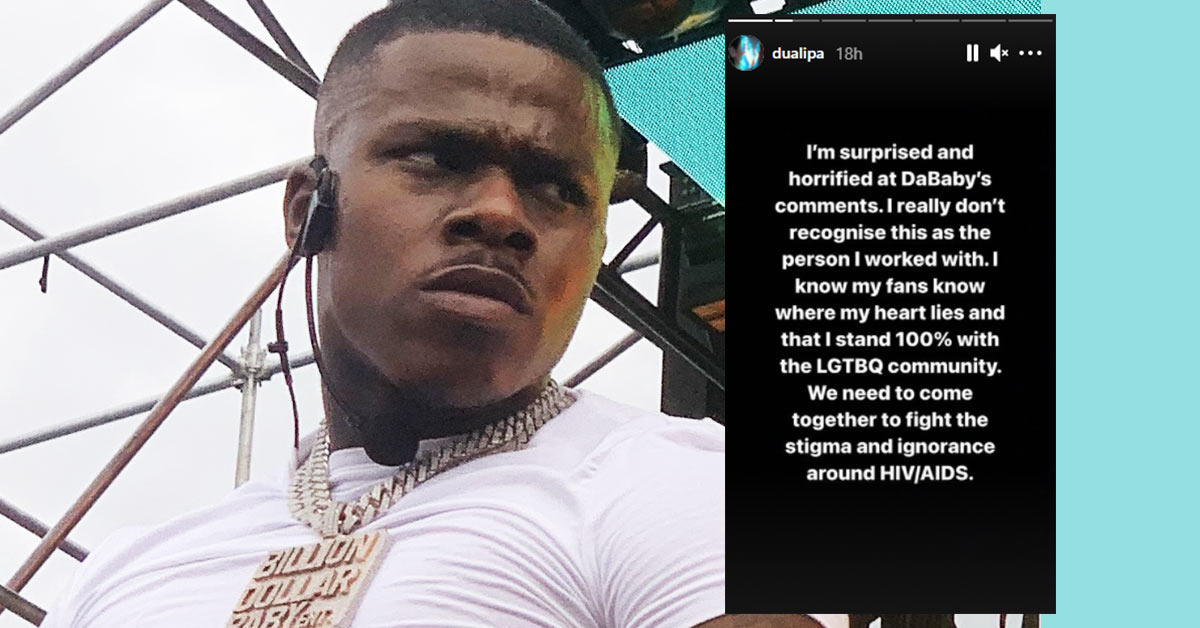 During a performance at the Rolling Loud festival in Miami on Sunday night, DaBaby told the crowd: “If you didn’t show up today with HIV, AIDS, or any of them deadly sexually transmitted diseases that’ll make you die in two to three weeks, then put your cellphone lighter up.”

He then went on to say: “Fellas, if you ain’t sucking dick in the parking lot, put your cellphone lighter up!”

Reacting to a backlash on social media about the comments, DaBaby later apologised – at least for his first statement.

“Anybody who done ever been effected by AIDS/HIV y’all got the right to be upset, what I said was insensitive even though I have no intentions on offending anybody. So my apologies,” he tweeted to his 4.1 million followers.

As for his homophobia, DaBaby said: “But the LGBT community… I ain’t trippin on y’all, do you. y’all business is y’all business.”

English singer Dua Lipa, who collaborated with the rapper on a remix of her hit Levitating, said she was “surprised and horrified” by the comments.

“I really don’t recognise this as the person I worked with,” she posted in an Instagram story. She added that “I stand 100% with the LGBTQ community” and that “we need to come together to fight the stigma and ignorance around HIV/AIDS.”

Engage Men’s Health, a South African initiative that provides free HIV and STI services to men who have sex with men, described DaBaby’s comments as “homophobic, dangerous and stigmatising.”

It tweeted: “Today, medication, known as ARVs, successfully controls HIV; making it a medically manageable condition. People with HIV who are on treatment can live long, full and healthy lives.”

Also on Twitter, singer and long-time HIV activist Elton John commented that DaBaby was spreading “misinformation” and that this “is the opposite of what our world needs to fight the AIDS epidemic.”

He added: “Homophobic and HIV mistruths have no place in our society and industry and as musicians, we must spread compassion and love for the most marginalised people in our communities.”

A recent UNAIDs report found that people living with HIV around the world “still regularly face multiple and intersecting forms of stigma and discrimination” that “undermine their health, safety and dignity and impede efforts to end AIDS.”

We’re appalled by US rapper DaBaby’s comments. They’re homophobic, dangerous and stigmatising. Today, medication, known as ARVs, successfully controls HIV; making it a medically manageable condition. People with HIV who are on treatment can live long, full and healthy lives.

(1/5) We’ve been shocked to read about the HIV misinformation and homophobic statements made at a recent DaBaby show. This fuels stigma and discrimination and is the opposite of what our world needs to fight the AIDS epidemic.