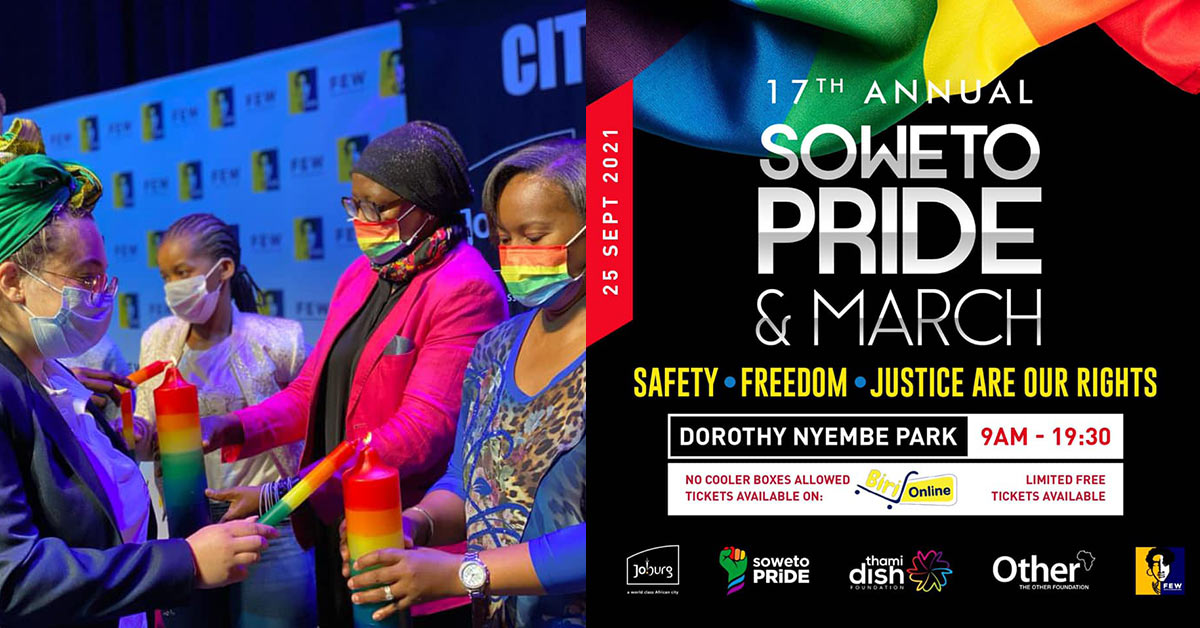 The launch of Soweto Pride included a candle-lighting ceremony to honour LGBTQI+ people who have lost their lives.

Tickets to this year’s Soweto Pride have sold out days after it was announced that the event would be held with the support of the City of Joburg.

Hosted by the Forum for Empowerment of Women (FEW) since 2004, Soweto Pride provides an annual safe space for LGBTQI+ people to exercise their freedom and become visible within the community.

The 2021 event was officially launched in partnership with the city at a live-streamed event at the Joburg Theatre on 9 September.

She said that “The city is committed to building a Johannesburg that is inclusive and protects the rights of the LGBTQI+ community.”

The 17th annual Soweto Pride will take place on Saturday 25 September at Dorothy Nyembe Park, under the theme of “Safety, justice, freedom are our rights.”

Acting Director of FEW, Nomfundo Ndaba, welcomed the partnership with the City Of Joburg. Ndaba said this reflected the city’s commitment to “addressing the discrimination of LGBTQI+ and reducing the number of violent killings”.

Ndaba added that it is also an opportunity for FEW to help educate the public and stakeholders about sexual and gender matters.

“We will be marching to reclaim our streets, we will be raising awareness by chanting, dancing and singing for our communities to know we exist,” said the organisers on Facebook.

“We will be celebrating our queer identities as well as honouring lives lost due to hate crime and suicide. Safety, justice, freedom are our rights,” they added.

The day will include a march in the morning, followed by speeches, statements of solidarity and entertainment from queer and allied artists. The DJ lineup includes The Musikal Frik, DJ Khekhe, Les G, DJ Biskit, DJ Puggy and DJ Mkhonto.

Due to lockdown restrictions, however, only 500 tickets were released online. By Monday night, all the tickets were sold out, disappointing many in the community. The organisers have confirmed that no further tickets will be available online or at the gate on the day.

Soweto Pride will also host a free full-day film festival in partnership with Kasi2Kasi Queer Cinema on 24 February at the Soweto Theatre. For more details visit the FEW Facebook page.