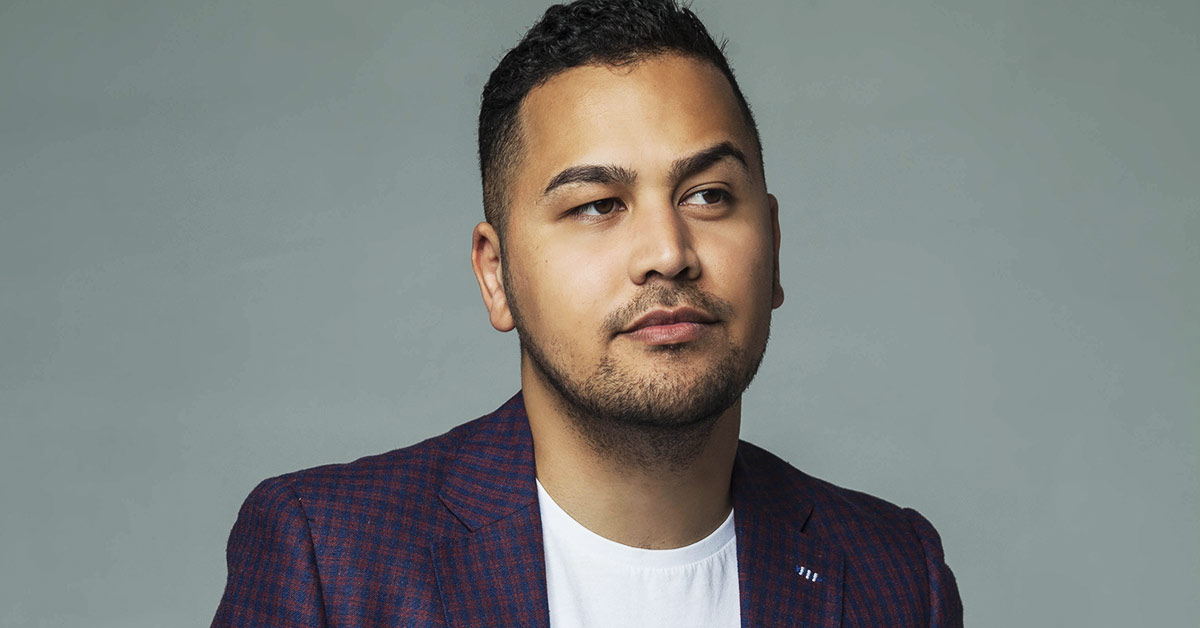 Skeef: Wat jy van LGBTIQ-wees wil weet is a new addition to the South African literary landscape, and the book has been making waves in the Afrikaans-speaking queer community since its release on 1 September.

This “how-to guide” to being gay is the first of its kind, and aims to inform and enrich the dialogue about being gay within Afrikaans communities.

Radio DJ, media personality and the author of the book, Renaldo Schwarp, gives us his take on creating queer content and living authentically.

What has the reception of the book been like thus far, and what do you hope it achieves?

It’s been amazing. In its first week, the book debuted at the number 2 spot for all Afrikaans books and in the top 15 for ALL South African books. It’s been charting on the Nielsen BookScan top sellers list since.

I want to say I’m surprised, but proud is perhaps a better word to use. To see this labour of love step out of the closet with so much flare warms my heart.

It’s about time that projects that centre narratives on queer local experiences take up space in the mainstream. I’m hopeful that this book even further highlights our stories in an attempt to destigmatise our existence.

You have said that you wrote Skeef for a younger Renaldo, answering questions that you might have had as a teenager. While a lot of the book centres on seminal experiences for LGBTQI+ people – like coming out – it is certainly not only aimed at young people. Who else do you think might benefit from reading Skeef?

On its most basic level, Skeef is a book about people and their experiences. How we navigate life, love, and everything else in between. While the book becomes a crucial resource for young queer people, it is (if not more) valuable/meaningful for people outside of the LGBTIQ+ umbrella – parents, especially.

Also, our allies, people who want to know more about who we are and the struggles we often face.

I even want to go so far as to say that I hope my book will be read by the bullies and those who discriminate. Hopefully this book shows them what it is like being on the receiving end of their hate.

Skeef was written with an Afrikaans-speaking reader in mind, which means that the book addresses very specific types of “baggage”. Why do you think it is important to talk about issues surrounding gender and sexuality within specific cultural contexts, as you have done with your book?

‘Write what you know’ is a mantra that shaped the creation process of this book.

There is still a massive amount of work to be done for the ‘acceptance’ and celebration of queer people in our Afrikaans communities.

I’m gay, brown and Afrikaans. These three definitive words stand core to my identity and the lens through which I experience the world – this is where I feel most comfortable writing from.

My gay identity cannot be removed from my Afrikaans identity. These are intertwined, and will be forever.

Skeef uses a lot of my personal experiences as a roadmap for the issues I dissect, which is why it was important for this book to be written within this conservative Afrikaans context. That being said, the book contextualises it within a much broader South African context, so the themes actually become quite universal.

Following the release of your 2019 documentary, Skeef, and now also your book, you’ve become one of very few Afrikaans media personalities to be open and even vocal about your sexuality. Do you feel a certain responsibility to use your platform to further the LGBTQI+ cause?

It’s impossible to overstate the power of being able to identify with a public figure, particularly when that figure is actually seen in the fullest sense. When a group of people is only ever represented in negative ways, or even underrepresented, it adversely affects the way others see them, as well as the way they see themselves.

Our visibility actually becomes more about equality and inclusion when we look at it in the broadest sense, and that’s a conversation worth having! A conversation I feel compelled to highlight on my platforms (however big or small they might be).

“Growing up in a conservative family, I struggled to find anything that resembled ‘Pride’…”

In that vein, do you think it is important for queer people in the public eye to come out, and if so, why?

There is power in sharing and being visible, it is one tangible way (I believe) that we can disarm prejudice.

While coming out will always be an extremely personal decision, and people should only do it on their time, when they are ready and feel safe and comfortable to do so, my wish is that that closeted queer people in the public eye will soon realise the joy and freedom that coming out affords us. Speaking from my own experiences, life actually gets way better when we do.

You have written that it was important to you to write Skeef “in the context of the discrimination and conservatism of the Afrikaans community”, the ire of which you probably experienced once or twice in your own life. What has been your experience of the Afrikaans community’s general attitude towards homosexuality, following the research you did for the doccie and the book?

Unfortunately, there is still a lot that needs to be done, and the change needs to start in our communities, homes and at school.

There is a multitude of people who act with disgust and contempt towards gay people – this is even more prevalent amongst the younger generation. What happened at DF Malan a few months ago emphasises just how deep intolerance is entrenched in South Africa’s fabric, and specifically Afrikaans culture.

What my research highlighted is that we need to start having these conversations about what being LGBTIQ+ looks like from a far younger age.

Your book doesn’t tiptoe around the challenges that being gay has, but very much takes an “it gets better” approach. What would your central message be to someone who isn’t convinced that living authentically is worth the hassle of coming out?

It’s a type of paradox that we as queer people have to live with… We have to constantly reconcile being visible and living authentically with questions around our safety in a country like South Africa.

The sad irony is that our visibility and us living authentically breeds such contempt and rejection from many people in this country. It’s this same visibility that also becomes a massive sign of hope and protest in a world that is often against us.

It’s impossible to overstate the power of living authentically and coming out, even with all the hate and prejudice.

What has been the most valuable lesson you have learnt through the process of making the documentary and writing the book?

The process reminded me of the community’s resilience and strength. I’ve always been hopeful about our lives and the future, and both the book and the film cemented that for me. It made me want to wave my rainbow flag even higher and louder…

The process, especially the book, put me on a massive journey of un-shaming and finding Pride – a journey that becomes crucial when doing this type of work.

Growing up in a conservative family, I struggled to find anything that resembled ‘Pride’.

This is why living a life of authenticity has become a non-negotiable for me. I have embraced the rainbow and any other overt displays of Pride because it’s actually so cathartic. I’m intentionally immersing myself in people, symbols, actions and anything else that so disgusted me as a child. By doing this, I’m showing my younger self that there is no shame in just being.