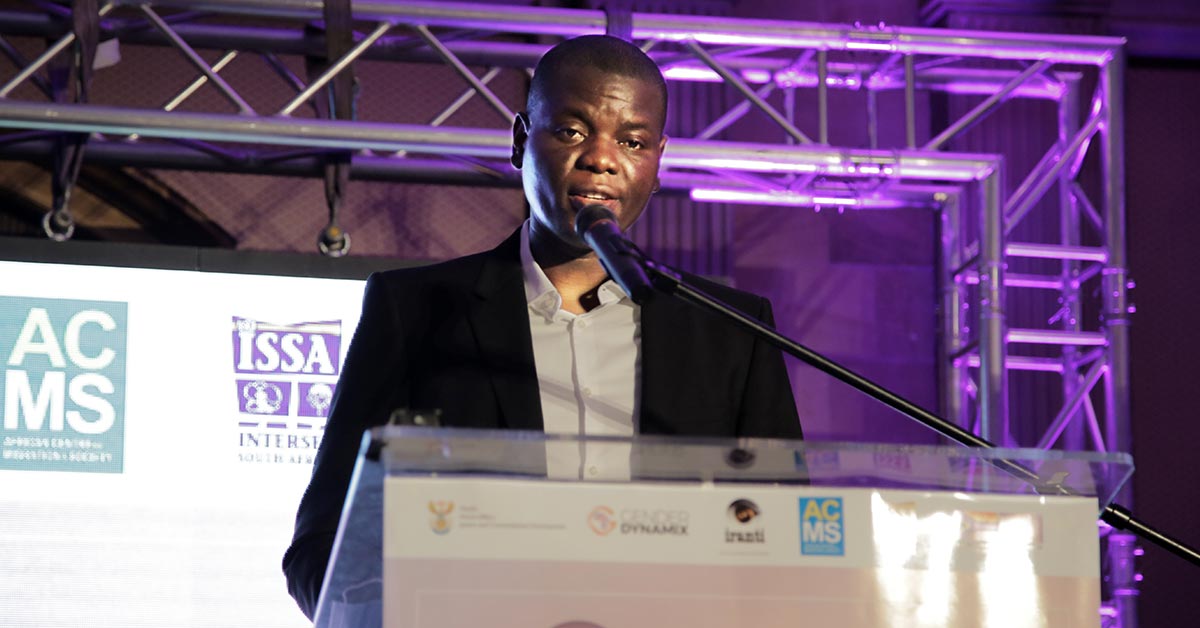 A landmark two-day conference in Pretoria has seen South Africa, the European Union and leading civil society organisations initiate a policy review process to improve access to rights for transgender and intersex people.

The SA-EU Dialogue on Policy Improvements for Transgender and Intersex Persons this week brought together various government departments, EU representatives and CSOs including Iranti, Intersex SA, Gender Dynamix and the African Centre for Migration and Society (ACMS).

Justice and Correctional Services Minister Ronald Lamola was one of the high profile officials to attend the dialogue. He described it as an opportunity to share views on how to improve policies to protect transgender and intersex persons in South Africa.

“The outcomes of our collective ideas and reflections today must culminate in distinct and progressive changes in the lives of transgender and intersex people,” said Minister Lamola.

“In the year in which we mark the 25th anniversary of our Constitution and 30th year of the [Johannesburg] Pride March, I think it is historically fitting for us to place this Constitutional provision on trial at this conference. In placing this provision on trial, we must recognise the positive strides we have made towards its implementation,” he added.

Lamola also acknowledged that much still needed to be done. “Legislation must never be static, or cast in stone, the law should be dynamic and should adapt as society advances,” he said.

“I would like to add one more recommendation and that is that all officials in government must undergo gender sensitivity training, and in particular become familiar with what LGBTIQ+ persons require and how best to serve them,” he said.

In his opening speech, Deputy Minister of Justice and Constitutional Development John Jeffery noted that the meeting was a historic event.

“Transgender and intersex persons have very distinct legal needs and often face enormous challenges when trying to access services or care that most people take for granted, such as accessing gender-affirming documentation, like identity documents. Intersex persons are also subjected to unnecessary surgeries and medical interventions which deny them their right to bodily autonomy,” said Jeffery.

“Transgender and intersex persons often struggle to access health care and face unfair discrimination in access to education, sport, employment and services. We need to change that – and we can change that,” he asserted.

The EU Ambassador to South Africa, Dr Riina Kionka said the EU was proud to support the event, and commented: “There is no doubt that trans and intersex people face appalling stigmatisation and discrimination in many places worldwide. The EU actively condemns discrimination based on sexual orientation, gender identity and expression.”

Deputy Director-General for Civic Services at the Department of Home Affairs (DHA) Thomas Sigama, speaking on behalf of DHA Minister Njabulo Nzuza, stated that “It is important to send an unambiguous and unapologetic message to all citizens and residents of our beloved country that transgender and intersex rights are human rights.”

In February, the DHA published proposals for a new official identity management policy, which seeks to be inclusive of transgender and intersex South Africans, including the possibility of implementing gender-neutral identity numbers.

Sihle Mthiyane, DHA Chief Director: Policy and Strategic Management, told participants the law needed to be changed to ensure everyone could access their rights. “The gender-neutral ID number will be available at birth, to avoid issues relating to intersex persons,” said Mthiyane.

On the second day of the conference, Dr Tlaleng Mofokeng, UN Special Rapporteur on Health, argued that health workers must be at the forefront of protecting the rights of Intersex people.

Presenting the keynote speech, Dr Mofokeng said that healthcare workers must “see the practice of medicine as a tool to defend and protect human rights”. She said that within all countries, marginalised individuals such as transgender and intersex people confront greater barriers to sexual and reproductive health rights compared with national averages.

“All people have a fundamental need for health care, yet inequalities in health status and access to health-care services persist and have possibly worsened,” she said.

“I state all of this to sketch a context for the multiple intersections at which intersex people live. Most often, at birth, intersex people are subjected to unnecessary, we can go further to say sometimes unethical, surgeries aimed at ‘normalising’ them through surgical interventions on external genitalia, and later in life through hormones to fit neatly into an assumed sex and then a gender binary,” said Dr Mofokeng.

“This is the beginning and sets the stage for a lifetime of violation in healthcare settings,” Mofokeng added. “To restore someone’s dignity, you have to see them as fully human. And many of our global health systems are deeply dehumanising… Autonomy is central to this because autonomy over yourself is freedom.”

Delegates at the dialogue called for action

“Many important issues around policy and legislation have been discussed,” said Deputy Minister Jeffery. “It is crucial that we maintain the momentum from this event in taking the recommendations from the dialogue forward so that we can ensure that the human rights of transgender and intersex persons are better protected, promoted and affirmed.”

Crystal Hendricks, Iranti/Intersex South Africa Programme Officer, said the dialogue was a much-needed intervention: “Intersex people deserve the right to bodily autonomy and self-determination, as well as to have all their rights promoted and protected by the state.”

ACMS’ Dr B Camminga was optimistic that the conference would lead to change. “This is an incredible and historic moment for us as the transgender and intersex community in South Africa. We are hopeful. Cautiously hopeful. For the first time, we are hearing the state say, ‘how can we ensure you are recognised?’ And not, ‘what are you willing to do to gain our recognition?’” they said.

Iranti Executive Director Jabu Pereira agreed that there had been significant progress. “This conference was truly a reflection of the power of strategic advocacy with the state in attaining our human rights as trans and intersex persons. We have a way to go but looking back we have made incredible gains,” said Pereira.

Gender Dynamix Executive Director Liberty Matthyse pointed out that the event was the culmination of almost two decades’ work. “This conference is a milestone moment that sets the stage for us to achieve gender justice in its most authentic form,” said Matthyse.

“The fact that we are all sitting here today is testimony to a deep principled commitment that we share towards an ideal – a dream – a call to action for a more equitable and just future for all, including trans, gender diverse and intersex persons,” Matthyse added.