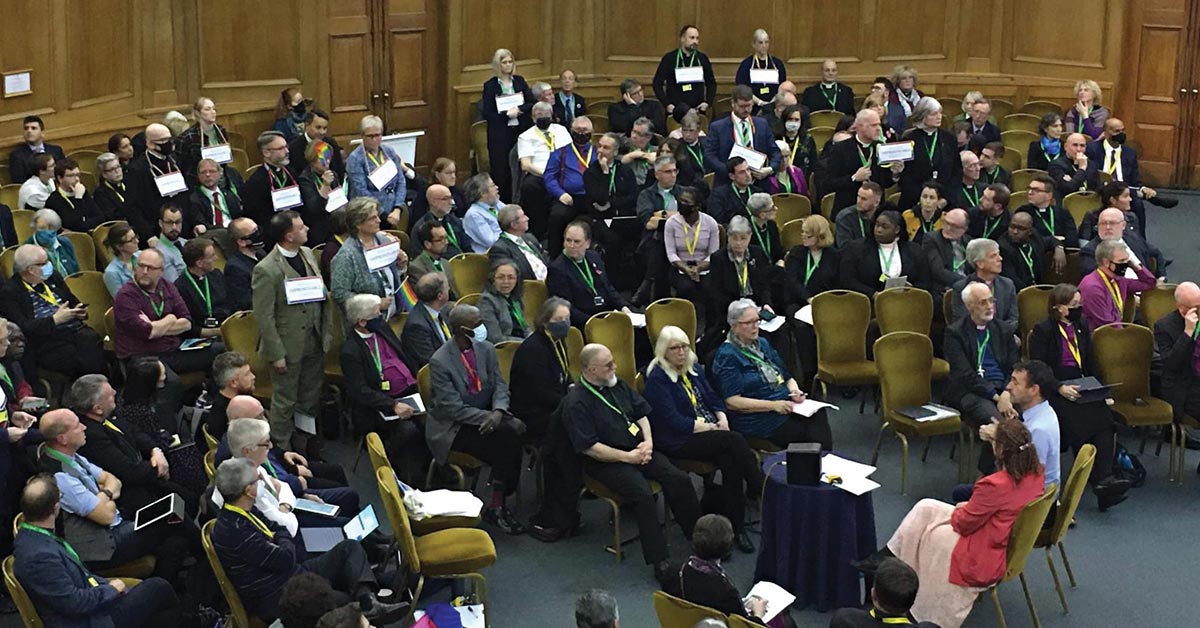 Nearly 20 LGBTQI+ members of the General Synod of the Church of England interrupted a debate to protest against the Anglican Church of Ghana’s support for new anti-LGBTQI legislation.

The synod members showed their concern about the persecution of LGBTQI+ people in Ghana by taking an unprecedented silent stand during the opening debate of the new General Synod on Tuesday.

According to a statement by the members, they stood with placards in the middle of a speech by the Canon Simon Butler, Prolocutor of the Province of Canterbury; an openly gay partnered evangelical vicar. The placards read “Soon to be imprisonable in Ghana!”

“Those of us who are LGBTQI+ in this Synod wanted to make it absolutely clear that we stand with our LGBTQI+ brothers and sisters in Ghana,” said Canon Butler about the protest. “There can be no compromise when fundamental human rights are threatened, whether by governments or bishops.”

Rev Neil Patterson, who helped organise the protest and is the Vice Chair of the General Synod Gender and Sexuality Group, commented that, “We stood in solidarity with those in Ghana, because we are people, not a problem, and deserve to be part of the conversation.”

Jayne Ozanne, a Synod member and prominent LGBTQI+ campaigner who helped draw attention to the role of the Ghanaian bishops in supporting the proposed homophobic legislation, added: “As Christians our role must always be to protect the vulnerable and those who are most at risk. We are called to be a ‘voice for the voiceless’, who in this instance are LGBTQI+ people in Ghana. There can be no excuses for homophobic legislation- not even on so-called ‘cultural’ grounds.”

In October, the House of Bishops representing the Anglican Church in Ghana said that “[we] have thrown our weight behind the anti-gay (LGBTQI+) Bill currently before the House of Parliament, Ghana.”

The bishops added: “Our support is borne out of the belief that LGBTQI+ ‘is unbiblical and ungodly’. We see LGBTQI+ as unrighteousness in the sight of God and therefore will do anything within our powers and mandate to ensure that the bill comes into fruition.”

The Archbishop of Canterbury, Justin Welby, the symbolic head of the global Anglican communion, recently also criticised the Anglican Church of Ghana for publicly supporting the horrific anti-LGBTQI+ bill.

If passed, the Promotion of Proper Human Sexual Rights and Ghanaian Family Values Bill will not only criminalise all LGBTQI+ people but will also make it illegal to advocate for LGBTQI+ rights in any way with up to ten years in prison. The bill would further outlaw any medical gender affirmation treatment, gay adoption and same-sex marriage, as well as banning any transgender person from getting married.

Under Ghana’s Criminal Code, consensual same-sex sexual relations are already criminalised with up to three years in prison.

LGBTQ+ members of Synod stood in solidarity with their LGBTQ brothers & sisters in Ghana during the first debate in this quinquenium today during a speech by Canon Simon Butler pic.twitter.com/lTuDo9Rql4