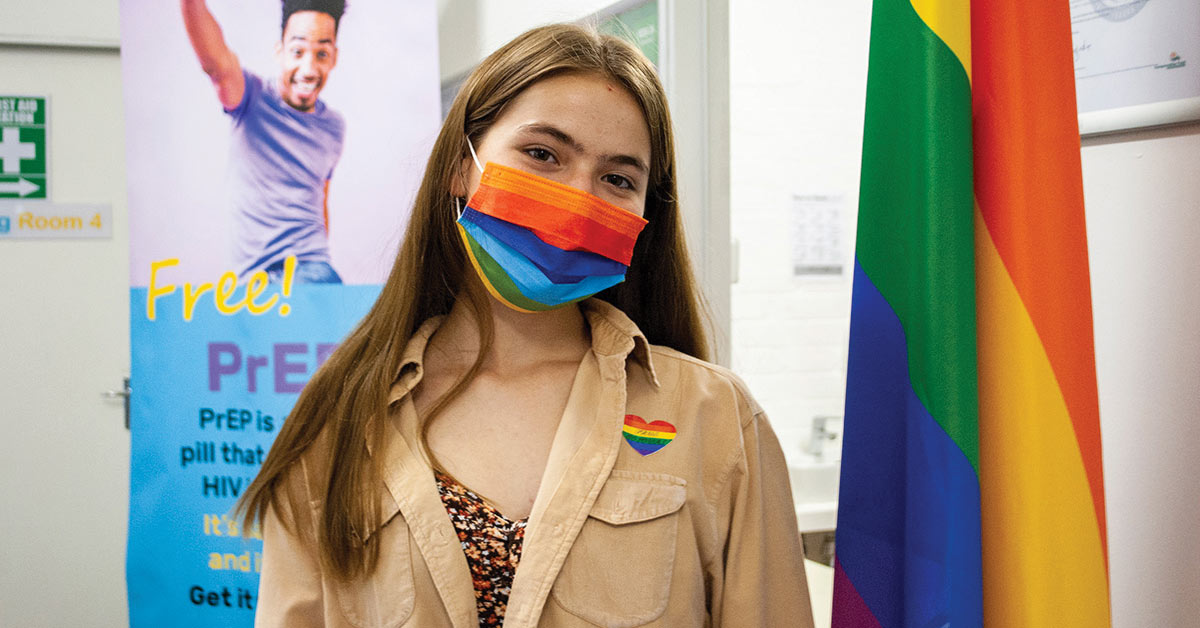 Jody Blackburn at OUT’s clinic in Joburg. Funds raised at her school will help support a homeless LGBT+ youth

Learners in Johannesburg have championed inclusion and diversity in their schools by campaigning to raise funds for the LGBT+ community.

Jody Blackburn, a 13-year-old Grade 7 pupil at Radford House in Fairland, and her mother recently visited OUT LGBT Well-being’s free clinic in Melville (funded by USAID through PEPFAR) to present a donation of more than R4,500 to the non-profit organisation.

Jody held a Pride-themed diversity day at her school where everyone who wanted to participate could each donate R20 to wear colourful clothing and a rainbow heart sticker. She collected the money and chose OUT as the beneficiary of the funds.

“I always wanted to spread awareness and acceptance, especially with my fellow students,” says Jody. “And I’ve always wanted to make the LGBT+ community feel safe, even if their parents aren’t accepting.” She adds that, “My teachers, my parents, the principal, and especially the kids in my class, were very excited for this fundraiser.”

Asked why she chose to donate the funds to OUT, the second-oldest LGBT+ organisation in South Africa, Jody replies: “I looked at their website and I really liked their values and everything they’ve done for the South African LGBT+ community.”

Jody believes that it’s important to promote diversity and inclusion in schools because “there are so many different peoples in South Africa, and if we accept people for who they are, and just show kindness, it will help our society become what we would like it to be.”

In September, the Student Diversity Committee at SAHETI School in Bedfordview also hosted a fundraiser for OUT, raising an impressive R8,000. OUT was invited to address high school learners at a special assembly to talk about the organisation’s work.

“These student-driven initiatives are inspiring and heart-warming. They show that our constitutional values that embrace diversity are taking root in our youth,” says Dawie Nel, Director of OUT LGBT Well-being in a statement. “OUT thanks all the students, parents and teachers who contributed to the fundraisers. We applaud them not only for their donations but also for promoting a culture of respect, humanity and equality.”

OUT has decided to allocate the funds raised by the schools towards assisting a young homeless LGBT+ person with their studies. “Young people are often rejected by their families because of their sexuality or gender identity and may even end up on the streets,” says Nel. “We will identify a beneficiary from among those we support at some of the city’s homeless shelters to further help them to better their future.”

Founded in 1994, OUT LGBT Well-being provides stigma-free HIV and other services to gay, bisexual and MSM communities. It also works to eradicate LGBT+ hate crimes and discrimination while assisting and supporting victims with paralegal advice and referrals.