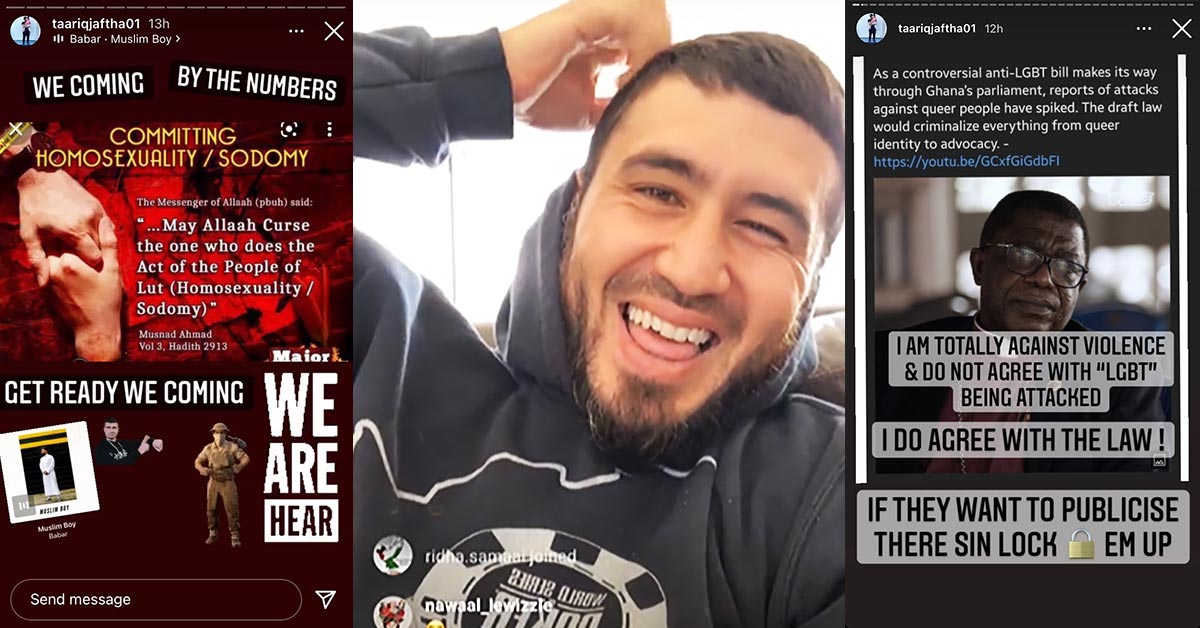 Jaftha, who is the brother of Nadia Jaftha, one of South Africa’s top social media influencers, has for more than a month been making waves on various platforms with his many hateful bigoted posts and videos.

Using his Islamic beliefs to justify his stance, he has railed against LGBTIQ+ people in an obsessive online rampage, describing them as “sinful”, “sick” and abnormal, and asserting that they “spread sin”.

In one alarming post, Jaftha shared photos of two transgender individuals and commented: “We should stop them by any means!! The 2 trannies living in sin!! Report the accounts & stop them. Let’s stop pride.”

He’s also promised to launch a range of anti-queer merchandise and has promoted the idea that LGBTIQ+ people can choose to “see the light” and change their sexuality or identity.

Blythe Stuart Linger is among those who has lodged a hate speech complaint against Taariq with the SAHRC.

Linger said in email to the commission that “in a community where we are experiencing an unnecessary amount of death and violence due to hate crimes, we do not need this… Not only does it infringe on our human rights, but it is inciting violence against the people of the queer community.”

In response, the SAHRC confirmed that the “commission is aware of this matter and is already investigating of its own accord.” It added that, “We have received dozens of complaints and are taking the matter very seriously.”

The SAHRC told Linger that it “will provide Mr Jaftha an opportunity to answer to the allegations against him, which process takes up to a month in terms of the Commission’s Complaints Handling Procedures (as we need to provide the Respondent with 21 days to respond).”

Once it receives Jaftha’s answers, the commission “will then assess and decide on further steps.”

Meanwhile, it appears that most of Jaftha’s offensive social media accounts have now been suspended or deleted. Other accounts on Twitter and Instagram, however, still appear to be run by Jaftha.

On 12 December, one profile’s post stated: “Merchandise coming soon. Working on new account. I personally deactivated all accounts, no one contacted me. No one closed my accounts. I am opening new accounts stay tuned.”

The profile also includes a post directing social media users to a private Instagram account that affirms “righteousness over rights” and where followers can supposedly “hear the truth.”

Cape Town-based LGBTIQ+ organisation Triangle Project has slammed Jaftha for his dangerous onslaught against the community.

Cox added: “Mr Jaftha would do well to critically think about what he is putting out. It has real consequences for people who are LGBTQIA+. We do not need to be witness to any more attacks, rapes and murders of LGBTQIA+ people because of prejudice and hate.”

Last month, Nadia Jaftha told MambaOnline that she does not support her brother’s anti-LGBTIQ+ campaign and believes in “equality and that you can love anyone who you love.”