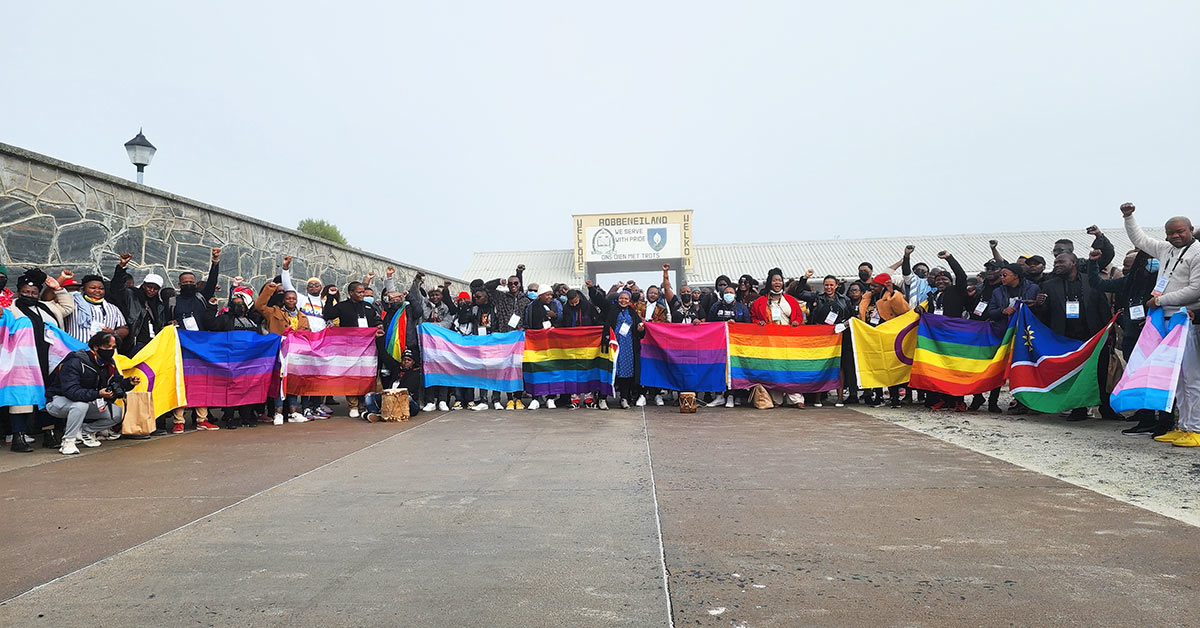 For the first time, the rainbow flag has been flown on Robben Island where Nelson Mandela was imprisoned for 18 years.

On Wednesday 25 May, which is marked as Africa Day, almost 200 LGBTIQ+ activists from across southern Africa braved cold and foggy weather to travel to the infamous landmark, located just off the coast of Cape Town.

Organised by The Other Foundation as part of its 2022 Kopano LGBTIQ+ gathering, the activists held a Pride March from Murray’s Harbour to the flagpoles near the entrance of the former prison.

There they were greeted by the Robben Island Museum’s enthusiastic Marketing and Tourism Senior Manager, Siphuxolo Mazwi. “The queer community is welcome on Robben Island,” Mazwi exclaimed, adding that she hopes that the Pride will become an annual event.

The rainbow flag was then raised by Virginia Magwaza Wenjini, founder of Parents, Families & Friends of South African Queers (PFSAQ).

Visiting the site of Mandela’s (and that of 3,000 other political prisoners’) imprisonment was an apt initiative considering the Kopano conference’s theme of “Rollbacks, Resilience, and Reinvention”.

“We believe that holding this year’s kopano [translated as a family or community gathering to discuss an important issue] in Cape Town in partnership with Robben Island Museum, which is a symbol of the triumph of the human spirit over adversity, will further advance the struggle for the freedom, equality, recognition of human dignity, and social inclusion of LGBTI people,” said Neville Gabriel, CEO of The Other Foundation.

Abigail Thulare, CEO of the Robben Island Museum commented: “Our resilience has been tested and in reinventing our offering, a collaboration with the LGBTI community breathes colour into that commitment of inclusivity and diversity in the experiences we create.”

After raising the flag, the activists were given a tour of the prison, led by former prisoners who now work as tour guides. The experience was a powerful and deeply emotional one for the visitors, highlighting the sacrifices made by so many on the path to freedom.

Held every two years, the week-long Kopano conference is being hosted in Cape Town. It is a platform for LGBTIQ+ activists from 13 southern African countries to come together to share their experiences, challenges and successes in the wake of the devastating Covid-19 pandemic. The event comes to an end on Friday.