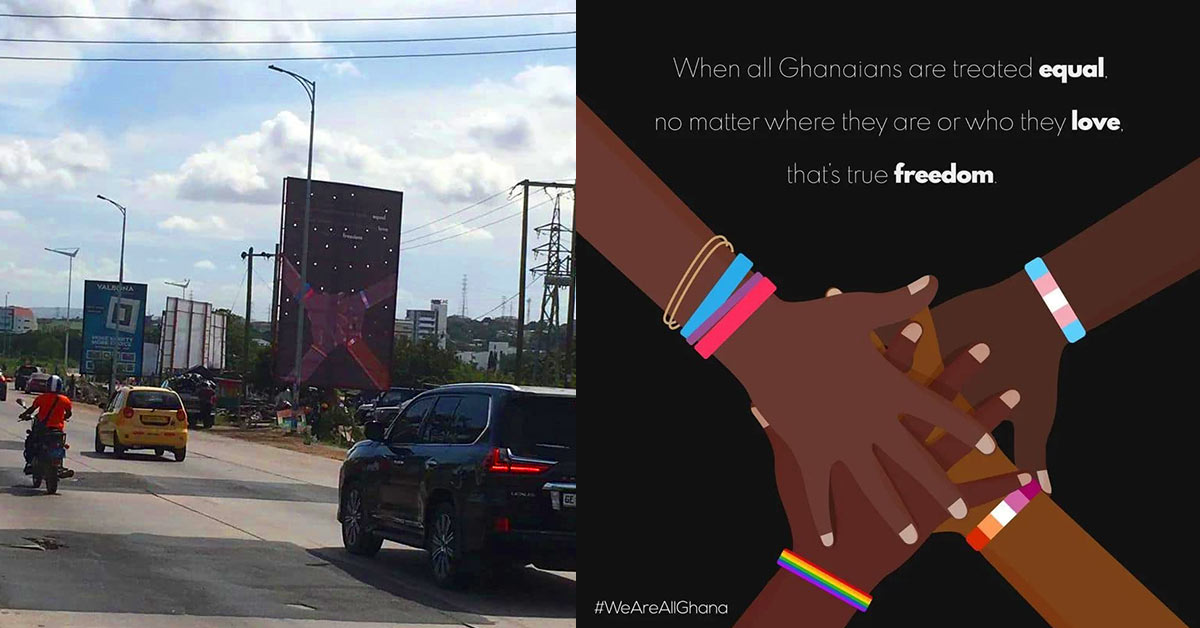 A billboard put up by an LGBTQ+ group to promote tolerance and diversity in Ghana has been torn down after being condemned by politicians and religious leaders.

The billboard was erected on 20 May in the capital Accra by the organisation LGBT+ Rights Ghana. It depicts four hands over one another with the text “When all Ghanaians are treated equal, no matter where they are or who they love, that’s true freedom,” along with the hashtag #WeAreAllGhana.

It was one of a series of billboards placed in three cities by LGBT+ Rights Ghana with the aim of reminding “Ghanaians of our culture of love, tolerance, and acceptance of diversity,” said the group.

The Accra billboard, situated along the Tema highway and opposite the Accra Mall, quickly became the target of homophobic politicians

On 6 June, Elikem E.K. Kotoko, a member of opposition party, the National Democratic Congress took to social media to draw attention to the billboard. LGBT+ Rights Ghana said he peddled “false narratives” and attempted to politicise the billboard.

A few days later, members of the Coalition for Proper Human Sexual Rights and Family Values, accompanied by some of the proponents of the horrific anti-LGBTQ+ bill being considered by the country’s parliament, visited the site of the billboard.

“They granted interviews with false narrations outside of the intended messages of love, diversity, and tolerance imprinted on the billboard,” said LGBT+ Rights Ghana.

Soon after, the billboard was pulled down by an unknown person leaving just the sign’s empty frame.

The organisation noted that it is legally entitled to put up the billboards. “There is currently no law in the country that criminalises advocacy of vulnerable groups,” said the group, adding that it is “well within our rights as Ghanaians to advocate for the rights and freedoms of LGBTQ+ Ghanaians.”

Earlier this month, the National Coalition for Proper Human Sexual Rights and Family Values, and Advocates of Christ Ghana launched their “Rainbow Campaign” to “reclaim” the rainbow from the LGBTQ community.

At the launch, speakers warned Ghanaians that homosexuality would lead to God’s wrath.

“In our generation, it’s unfortunate humanity has sunk into sin more with men sleeping with themselves and women with themselves and with animals and sometimes taking videos of them, and having these things legalised,” said Apostle Professor Opoku Onyinah, the former chairman of the Church of Pentecost.

The pending Promotion of Proper Human Sexual Rights and Ghanaian Family Values Bill will not only criminalise all LGBTQI+ people but will also make it illegal to advocate for LGBTQI+ rights in any way with up to ten years in prison.

The bill would further outlaw any medical gender affirmation interventions, gay adoption and same-sex marriage, as well as banning any transgender person from getting married.

Consensual same-sex sexual relations are already criminalised with up to three years in prison under Ghana’s existing Criminal Code.